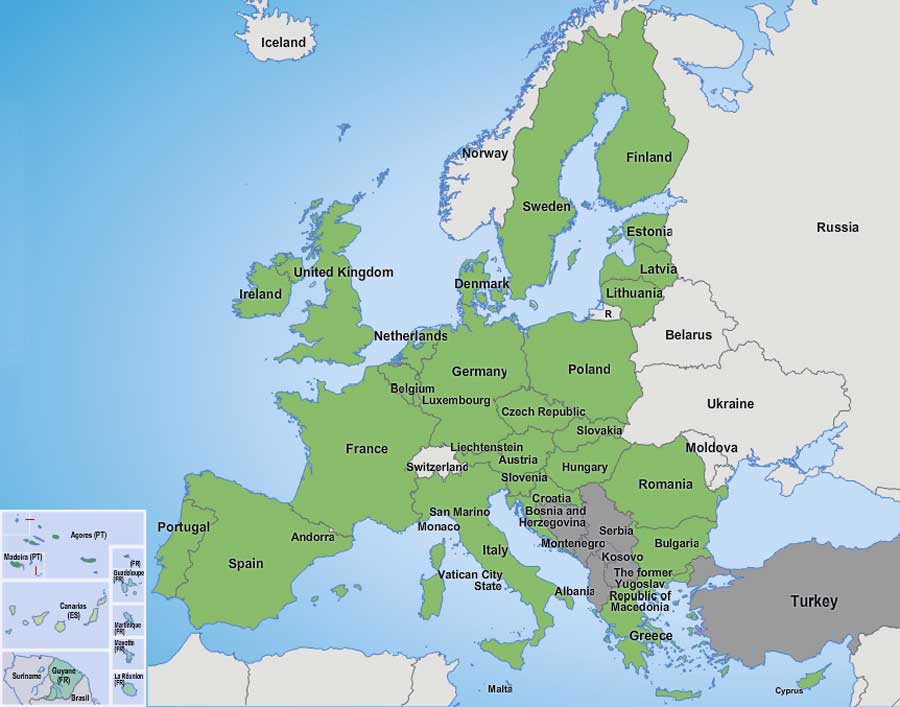 Since the foundation of European Union and the treaty of Rome in 1958, the question of expansion of the EU has always been a hot topic.  Beginning with the “first Six”, the membership has now reached to 28, with the Croatia the newest member. The need of members in the European Union has always been debated in the name of “European Integration”. This debate is as old as the EU.

It has been years, EU has been trying to expand and broaden in many parallel ways. But with the Treaty of Maastricht which took effect in 1992, the broaden approach has stopped…

Every time EU accepts new member, the discussion of EU’s expansion hits the media. Looking at the past and understanding what we were, brings us to the next question of what we want to become now, and what we want to become in the future. European Union began with the “Inner Six” (Belgium, France, Germany, Italy, Luxembourg and Netherlands. Denmark, Ireland and the United Kingdom joined the EU in 1973, while Greece joined in 1981, and Spain and Portugal became member of the EU in 1986.

The debate on “probable” nations for the European Union remains undiscussed.

It has been years, EU has been trying to expand and broaden in many parallel ways. But with the Treaty of Maastricht which took effect in 1992, the broaden approach has stopped, slamming the doors of memberships through Amsterdam and Nice treaties while making little progress. The expansion however is moving briskly. On May 1, 2004, ten new countries joined the EU, making EU’s most significant expansion since its formation in 1957. However, this expansion is not “just enough”.

The huge gap between the “wider enlargement and deeper integration” will have to be prioritised by EU before accepting a membership.

The “rapid” enlargement had just made news; the new enlargement policies attracted the world: the coming of Bulgaria, Romania and Croatia; and the efforts to cope with the Balkans; and the task of bringing Turkey to the EU made most of the headlines. Meanwhile, the list of countries seeking accession keeps getting longer. Controversial nations like Ukraine tried all the way as Belarus and Moldova waited for their turn. Experts say Morocco might make a move.

The huge gap between the “wider enlargement and deeper integration” will have to be prioritised by EU before accepting a membership. To simplify the above statement, the EU has to answer a lot of questions, from becoming a large political union to expanding policies.

The Ideology of Expansion

We all would agree to the fact that European Union brought more than just stability to Europeans, it bought – stability, prosperity, democracy, human rights, fundamental freedoms, followed by the rule of law.

These are not just abstracts, these are working principles. They have affected millions of European lives. The single market of the “Euro” has brought – economic growth, created jobs, safer products, and lower prices, followed by vast choices in some crucial sectors like telecommunications, banking and air travel, among others.

But let’s just not limit ourselves in wealth and improved standards. EU has made certain values. It has become a family of European countries that work together for peace and freedom, prosperity and social justice. They defend these values. They are a group of nations that respects each other’s sovereignty, and respect the diversity.

Some say Expansion is the most subtle suit of the EU, while many experts disagree otherwise. It is not hidden that the establishment has brought safety and security in Europe since its formation.

As written in the fundamental policy and beliefs of the European Union, the Union promotes “freedom, democracy, equality, the rule of law and respects the fundamental human rights”. Undermining these basic beliefs by any nation brings severe discredit to the EU and its policies, hence EU advices all its member nations to ensure the basic policies are followed from time to time. Most nations are a part of this family due to some or the relations in the past. Once they have met with the democratic and economic criteria, EU let’s them in.

Some say Expansion is the most subtle suit of the EU, while many experts disagree otherwise. It is not hidden that the establishment has brought safety and security in Europe since its formation. However shutting the doors on Balkans, Ukraine, Turkey or the nations in the East might compromise Europe’s left flank. With a most significant role to play in international politics and economics, a bigger and more strategic EU is what everybody hopes. Strategically, countries like Turkey with its 75 million people and dynamic economy, followed by industrial power horse like Ukraine could bring in a huge power boost to Europe.

The success story of expansion is little complicated to understand, has most of the times the hidden truth gets covered over speculations of which big nation will be next? It all began with the traditions of openness, social justice and environmental awareness that Europeans gained through their history; Southern and Eastern Europe reminded the good old days of freedom and value for democracy. Many view cultural diversity as Europe’s greatest treasure.

The Communication strategy of Expansion was adopted by the European Commission in May 2000. Then the strategy of expansion was focused on two main points: the pre-accession strategy (the preliminary reforms for the member nation) and the accession negotiations. The Communications strategy is now in its third phase. The first comprehensive report, “EXPLAINING ENLARGEMENT” which was published in March 2002, outlines the progress made in May 2000. Since then more conceive report has been transmitted.

The process has assisted the EU nations in many ways, stabilising the EU’s finances. Thus EU enjoys great trade and employment.

If we look at some examples of Eastern and Central Europe, stable democracies have appeared, with democratic institutions and respect for minorities. The economic reforms in these nations have resulted in high economic growth (higher than the EU) with many employment opportunities for the youth. The process has assisted the EU nations in many ways, stabilising the EU’s finances. Thus EU enjoys great trade and employment.

Many experts believe that the EU has reached to saturation, where at one point of time, it has to stop more admissions. It will not be wrong to say that EU has reached to a point of “institutional grid lock”. More payloads of member nations would eventually result in advisable results, poor decision making, turning EU into a miniature UN.

Expansion will cost EU its decision making, actions (for example the European Commission and the Court of Justice) and will hamper the benefits enjoyed by member nations. Expansion is very risky, until and unless there is a voting segment added to it, within the council of ministers in an effort to avoid deadlock in decision making followed by the size of national commission members (20 nations today).

The demand for more expansion has perhaps diluted the sole objective of the EU. The wider Europe has now been replaced “very wider and riskier” Europe. The larger it grows, the less likely it shall stay politically united. Many experts believe that the EU has reached to point where a line must be drawn while making EU around the core European nations that are really believe in a union.

Potential candidate such as Kosovo have been willing to become a part of EU. On numerous occasions it has shown urgency, which surprisingly has been ignored by the decision makers of EU.

Another important discussion that we are left is the “the urgency to increase democratic governance within the EU”. While increasing sovereign states in the EU, chances of decision making collapses as nations will fail to come to a unanimous solution. If we go with the public opinion, the EU leaders are quite warm as compared to the general public, which is quite hostile in this segment. This “anxious” in making decisions will soon result in hostile environment in the EU as angry tax payers in the East and unemployed youths in the West will soon come out in the open, if the depression regions are cut, destabilizing the EU and reversing the benefits that EU has caused till now.

The “Nation” and the “Nation State”

The question of all member nations followed by official applicants and those “probable” the EU has brought down its focus to only those nations that the EU feels comfortable in letting in. The focus should also be on those nations that are willing to become a part of EU. Hence the focus should be on “nations” rather than “nation states”.  Hence a differentiation is a must whether a nation or a nation state should qualify or not.

Potential candidate such as Kosovo have been willing to become a part of EU. On numerous occasions it has shown urgency, which surprisingly has been ignored by the decision makers of EU. Some say the EU has ignored this obligation while some present legal and political arguments for Kosovo’s willingness.