Eurofighter: Objective to win India as a key partner

Interview with Bernhard Gerwert, Chairman of the Supervisory Board of Eurofighter GmbH and CEO Cassidian Air Systems

How do you see Eurofighter Typhoon positioned in India’s MMRCA competition?

We are convinced that we are very well positioned because all the strengths and advantages of our offer are well reckognized by India’s decision makers. Eurofighter Typhoon is clearly the technologically most advanced combat aircraft on offer for the MMRCA tender. My impression is that its superior combat performance is well understood in India. It is encouraging that the flight trials went very well for us and according to plan, including the weapons testing by Indian Air Force (IAF) pilots in Germany and the United Kingdom. 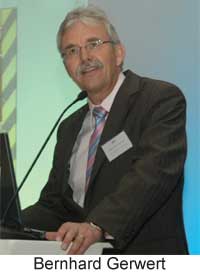 In addition to this most modern combat aircraft available on the world market, we offer an unrivalled industrial and technological partnership which meets India’s strategic goals: Choosing the Eurofighter Typhoon will catalyze the development of India’s domestic defence and aerospace industry, thereby considerably reducing its current dependence on imports.

Instead of remaining a mere buyer of the aircraft and its parts, we envision India as a future key supplier to the global Eurofighter Typhoon programme. As a true, new industrial partner, we would like India to co-develop and co-produce future capabilities for the Eurofighter Typhoon.

So you are confident that Eurofighter Typhoon is well placed to win?

Absolutely. Getting the best and most advanced combat aircraft technology on offer and partnering its further development – this is a great opportunity for India. Our value proposition is increasingly recognized in India, and our campaign is making constant progress. We are excited at the prospect of winning India as our next partner.

Which industrial benefits can India expect from the EPCs?

What makes you so sure to be able to deliver on this ambitious industrial partnership promise?

Eurofighter Typhoon is the only truly international combat aircraft in the world: Europe’s leading defence companies – EADS, BAE, Systems, Finmeccanica – and more than 400 suppliers have pooled their core competences to create it. Our success is based on cross-border cooperation we live every day, by sharing sensitive technologies and know-how. It is precisely this spirit of mutual trust and technology sharing that we will extend to India, once it accepts our offer.

Even before the MMRCA tender is awarded and independent of a type selection, Cassidian, the security and defence division of EADS, has opened an Engineering Center in Bangalore. The fact that we are the first major defence and security company to transfer high value defence R&D to India underlines our trust in and our commitment to India as a partner.