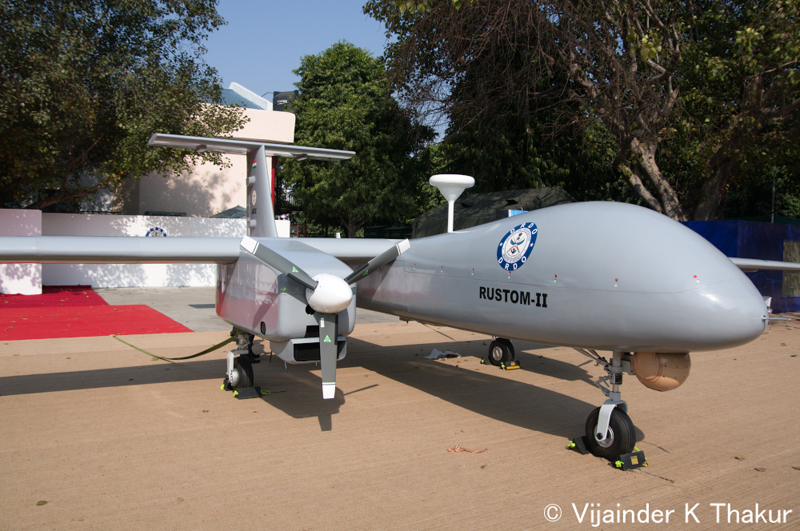 Employment in our environment

UAVs are great force multipliers and there must be synergy between the three services to optimise their employment. [i]They could be employed for multifarious tasks fruitfully. Presently our three services have limited numbers of these aerial vehicles and each service is looking towards its individual requirement.  In as much as the Army is concerned the Herons are performing exceedingly well in surveillance missions in the high altitude regions as also providing critical information to manoeuvre elements in our Southern deserts. They would be providing the target inputs for our missiles and also provide Post Strike Damage Assessment for engagement of targets. The Herons have been able to fly in dual role and thereby fly at ranges of 400 km, yet in high altitude areas screening problems do occur. This can easily be overcome by providing Satellite Communications (SATCOM) to these UAVs which apart from overcoming the problem of screening would enhance the range of the UAVs to 1,000 km. The Searcher mark II is being used in the mountainous region as also in the plains and semi deserts. It is to the credit of our UAV pilots that they have optimised the aerial vehicle successfully under our conditions. They have provided excellent inputs about any intrusions on the Line of Control as also on issues pertaining to terrain which assist us in operational planning. The issue which is of concern is the quality of pictures obtained while using the Synthetic Aperture Radar (SAR) does not give us a clear indication of the object. Recent international improvements in SAR provide a clear image of the object. As most of the militants be it in the North or North East have their hide outs in areas of thick foliage, there is a need to obtain a high quality of SAR devices to generate good images which would lead us to militant camps with precision. The Searcher Mark I variety is a short range UAV which is being suitably used in the hilly regions and plains. The Nishant an indigenous product manufactured by DRDO which is launched from a vehicle and recovered by parachute is possibly under induction and would be utilised in the plains. All UAVs presently held by the Army are being controlled at the operational level and serve the needs at the higher level. There is a dire requirement of UAVs at the tactical level which needs to be provided to force multiply results at the ground level for undertaking missions with accurate intelligence. Further in our environment there is an immediate need to weaponise our aerial platforms so as to destroy targets. UCAVs are operating in Afghanistan and causing accurate destruction of pin point targets. This has led to deaths of numerous top leaders of Al Qaida and the Taliban, thereby reducing the potency of the establishment.

Need For UCAV in Indian Army

The Indian Air Force is currently equipped with Searcher Mark II, Herons and in the process of inducting the UCAV Harop. The tasks visualised are Surveillance and destruction of selected targets by loitering missiles and PSDA. Searcher Mark II and Heron are similar to the systems held by the Indian Army while Harop is a loitering missile capable of seeking targets and destroying them with pin point accuracy. Harop is also described as a self destructive Killer drone. Harop can be used in high density conflict and counter insurgency with 1000 km range and six hours endurance. It can be launched against land based and sea based targets. The drone loiters over the target area and attacks the targets, over which it undergoes self destruction. The UCAV detects strong pulses from targets such as missiles, radars and hits at the source. It is possible to launch the Harop from ground, sea and air.

The Indian Army needs UCAVs for its battle requirements. The versatility of the UCAV has been demonstrated particularly in strikes against terrorist camps in Iraq and Afghanistan. India needs the UCAV particularly for surgical strikes across the Line of Control apart for surveillance missions. Further we have to note that China has already featured its Chang Hong-3 and Chang Hong -5 UCAV platforms in various defence exhibitions in recent years. Considering China’s developments in this field, the day is not far when Pakistan will receive these Chinese built aerial systems.

In as much as the Army is concerned at the strategic and  operational level there is a requirement for UCAVs and short range loitering missiles. The UCAVs could be formed on the Herons each of them mounted with two Fire and Forget missiles. Each divisional artillery brigade must have a battery of UCAVs comprising of eight aerial systems. Further each Corps must have a Loitering Missile Battery comprising of eight missiles with associated ground systems. At the tactical level there is a need for Mini UAV which would be hand launched have an endurance  of two hours, range of 10 km and have a pay load which can provide good details over the area the vehicle operates. In the initial stages it would suffice if each infantry battalion, combat group and artillery regiment be provided with two systems each having two aerial vehicles.

While the requirements are clear, the moot point is what is the road map for their procurement. The DRDO, since a long indefinite time, is developing Rustom, a Medium Altitude Long Endurance (MALE) UAV and Aura a UCAV.[ii] Any process undertaken must meet time lines, as inordinate delay would be operationally not acceptable. The UCAV and the loitering missile are being produced by Israel who are setting up joint ventures with DRDO. It would be prudent if our inescapable requirements be sourced from the Original Equipment Manufacturer and subsequent requirements be delivered by Joint Ventures.  The other development issues could be examined by the Army in conjunction with DRDO in a deliberate manner. It is recommended that the issue be accorded Priority.