Employment of INS Vikramaditya for Military Diplomacy and Power Projection 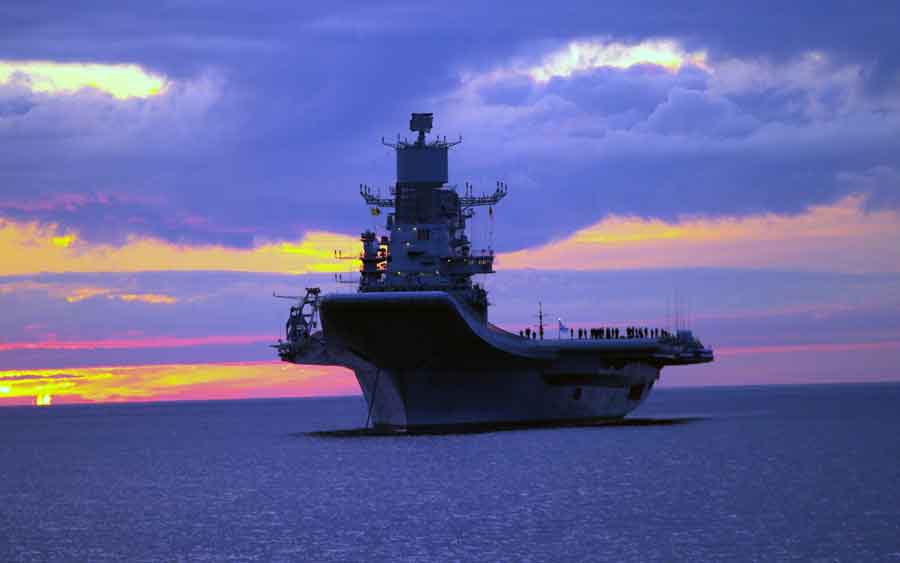 INS Vikramaditya a $2.33 billion refurbished aircraft carrier was acquired recently from Russia in November 2013 and is based at Karwar Naval Base on India’s Western Sea Board. This 44,500 ton Kiev Class aircraft carrier having  a range of 7000 nautical miles is the biggest ever warship inducted in the Indian Navy and packs a formidable punch carrying 24x MIG-29 supersonic  fighter aircrafts having a range of 1300 Km and 10x Kamov-31/Kamov-28  anti submarine warfare and maritime surveillance helicopters. INS Vikramaditya, besides providing a strategic capability to the IN, meets the IN’s requirements of having a viable carrier battle group in a true sense and is ideal for military diplomacy and power projection roles.

The IN besides its primary war time role, like all other navies has traditionally been employed for military diplomacy. Basically military diplomacy is the use of military in diplomacy as a tool of the nation’s foreign policy and is the soft usage of hard power. As part of the military diplomacy the tasks which are generally undertaken by the Navy are goodwill visits by warships by making port calls in friendly foreign countries and participating in joint naval exercises. The other peace time operational deployments being undertaken by the navies are maintaining order at sea, security of SLOCs, anti piracy operations, deterrent patrols, disaster relief, rendering humanitarian assistance, evacuation of own diaspora in times of distress and providing military assistance to friendly regimes in a crisis situation.

India’s areas of strategic and maritime influence and interest range from the Eastern Coast of Africa  through  the Indian Ocean Region (IOR),  Malacca Straits, South and East China Seas, Eastern Pacific Ocean and up to the Southern Pacific Ocean. The Asia-Pacific Region comprises the area of Malacca Strait and East up to Japan-New Zealand. This region is fast emerging as the world’s new centre of gravity, its importance is further enhanced due to the heavy volume of merchant marine traffic flowing through this area, there are large trade and economic interests for India and it is part of  India’s  Look East Policy; and stability in the region is essential for the security of SLOCs. The IOR is an area of concern for India as this region plays a key role in determining India’s policy perceptions and is an important element in her security calculus. The world’s busiest trading routes pass through the Indian Ocean as 35% of global trade takes place involving 100,000 ships transiting the sea lanes of the region annually. India’s interests in the IOR are energy security, ensuring influence/leverage in OIC, maintaining strong strategic ties with Iran as it provides land access to Afghanistan and CAR and safety interests of the large Indian diaspora in the Middle East. Thus there is a need for India to ensure the stability of the region from non conventional threats, ensure security of the SLOCs, be part of anti piracy operations and maintain order at sea. India’s initiative in this regard has been the Indian Ocean Naval Symposium (IONS) organised in February 2008 which provides the forum for maritime confidence building measures and capacity building to address various asymmetric and transnational threats in the IOR. Since 2008 IONS is being held biennially.

The prevailing strategic and security environment in the Asia-Pacific Region is of concern on account of China’s assertiveness, growing naval power and maritime boundary and island territorial disputes. The disputes in South China Sea involve China and the ASEAN States (especially Vietnam). In the East China Sea, China has disputes with Japan and South Korea and lately China has been very aggressive in her claims over the Senkaku/Diaoyu Islands and unilaterally establishing Air Defence Identification Zone. Considering this situation it is in India’s interest that military diplomacy tasks first be undertaken in this region by IN’s carrier battle group having INS Vikramaditya. This military diplomacy role should be with the aim of show casing India’s naval and power projection capabilities, enhancing military cooperation with the ASEAN states (especially Vietnam), South Korea, Japan and Australia; instilling confidence in the region regarding India’s strong commitment/will in countering China’s assertiveness, influence and growing naval power. INS Vikramaditya for this long deployment of 3-4 months should be grouped with the warships of the Eastern Naval Fleet and this carrier battle group should include an amphibious complement.

INS Vikramaditya provides the much needed strategic dimension and the lethal punch to India’s existing amphibious capability as part of joint expeditionary force capability for power projection in her strategic and maritime areas of influence/interest.

The amphibious complement to consist of INS Jalashwa (Landing Platform Dock) and a Landing Ship Tank  having an Infantry Battalion, a mechanised company with ICVs, a troop of tanks and a field artillery battery embarked which are earmarked for amphibious role. It is important to show case the amphibious force elements as it exponentially enhances the power projection capabilities of any naval task force as amphibious flexibility is the greatest strategic asset that sea power possesses and the amphibious landing is the most powerful tool that a naval task force can have.  INS Vikramaditya led carrier battle group besides making port calls in this region, must  conduct quadrilateral joint naval exercises involving Australian, Indian, Japanese and South Korean navies and also have joint naval exercises with the navies of ASEAN States. The level of exercises and participation could be moderated keeping China’s sensitivity in view. Next year a similar military diplomatic initiative should be undertaken in the IOR and the Persian Gulf. These military diplomatic initiatives should become a regular feature so as to counter Chinese influence and instil confidence in the Asia-Pacific Region and the IOR regarding India’s strong commitment and will.

India being a regional power and aspiring to be a global player by 2020-2025, besides safe guarding and furthering her national interests, has to shoulder responsibilities and obligations in keeping with her status in the region and the commity of nations. To be prepared for these commitments India needs to demonstrate/show case her power projection capabilities which would also supplement/compliment her diplomatic and political initiatives. Towards this end, INS Vikramaditya provides the much needed strategic dimension and the lethal punch to India’s existing amphibious capability as part of joint expeditionary force capability for power projection in her strategic and maritime areas of influence/interest. The Falklands War is an excellent example of a nation’s strong will and resolve to restore its sovereignty over far flung island territories by way of demonstrating a credible power projection capability by means of an expeditionary force over a distance of 12,800 Km by sea. The air power proved to be of critical importance during the conflict. The Royal Navy aircrafts were very effective in providing air support as the aircraft carrier of the of the British Joint Expeditionary Force was stationed at a very short distance from the islands and its aircrafts could operate with greater loiter time on the targets while the aircrafts of the Argentinian Air Force operating from Argentina at almost their extreme radii of action were not that effective. This clearly brings out the importance of an aircraft carrier with a formidable punch forming part of an expeditionary force for providing effective air support which is very vital in such operations.