EMP Weapons and the New Equation of War 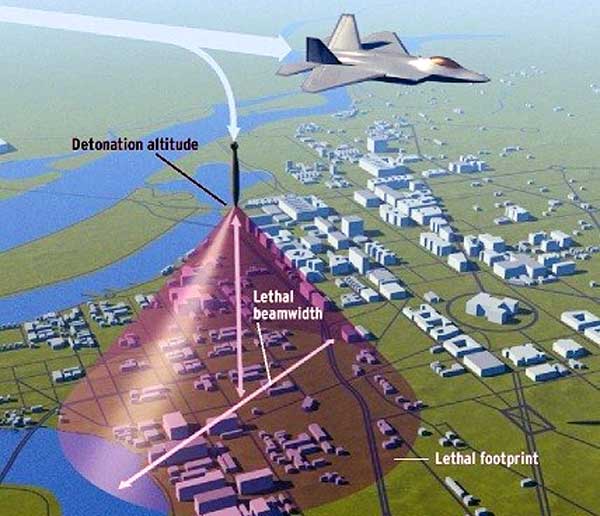 An electromagnetic pulse (EMP) is an intense burst of electromagnetic (EM) energy that causes, or can be used to cause, damage. Though natural EMP is always noticed as disturbances on the radio during lightening, much more powerful EMPs are generated by solar geo-magnetic storms. EMPs can also be generated, and artificially through nuclear explosions, or non-nuclear radio frequency weapons.1 Electric and magnetic fields resulting from such intense EMPs induce damaging currents and voltage surges in electrical/electronic systems, burning out their sensitive components such as semi-conductors.

The existence of a powerful man-made EMP was first proven during the first few nuclear tests. In 1962, the US conducted a high-altitude nuclear test code-named ‘Starfish Prime’. A 1.4 megaton weapon was detonated 400 kilometres above Johnston Island in the Pacific Ocean. Electrical equipment more than 1,400 kilometres away in Hawaii were affected by the EMP generated by the test. Street lights, alarms, circuit breakers, and communications equipment all showed signs of distortion and damage.2

More tests by the US and the erstwhile USSR yielded similar results, with even underground cables suffering damage. Seven low earth orbit (LEO) satellites failed in the months following the Starfish Prime test, as residual radiation damaged their solar arrays and electronics.3 The enormously devastating effects of EMP were only then realized. This led to the further development of nuclear bombs optimized for EMP effects, rather than physical destruction.

The use of nuclear EMP weapons during hostilities between states is likely to be fraught with risks. High altitude nuclear EMP is likely to cause catastrophic damage to electronics in vast regions across thousands of kilometres, and may often affect even the state using the weapon. Besides, the first use of nuclear weapons carries the escalatory risk of retaliatory nuclear strikes.

Andrei Sakharov, the Soviet nuclear scientist conceived of the concept of generating a non-nuclear EMP (NNEMP) as early as 1951. Although work on NNEMP started subsequently, it was only in the 1990s that documents and information began to appear in public about these weapons. Though information on these weapons is mostly kept classified, non-nuclear EMP weapons are now a part of military arsenals of at least major powers such as the US and the UK.4

Classified as Directed Energy Weapons,5 NNEMP weapons generate a less powerful EMP and have radii of effectiveness ranging from a few hundred meters to a few kilometres.6 Military NNEMP weapons are probably in existence in the form of either aircraft or missile delivered e-bombs7or mounted systems on aircraft, drones or missiles. Boeing claims to have successfully tested an EMP missile — Counter-electronics High-powered Microwave Advanced Missile Project (CHAMP) —at the Utah Test and Training Range in 2012.8 Small suitcase-sized ground-based NNEMP weapons with short ranges are also feasible.9 The adverse impact of a NNEMP attack is envisaged to be more on systems and devices with electronic components, as the voltages required to damage semi-conductors are small.

Experts consider that NNEMP are easy to develop and relatively inexpensive and that these could also be put together using Commercial-Off-The-Shelf (COTS) materials.10 Avi Schnurr, CEO and President of the Electric Infrastructure Security (EIS) Council of the United Kingdom (UK), has statedthat ‘the biggest issue with non-nuclear EMP weapons is that the complexity and threshold required to produce them is minimal, to say the most.’11 Given the relative ease of development, not only major powers but even smaller countries could develop them.

On March 25, 2003, CBS NEWS reported the first possible use of an e-bomb by noting that ‘The U.S. Air Force has hit Iraqi TV with an experimental electro-magnetic pulse device called the “E-Bomb” in an attempt to knock it off the air and shut down Saddam Hussein’s propaganda machine….’12Even at their current levels of technological capabilities, there is a possibility that India’s neighbours already possess aircraft or missile delivered e-bombs. Short range briefcase-sized EMP devices could even get into the hands of non-state actors and terrorists, in all likelihood made out of COTS materials.13

EMP weapons could be used against military and civil targets alike. They have been called Day-1 weapons by some experts, as these are likely to be used as early as possible in war to maximize asymmetry over the adversary. Modern militaries are heavily reliant on advanced electronics. Even at the lowest levels, weapons, equipment, communication and data sets, among others, have some embedded electronics. At higher levels, naval ships, aircraft, artillery pieces, armoured vehicles, radars, military communication and data network, command and control centres, automated air defence (AD) weapon systems, etc., have substantial and critical electronic components.

Majority of the present day military equipment and networks are either insufficiently or not at all hardened against EMP. Therefore, at every level, militaries are vulnerable to EMP attacks. An e-bomb with a lethal radius of even a few kilometres could put out of action a deployed battalion-size force or a large number of airfield assets or a naval flotilla. The damage to the electronics will take considerable time to repair and the downtime of the affected combat systems may extend from a few hours to even months. Unserviceable combat systems and the absence of command and information systems are likely to result in prevalence of disorder and uncertainty, giving the offensive side a considerable advantage to wrest initial gains and turn the situation in its favour.

On their part, defending forces can foil enemy offensives by disrupting the latter’s control and coordination through the use of e-bombs. Given the rather limited radius of effectiveness of e-bombs, a large number of e-bombs would however be needed to cover the length and breadth of enemy forces in battle zones, including vital targets like war rooms, operation -centres, force headquarters, airfields, AD systems, etc. E-bombs could prove to be more effective than explosive bombs since they would not spare even the dugout or blast protected targets. A single wave EMP attack could considerably reduce the combat capability of a force. Even localised damage could have the potential to disrupt activity, especially if combined with other forms of attack.14 To ensure optimal use of own EMP weapons and deny a counter EMP strike opportunity to the enemy, militaries would need to devise tactics and strategies.

Besides military targets, a number of strategic civilian targets, like urban data and communication centres, stock exchanges, factories and other centres of gravity could also be attacked by e-bombs.15 Targets hardened against physical destruction or located amidst the civil population could be particularly vulnerable to e-bombs. With increasing networking and redundancies, however, data and communication facilities are becoming resilient against total annihilation.

EMP weapons could also be used clandestinely to take out important targets during peace time, when the use of conventional weapons would be considered outrageous, as it will be difficult to prove who exactly was responsible. Such incapacitating applications of EMP could also prove to be an effective deterrent against enemies contemplating military action.

Since information on e-bombs is kept highly secret, experts are unable to definitively gauge the extent of damage it may cause.16 Damage would depend a lot on the target characteristics also, for instance whether the electronics of the target are enclosed in metal, the percentage of electronic components in the target, exposure of metal cables, connection to power supply, terrain masking, etc. Likely damage could, however, be arrived at by conducting simulation and field testing.

The collateral damage potential of e-bombs, i.e. damage to electronics in hospitals, emergency services, etc., may make their use sinister and would need careful contemplation.

Faraday’s caging and metal encasing of systems and components is considered to be the most effective protection against EMP, besides physically destroying the weapon delivery platform itself.17 These are designed to divert and soak up the EMP. Additionally, electrical surge protection circuits and terrain masking could be useful. However, the costs of building EMP protected military systems or EMP hardening of all current systems is considered prohibitive by experts. It may be possible for only a few critical systems. At present, no infallible solution seems to be available against NNEMP.

The EMP threat has been a rising concern for all major powers, which have constituted high-level commissions and committees in the recent past to study the threat. Think tanks have also been engaged in discussing the issue. Deposing before the Defence committee in November 2011, the UK’s then Minister of State for the Armed Forces, Nick Harvey, stated that EMP ‘is certainly considered a potential threat. It is not considered a particularly likely one, certainly in the foreseeable future; but we keep that constantly under review.’18 The US also keeps the threat under vigil and has also possibly evolved contingency plans.19

India, with its hostile neighbourhood,20 should not discount facing an overt or clandestine use of NNEMP weapons during either peace or hostilities. Keeping a tab on their possible development in the neighbourhood may be prudent. For retaining combat capability in case of EMP attacks, building redundancies into important military structures and developing fibre-optic networking may be indispensable. Measures like cost-effective Faraday caging and shielding for frontline equipment may be studied.

According to a 2015 news report, India too had started work on EMP in 1985. The report stated:

‘According to publicly available information, KALI (Kilo Ampere Linear Injector) is a linear electron accelerator being developed in India, by Defence Research Development Organisation (DRDO) and Bhabha Atomic Research Centre (BARC). It is designed to work in such a way that if a missile is launched in India’s direction, it will quickly emit powerful pulses of Relativistic Electrons Beams (REB). It damages the on-board electronic systems.’21

Looking at the gross asymmetrical advantage it provides against adversaries, India should actively consider developing an offensive NNEMP capability.

Major Western powers have confirmed the existence of NNEMP weapons. However, their effectiveness and likely success rate remains intangible since information on these matters remains classified. With the ease of development and low costs, these weapons are likely to proliferate and should be factored into war contingencies. India is vulnerable to EMP attacks, given the presence of technologically capable neighbouring rivals and adversaries. India should conduct a formal evaluation of the regional EMP threat and work towards building EMP resilient data and communication structures, both for civil and military requirements. There may also be a need to devise contingency plans and procedures for EMP attacks. Looking at the advantages and practical employability of e-bombs, India should also provide impetus to developing and inducting an offensive NNEMP capability.

16.Ibid, pp. EV-19, Q-11. The UK MoD stated: “In terms of classification, there is quite a bit of material on the internet. We routinely monitor that and assess it. Some of the devices are potentially viable; some are not. Most of them are rather short-range; for instance, with modified microwave sources, you are talking about ranges in the category of hundreds of metres. We keep an eye on those threats. Is it classified? There are some classified areas. We do not want to share our view on what viable devices might be at the high end of non-nuclear EMP, so we protect that very sensitive area because we do not wish to see further proliferation of those competent devices.”

19.Report of the Commission to Assess the Threat to the United States from Electromagnetic Pulse (EMP) Attack, Volume 1: Executive Report 2004, https:// www.globalsecurity.org/wmd/library/congress/2004_r/ 04-07-22emp.pdf