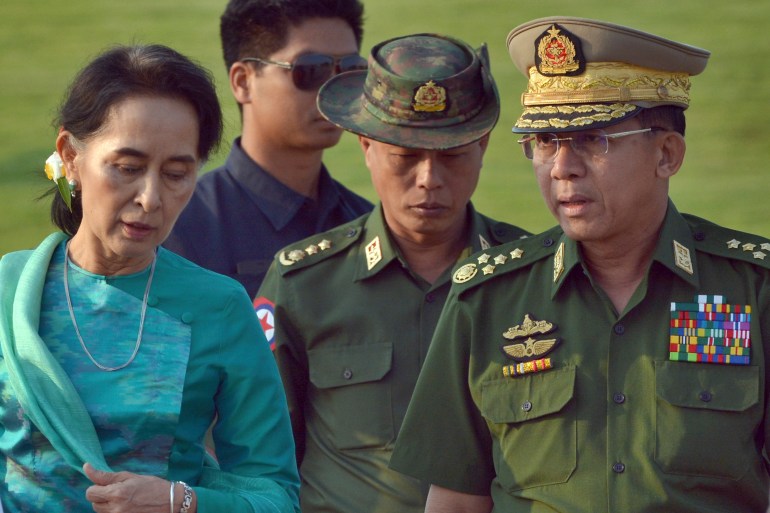 The Myanmar military has declared emergency and placed Aung San Suu Kyi and several National League for Democracy (NLD) leaders under house arrest on January 31. Speculation over the possibility of a military coup was ripe past three days in light of the opening of Myanmar’s newly elected Lower House of Parliament scheduled on February 1.

The military had demanded certification that the general elections held in November 2020 were free and fair. According to the military, the general elections were full of irregularities and therefore invalid. A military spokesman said that the army had found 8.6 million irregularities in 314 areas across all states and regions, and that this indicated the possibility that people had voted more than once, or had engaged in some other voting malpractice. The pro-military Union Solidarity and Development Party (USDP) which won only 33 seats also called the election results unfair. However, the United Elections Commission (UEC) has said it found no evidence of any voting malpractice or fraud. The NLD led by Aung San Suu Kyi, had won a landslide victory in the general election capturing 396 seats.

Media has also reported that Myanmar’s Commander-in-Chief Senior General Min Aung Hlaing told officers at the National Defense College via video conference that: the 2008 Constitution is effective with each section has a purpose and meaning – no one should take it upon themselves to interpret it as they please; the military needs to abide by the Constitution which is the mother of the law; applying the law based on one’s own ideas may cause harm rather than being effective, and; all existing laws will be respected that are not beyond the 2008 Constitution but if one does not follow the law, such a law must be revoked. He also spoke about how the military had revoked two previous constitutions in Myanmar.

Following the above development, multiple diplomatic missions in Myanmar including Australia; Canada; EU, UK, the US, Norway and New Zealand issued a statement saying, “We affirm our support for Myanmar’s democratic transition and efforts to promote peace, human rights, and development in the country. We look forward to the peaceful convening of the Parliament on February 1 and the election of the President and speakers… we congratulate the people of Myanmar on their historic participation in the country’s recent general election. We urge the military, and all other parties in the country, to adhere to democratic norms, and we oppose any attempt to alter the outcome of the elections or impede Myanmar’s democratic transition…”. China and India were not signatories to this statement.

Declaration of emergency is obviously the military’s bid to retain its influence over the politics and governance of Myanmar. There would also be the fear that with the landslide win, Suu Kyi would move to amend the 2008 Constitution, which NLD has abhorred ever since. Such an amendment would aim to reduce the 25 percent representation of the military in both houses of Parliament. The military would not like that to happen at any cost.

But that is not all. The military may not like the manner in which NLD-led Myanmar has acquiesced to China despite Beijing actively supporting and arming terrorists and insurgents in Myanmar, which enables China to exert indirect but effective pressure on the Myanmar government. It may be recalled that the army chief had mentioned this in the recent past albeit he only referred to a foreign power, without naming China specifically.

The army is obviously also not comfortable with the NLD government agreeing to take back from Bangladesh the Rohingya Muslim refugees in phases after a Chinese-mediated dialogue in backdrop of the violent clashes in Myanmar during 2017. While the Myanmar army was accused of attacking Rohingya’s causing exodus of Rohingya refugees, the Arakan Salvation Rohingya Army (ARSA), which is backed both by Pakistan and China, attacked a number of Myanmar army posts. It is also on record that China has been offering money to Rohingya refugees in Bangladesh to return to Myanmar, with the aim of using them in Kachin state in the manner Beijing wants. Nearly 40,000 Rohingyas are expected to return to Myanmar in the first phase.

More importantly, the Myanmar army may not favourably view NLD’s submission to China for the China-Myanmar-Economic Corridor (CMEC), which is an invitation for the People’s Liberation Army (PLA) to establish in Myanmar like Pakistan including Chinese marines posted at Kyaukphyu port like in Gwadar of Pakistan. That is what China’s Communist Party wants and perhaps perceived by the Myanmar army. The question is does the NLD not see this threat beyond the charm of economic progress through the CMEC despite the rut in Pakistan with the CPEC?  All these could be the reasons behind Myanmar army declaring emergency and arresting NLD leaders. Any trouble in Myanmar is not good for India but siding with either the military or the polity in Myanmar would be unwise, especially since China wants to draw Myanmar more into its strategic sphere.