Eastern Turkistan: Struggle for a nation-state 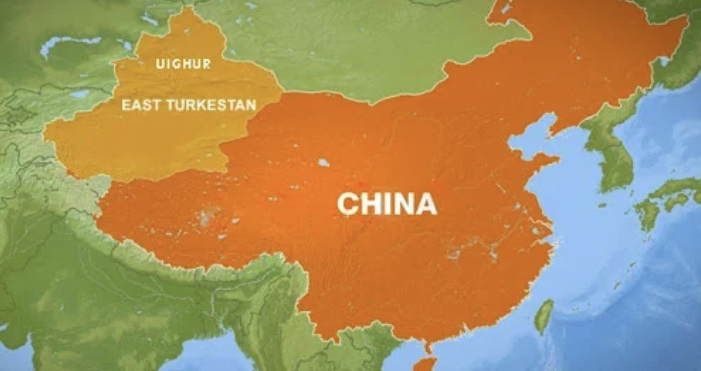 The Arab and Persian historians of medieval times have written very little about the Uyghurs of Eastern Turkistan, their history, culture and life.  They generally included them in the broader Turkic people of the Central Asian region and rightly so, essentially because of their Turko-Mongoloid descent. But they have been treated rather a lesser momentous populace in comparison to the main body of that race in the heartland of the Central Asian Steppes. Much less was told about their tribes and satrapies and their exploits in the neighbouring areas thoughculturally they remained glued to the vast Turko-Mongoloid milieu. It was the western historians and specialists like Barthold who dug deep into their past and present and presented their profile which has now become a dependable source for knowing the Uyghur and other Asiatic settlers in the region.

Muslim historians gave it the name of Turkistan which means the land of the Turks. Though the people in this vast region spoke different languages and dialects, yet racially they mostly descended from the Turko-Mongoloid stock except those living in the northern slopes of Badakhshan Mountains – the watershed that divides the Turko-Mongoloid homeland from the Aryan settlements across the Badakhshan, Pamir and Hindukush. Nevertheless, Turkistan has remained integral to the writings of the historians and litterateurs of the Iranian and Arab stream. The Arab and Iranian historians called the region Turkistan meaning the land of the Turks. But the Russian historians used the term East Turkistan.

The region remained under the sway of the Chinese Emperors for a long time. There were sporadic opposition to or uprising against the Chinese suzerainty. In present-day terminology, these could be termed as secessionist movements and local rebellions undertaken not only by the Uyghur but also by other nationalities like the Tajiks, Uzbeks and Kazakhs settled inEastern Turkistan as merchants but not as missionaries to propagate one or the other sect. These defiant political groups bore affinity more to the indigenous Turkistanis than to the Hans the predominating ethnic group of China that had been in power for long.

After the fall of China’s Qing dynasty in 1912, local separatists continued to fight for an independent state. In 1933, the Uyghurs managed to establish an East Turkestan Republic (ETR) but were defeated by China’s Kuomintang forces.

After the establishment of the People’s Republic of China in 1949, communist leader Mao Zedong designated the region (now given the new name of Xinjiang) as the “Uyghur Autonomous Region” as a bargain for separatists to surrender. Since then, the ruling Communist Party of China (CPC) has tried to suppress any feelings of “national liberation” and link such acts to “foreign hostile forces”.

After the implosion of the Soviet State in 1991 resulting in the declaration of independence by 5+2 Central Asian and the Trans-Caspian States, the ethnic-nationalist elements in the Eastern Turkistan (Xinjiang) became pro-active in demanding secession from China and raising of an independent State of Eastern Turkistan in the footsteps of its earlier avatar.

The US has almost completed its troop withdrawal from Afghanistan in the wake of the Doha agreement. Only a few days ago,  the US forces abandoned the crucial Bagram airbase thus creating a vacuum for the advancing Taliban forces and cutting the lifeline of Afghan communication with the world outside. It seems very difficult for Kabul to prevent the Taliban from capturing the airbase of Bagram and thus strengthen their position for a final assault on the capital from where vulnerable people have already begun to move out for safety.

The international community is much concerned about the new situation developing in Afghanistan and is seriously visualising the consequences of the Taliban takeover of Kabul. China is no less concerned but in a different way. One cannot rule out the possibility of Al-Qaeda and the Daesh (Islamic State) jumpingin to fill the vacuum left by the retreating Americans.  China views the deteriorating situation as a catalyst to strengthen the East Turkestan Islamic Movement (ETIM), an Uyghur separatist organization, fearing security implications of a Taliban regime.

The Asia Times reported that the ETIM may have increased its logistical and financial resources, manpower, and weaponry since the removal of the terrorist tag by Washington in 2020.

A recent UNSC report confirms the presence of more than 500 ETIM fighters in different parts of northern Afghanistan, including Badakhshan, Kunduz, and Takhar provinces that connect China’s Xinjiang province via a narrow Wakhan Corridor. China also fears the possibility of other jihadist organizations supporting ETIM’s “Uyghur -cause” to carry forward their “Islamic” agenda. In 2017, the Islamic State released a video of Chinese Uighur Muslims threatening to return home and “shed blood like rivers”, as reported by Asia Times.

At present, an East Turkestan government-in-exile is based out of Washington, formed under the leadership of Anwar Yusuf Turani in 2001.

July 7th marked the 12th anniversary of the violent Xinjiang riots that had left more than 190 people dead and several others injured in the capital city of Urumqi. This event put the international spotlight on the semi-autonomous region as the western media and experts termed it “ethnic unrest” and displeasure among the minority 12 million Uyghurs.  However, China calls the event an “act of terror” that put into motion a series of draconian measures to curb the spread of extremism in the region and detained over 1.5 million Uyghurs.

Several instances of violence have occurred which the Chinese authorities call terrorist activities necessitating action to curb them. China has suppressed the region with excessive policing, surveillance, and restrictions on the pretext of “counterterrorism” and “deterrence”. Incidents of violence have also multiplied, which the Chinese blame on Uighur extremists belonging to the ETIM.

Last month, Indian-origin journalist Megha Rajagopalan was awarded the Pulitzer Prize in the ‘International Reporting’ category for exposing the secret of detention camps of Xinjiang, which Beijing has been categorically refuting. It calls them “vocational institutes” to de-radicalize the members of the minority community and sustain peace in the province, a claim which no news agency has endorsed.

China has been stubbornly contradicting and attacking the organizations exposing her in the case of large scale Uighur distension.   For instance, it repeatedly attacks Munich-based World Uyghur Congress (WUC), an international organization formed by exiled Uyghur groups that aspire to “represent the collective interest of the Uyghur people both inside and outside of the Xinjiang, over anti-China propaganda and spread of “false information” such as forced sterilization, lack of religious freedom and destruction of Uyghur heritage,” reports Asian Times.

The Uyghur are forcefully carrying forward their great struggle for recognition of their land not as an autonomous region of China but as an independent state recalling to mind its status before the occupation by Communist China and large scale effort of changing the demographic complexion of the region. The world is listening to their voice more intently today than ever before.