03 March, 2021
Home  >  Spotlights  > Geopolitics  >  Disambiguation of OBOR in Sino-Indian Relations: Is It a Strategic Checkmate – Part-3

Disambiguation of OBOR in Sino-Indian Relations: Is It a Strategic Checkmate – Part-3 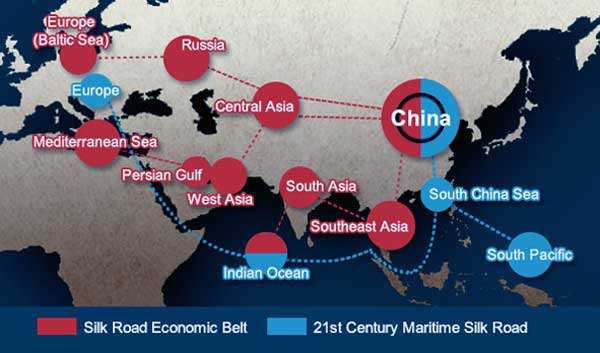 OBOR includes a land-sea component (Silk Road Economic Belt (Land) and 21st Century Maritime Silk Road [Sea]). The following sections elaborates why it’s the sea, and not the land component of OBOR which may or may not produce negative strategic consequences for India. If OBOR where to produce negative strategic consequences for India at sea, then India is not alone in responding to such challenges. Major powers such as Japan, United States, Australia, France and Britain will step (already have) in to reverse any adverse gains made by China in the Indo-Pacific. Such a strategic posture has already begun to take shape, and India has had a pivotal role in shaping such a strategic discourse in both capability and geographical terms.

Naval power provides the security for the nations conduct from and at sea – commerce and navigation[1]. Security of Indo-Pacific through which the 21st Century Maritime Silk Road passes is essentially a strategic narrative of application of naval power in the Indo-Pacific from a global perspective. The following analysis attempts to understand this phenomenon from a military-historical perspective built around the global context of India’s naval power in the 20th century and its defence relation with major powers such as Japan and United States in the 21st century. The prime hypothesis being – India’s traditional role in the security of Indo-Pacific has continued in a recognizable pattern if observed within a global strategic context and its strategic role is shaped by both endogenous and exogenous variables. For China’s OBOR, India’s strategic appraisal of 21st century Maritime Silk Road and its security will require it to factor in the overall health of Sino-Indian relations.

The idea of a New World Order (NWO)[2] primarily resides at Indo-Pacific with majority of global “commerce” and “navigation”[3] traffic relocating to Indian Ocean Region. It first came into the global strategic calculus at the turn of the last century with the discovery of oil in the Persian Gulf[4]. Following theIslamic revolution in Iran and Soviet invasion of Afghanistan the Persian Gulf witnessed an influx in militarization of Indian Ocean. In January, 1980 President Jimmy Carter articulated the US foreign policy as “…. any attempt by an outside force to gain control of the Persian Gulf region will be regarded as an assault on the vital interests of the United States of America….and such an assault will be repelled by any means necessary, including military force”[5]. However, the presence of extra-regional power shaping events in Indo-Pacific has prior historical precedence where the present foundations of the New World Order are enshrined.

Since the gradual relocation of economic and military power at sea, control and domination of sea lanes of communication has been the prime concern for anyone attempting to be a global power (hegemon). The 20th century hegemon (Britain), and 21st century hegemon (United States) are primarily maritime powers who have matured capability at projecting military power from sea to shape events at land and sea. This stands in variance to the approach adopted by continental powers who predominantly employ land to shape events at sea. Both Russia and China are predominantly continental powers constrained by their geography and strategic culture. A maritime power believes in controlling the sea (sea-control) where as a continental power attempts to deny such a sea control to others. This is evident in Russia and China’s behaviour in Black Sea and South China Sea respectively. Given this backdrop, OBOR as this analysis argues is China’s continental solution to a maritime problem. Constrained by its philosophy of peaceful rise/development China intends to achieve the following strategic objectives through the successful implementation of OBOR;

Sea and its strategic understanding thus remains central to decoding the Chinese initiative of OBOR. The idea of OBOR has come about the same time of the articulation of the concept Indo-Pacific by Japan and India. Furthermore, western powers have begun strategic rethink on maintaining their supremacy in shaping and maintaining the present world order within a maritime framework.

The Idea of Indo-Pacific

“Indo-Pacific” as a geo-strategic resonance, has found acceptance with multiple nations since it was first officially articulated by Japanese leadership on their visit to the Indian Parliament (2007)[6]. In a speech titled “Confluence’s of Two Seas” the then Prime Minister of Japan articulated the importance of the Indian Ocean and Pacific Ocean for Japan’s national security in terms of the geographical “strategic vulnerability”. The idea was perhaps the outcome of strategic dialogues between Indian and Japanese officials, military leaders, and scholars preceding its official articulation that year[7]. According to Japan’s Défense Ministry, China too has similar geographical strategic vulnerability associated with the concept of Indo-Pacific[8].The term Indo-Pacific in geographical term resembles the operational area of United States Pacific Command (USPACOM) and includes Pacific and Indian Ocean as a combined theatre of naval operation[9]. However, Indo-Pacific as a strategic concept is more potent in being operational as strategic reasoning from a global perspective rather than as a limited geographical imagination. As a strategic concept, it has been invoked by leaders, diplomats and scholars alike to decode their understanding and explanation of security architecture that includes both the Indian Ocean and the Pacific Ocean.

The concept of “Indo-Pacific” further stands extended to interpret the developments in the field of defense relations and diplomacy amongst major powers that subscribe to this analytical framework of “Indo-Pacific” other than India and Japan such as Australia, United States, Indonesia, Singapore, Vietnam, Sri Lanka, UAE and China. While it is the geographical vulnerability that concerns Japan and China, for others varying causes and reasons produce the dynamics that shape their foreign and military policy choices with respect to Indo-Pacific. For example, for the US it is the Freedom of Navigation (FoN) and perseverance of “global” neo-liberal economic (trading) system which necessitates uninterrupted access to global common such as the high seas, for Japan it is its survival as an island nation that’s dependent on external trade, and for China like Russia it is the battle for access to high seas[10]. In this regard, it is worth to recollect that Soviet Union’s foothold in Afghanistan (1979) was met with US covert resistance to discourage a Soviet access to warm deep-water port in Indian Ocean via land (Pakistan). Interpretation of China-Pakistan Economic Corridor (CPEC – April 2015) falls along the same line of strategic reasoning albeit different strategic context where China’s flag-ship project (CPEC) under the new “One Belt One Road” initiative optimizes the deep-water port at Gwadar, Pakistan (Arabian Sea – Indian Ocean). The recent US-Japan defense relations and U.S. and Japan’s defense relations with India also confirm to the same strategic reasoning as this analysis sets out to clarify.

Application of naval power from a global perspective challenges any maritime power from simultaneous capability to project power in Indian Ocean and the Pacific via sea. It requires;

An enhanced focus on Middle East by US Navy calls for a reconsidered policy of “pivot to Asia” as it depletes its ability to project power in western Pacific. This strategic problem is less about the actors and their respective behaviours, but sea as a predominant factor from where power is to be projected.Inability to achieve sea control under modern war conditions has led some to profess the decline of US hegemony in the 21st century[11].While sea power is likely to remain bedrock for the conduct of international relations, undergoing transformation (control and domination) over space will determine the conduct of international affairs during the latter part of 21st century[12].