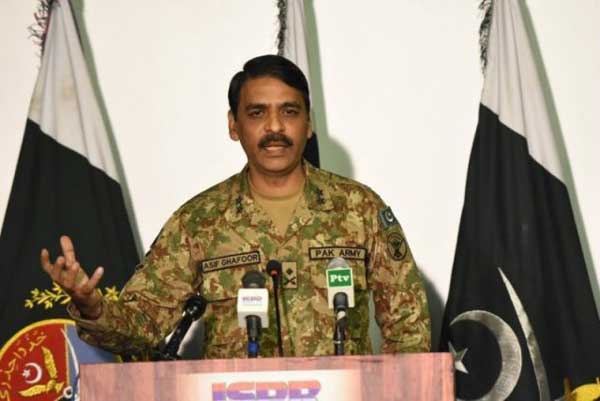 Though mandated to deal with military matters, Pakistan army’s media wing Inter Services Public Relations (ISPR) is notorious for its proclivity to transgress into the realm of politics and diplomacy, leading to severe embarrassment. Therefore, Director Gen (DG) ISPR Maj Gen Asif Ghafoor’s puerile tweet conveying Christmas wishes to “Christians in Pakistan, across the globe and especially to the ones in the states of Odisha and alike under the Hindutva obsessed environment” comes as no big surprise- although its timing certainly does!

Isn’t it ironical (and equally amusing) that the DGISPR’s sarcastic tweet comes just on the heels of Pakistan being re-designated as a ‘Country of Particular Concern’ (CPC) by the US State Department for being guilty of “particularly severe violations of religious freedom,” implying official tolerance towards “systematic, ongoing, egregious violations of religious freedom”? Or could it be that this knee-jerk reaction is mere manifestation of the frustration arising out Pakistan continued inclusion in the CPC list? Whatever be the reason, but if Maj Gen Ghafoor had thought that his tweet would find favour with the Christian community and arouse anti-government sentiments amongst them, then he was terribly mistaken.

Christians the world over (including India) have not quite appreciated the idea their faith being used as ‘ammunition’ by Pakistan for its ongoing war of words with India. Furthermore, the DGISPR’s tweet rekindles bitter memories of how Christians are repeatedly being targeted in Pakistan and the case of Asia Bibi, who was terrorised and wrongly confined for eight long years on trumped up charges of blasphemy automatically comes to mind. Indian MP Sasmit Patra, (who himself is a Christian) hit back at Maj Gen Ghafoor with a strongly worded tweet that read, “Please hear a young Christian MP (Patra himself) from Odisha (since you referred to Odisha), slamming Pakistan’s anti-minority barbarism before 170 countries this year at 141 Inter-Parliamentary Union (IPU), Belgrade.”

Patra also tagged video footage of his 141 IPU speech in which he can be heard saying that “It is shameful and derogatory, condemnable the kind of action Pakistan has been taking over the years. The minorities in Pakistan are fleeing Pakistan because Pakistan is perpetrating crimes on them. Can Pakistan confirm that it is home to 130 UN-designated terrorists and 25 terrorist entities listed in UN? Is this the agenda of Pakistan?” India’s Minister of Petroleum & Natural Gas and Minister of Steel, Dharmendra Pradhan from Odisha too hit back at DGISPR by tweeting “So says a man sitting at the epicentre of genocide against religious and ideological minorities.”

But in a way Maj Gen Ghafoor’s uncharitable Christmas tweet has done India good because it has fully exposed Pakistan’s grievous intent of vitiating the secular environment here. Minorities need to understand that the great concern that Pakistan is displaying is solely to instigate them to indulge in violence and this, as we all know, they have done earlier in Punjab and J&K. Whereas the people of Punjab saw through the Pakistan army’s game-plan and rejected militancy before it was too late, the people of Kashmir haven’t been as lucky since they have amongst their ranks, those, who being recipients of Islamabad’s largesse are using the deadly combination of religion and strong-arm tactics to ensure that normalcy doesn’t return to the Valley!

The DGISPR’s tweet has also brought focus back on the way Pakistan is treating its minorities and one is reminded of how he had sounded more like a novice politician rather than a mature military officer when in an obvious mention to Pashtun Tahafuz Movement (PTM) he said, “Their time is up” The PTM is neither a terrorist or fundamentalist organisation. On the contrary, it’s a Khyber Pakhtunkhwa (KP) and Balochistan based social movement for Pashtun human rights that was originally created by students for pressing the authorities to remove landmines laid by Pakistan army in the former Federally Administered Tribal Areas. Shaken by continuing incidents of rampant extrajudicial executions and enforced disappearances, PTM added the demand for a truth and reconciliation commission on extrajudicial killings and presenting missing persons before courts.

The very mention of enforced disappearances and extrajudicial killings in KP-Balochistan regions upsets the Pakistan army and this is but natural because of its humungous magnitude. Infact, during the same press conference in which he warned PTM that “their time was up,” the DGISPR himself conceded that “The list (of missing persons) has shortened to 2,500 cases today and the (missing persons) commission is working day and night to resolve those cases.” Whereas for Maj Gen Ghafoor it may be a matter of great pride that the list of missing persons had been “shortened to 2,500,” but this monstrous figure would certainly shock any God-fearing mortal.

The Pakistan army is in full control of the KP- Balochistan regions and therefore such a large number of persons going missing isn’t possible without the army being either involved or atleast aware of these disappearances! Though Rawalpindi has always denied it, but Maj Gen Ghafoor’s own statements made with reference to the PTM belie Rawalpindi’s claim. Examples:

Tailpiece- By originating a tweet on Christmas that has reminded the world of the skeletons stuffed in Pakistan’s own cupboard, Maj Gen Ghafoor has once again completely ‘goofed’ it up. Let’s now wait and see what’s he’s going to entertain us with on New Year day!