Developing Stealth Technology: Lessons from the US XST/F117 Programme 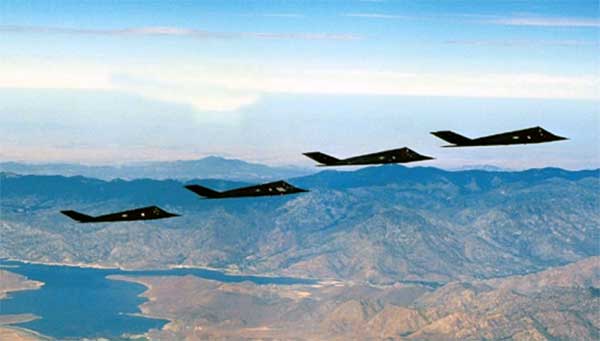 The following expansion of some of the rules showed the result-oriented approach.

The profile of Dick Scherrer, the team leader who was 54 years old when he took charge of the project is typical of the people involved. He was a BS in Engineering and from 1942 to 1959 (he was at NASA Ames Wind Tunnel and had much practical experience in Tunnel testing). From 1955 to 1959, he was also working on the side on the Disney land “rides” such as “Dumbo The Flying Elephant”. In 1959, he moved to Lockheed California making project studies for about five or six important programmes including winning Lockheed submissions such as the P3 Orion, The S2 Viking and the Tristar. Though by our rules, he would be “low” on formal qualifications the emphasis on hands-on experience is to be noted. The degree of “hands on” experience can be gauged by the fact that when the Lockheed shop floor workers went on strike during the assembly of the prototype, the engineers were confident enough to do it themselves.

Analysing the Management of the Programme

Rene Descartes (1596-1650 AD) had observed, “If you begin with certainties, you will end up in doubts but if you are content to begin with doubts, you will end up in certainties”. The Americans were unconsciously following Descartes. Their starting point was not an aim or an identified technology, but a search for the technology – at that point unidentified – that would enable the USAF to survive and dominate hostile airspace. Having identified stealth as a possible solution, they then tried to establish a minimum level of stealth required to survive. The technological difficulties were respected as only engineers and practical men can and no impossible goals were set.

Recognising that “stealth” would have an adverse effect performance they focused on getting to know the stealth technology. The XSF was a pure technology demonstrator with no combat capability and even the final F-117 was decidedly sub-sonic and of limited war load capability.

The Americans at the start, focused on just two common sense questions:

In spite of their enviable depth of experience or perhaps precisely because of it, the Americans lost no time in backing each theoretical projection with hard data no matter how “crude” the data was at that point in time.

The Americans, again because of their depth of experience, avoided making the mistake of developing the combat F-117 in one go. The Table 1 shows how different the XST was from the F-117. Translated to an Indian context, it would mean that the LCA TD 1 should not have been KH 001, the LCA prototype, but an HF 24 or even an HJT 16 or MiG 21 but having the four technologies – composites, FBW, BVR and the glass cockpit needed in the LCA programme. The resulting compression of “to flight” times and the refinement that the hard data would have brought to the LCA programme, can be imagined.

In the case of the AMCA, it would mean a subsonic aircraft using aggregates from concurrent programmes, but incorporating all that we have learnt so far on stealth airframes so that all our detail design is based on proven technology and not on hypothesis and validated before we proceed to the infinitely more difficult job of designing a supersonic stealth aircraft. It is the problems that we cannot know theoretically that need to be unearthed at the earliest.

No amount of computer studies can solve problems that one cannot foresee and can only be seen in flight. 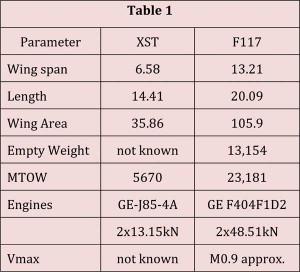 The difference between the tech demonstrator and the final product is obvious. All dimensions are in metres, square metres and kilogrammes

The very short lives of the two XST prototypes – 52 and 36 sorties respectively show the emphasis that has to be placed on generating data to validate the theoretical projections. The prototypes were there to generate data and they were hard driven. It may be mentioned that the equally skilled Russians had ten crashes in their SU 24 programme – four apparently due to airframe related problems and six due to engine related problems. Crashes are an occupational hazard in developmental flying and there is no merit in a crash-free programme. The risk taking informal approach can be seen by the fact that the F-117 prototype was test flown after just four taxi tests.

The first step should be a stealth technology demonstrator an AMCA-ST a subsonic stealth aircraft which will feature everything that we think we have learnt about stealth aircraft.

The Americans achieved remarkable fiscal and time control by slicing up the development into salami slices. At no point was the development target beyond the time horizon. Since DARPA officials stay on the job for about two years before moving out, most of the horizons were in months and we in India, can do so too.

Whilst the differences between the American and our way of doing things is obvious, the Americans were not doing anything that is impossible to do in India – save the way we think. The HJT 36 and the HTT 40 programmes underline that we can put up a prototype in 36 months and these figures can improve. The only correction will be to slice up a project, no matter how complex, into a one, two, or maximum three years slices. Any project with a target ten years away will, to use a current phrase, go BVR. No one, the “funder” and the “fundee”, will be around to answer or pick up the pieces when the time to call to account comes ten years hence! This is the fundamental weakness in our management.

Lessons for the AMCA Programme

Given the above, the AMCA programme should be reviewed thus:

•  Stealth technology is important enough for India to work on this field. The caution is that advances in RAM may radically change the way stealth aircraft are designed. Thus, timeliness of completion is of even more importance than is usual.

•  At the proposal stage, it is essential to have more than one submission even if it means releasing Rs 1 to 2 crore each to various selected (private sector) vendors. Multiple competitors generate ideas which can all be included in the final winner. Multiple entries will also avoid “the only son” performance syndrome which solitary organisations have shown.

If the programme turns in encouraging results it should lead to a small subsonic nocturnal intruder – not a supersonic AMCA as a first aircraft.

•  Developing a stealth AMCA “in one go” over ten years as is being proposed is a bleak prospect.

•  The first step should be a stealth technology demonstrator an AMCA-ST a subsonic stealth aircraft which will feature everything that we think we have learnt about stealth aircraft. This, like the XST, will maximize use of aggregates – engines, systems and undercarriage from the existing programme so that the only major design load is the stealth technology airframe.

•  The target time to flight should be thirty months and about rupees three hundred crore. If the team cannot meet this target, it will also not be able to meet a ten year, ten thousand crore plan.

•  The AMCA XST should complete its flight tests – focusing mainly on stealth signatures and handling, in about a year.

•  If the programme turns in encouraging results it should lead to a small subsonic nocturnal intruder – not a supersonic AMCA as a first aircraft. A detection range of one tenth of the Canberra could be a possible target.

2 thoughts on “Developing Stealth Technology: Lessons from the US XST/F117 Programme”