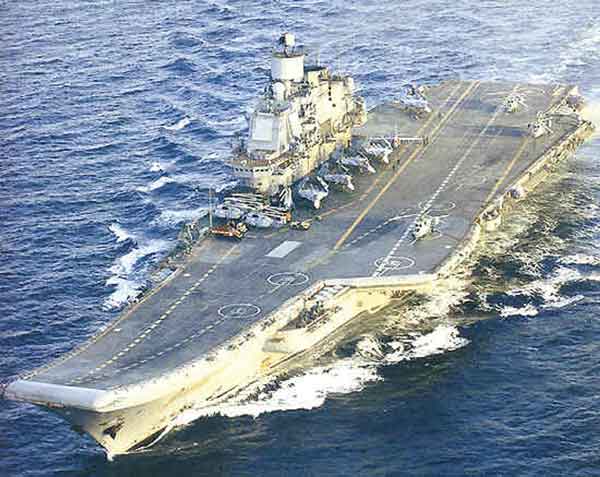 The global arms trade is a very tightly controlled business involving over 50 supplier nations, 120 willing buyer nations and an annual turnover of over $50 billion. Since Independence, India has made large investments in the Defence sector hoping that its needs will be met indigenously. India accounted for nine percent of all international arms imports between 2006 and 2010. China accounted for six percent. Despite many noteworthy achievements, much military technology still needs to be imported. It may be an opportune time to discover the salient factors that have enabled some countries to attain self-sufficiency and leadership in arms supplies. Although each service has distinct requirements, references will be particularized to the Navy. It should however be noted that the considerations governing self sufficiency are generic and would be equally applicable to the other services and can extend to space technology.

India accounted for nine percent of all international arms imports between 2006 and 2010. China accounted for six percent. Despite many noteworthy achievements, much military technology still needs to be imported.

Since antiquity, nations have strived to achieve military supremacy over or at least attain parity in arms with their neighbours or competitors. A time schedule by which that goal must be obtained is an important factor. It cannot be left open ended if attaining leadership is a genuine objective. To determine an average time period by which it is feasible to attain that supremacy, it is necessary to review the history and accomplishments of some of the major players. Many countries have admittedly achieved such status in the distant past. However, this analysis will be limited to the post Second Industrial Period from 1850 onwards and will only refer to their most recent cycle of leadership. Any headship prior to that date, will not be included herein.

In February 1946, the Red Fleet was renamed the Soviet Military Naval Fleet. After World War-II, the Soviets concluded that they needed to compete with the West at all costs, and began a program to achieve parity. Funding for the infrastructure, research, training, design and construction was accorded the highest priority. The Soviet shipbuilding program kept shipyards busy constructing submarines based upon captured German designs. These were launched with great frequency during the immediate post-War years. Afterwards, through a combination of intense research and technology refined through very focussed military industrial intelligence, the Soviets gradually improved their submarine designs, though they initially lagged behind the NATO countries by a decade or so.

The Soviets were quick and innovative to equip their surface fleet with missiles of various sorts. Indeed, it became a feature of Soviet design to place large missiles onto relatively small, but fast missile craft while in the West, such an approach was not considered tactically feasible. The Soviet Navy also possessed several very large guided missile Cruisers like those of the Kirov and Slava classes. By the 1970s, Soviet submarine technology was, in some respects, more advanced than in the West, and several of their submarine designs were considered superior to their American rivals. Between 1968 to 1980, nuclear propelled vessels, helicopter carriers, submarines and aircraft carriers were successfully built using their own resources. Within a span of fifty years, the Russians showed it was feasible to attain a leadership role in warship technology including nuclear propulsion which included state-of-the-art metal, gas and liquid reactors. Figs. 1 to 3 show Russian Naval designs currently in service.

Japan embarked on its naval leadership program in 1913. It was the first Navy to use wireless telegraphy, the first to design and build the largest Battleships, the first to recognize the potential of the Carrier and the first to launch an air strike from the sea. By 1920, the Imperial Japanese Navy (IJN) was the world’s third largest navy and a leader in naval development. By this time, the import content for its biggest battle ship was less than twenty percent.

In the period between 1930 to World War II, the IJN began to structure itself specifically anticipating an encounter with the United States who was seen as her their rival. Before and during World War II, the IJN was faced with considerable challenges, probably more so than any other navy in the world. Japan, like Britain, was almost entirely dependent on foreign resources to supply its economy. To achieve Japan’s expansionist policies, the IJN had to secure and protect very distant sources of raw material (especially South-east Asian oil and raw materials), controlled by foreign countries (Britain, France, and the Netherlands). To achieve this goal, she built large displacement warships with long range capability.

Japan’s numerical and industrial inferiority led her to seek technical superiority, qualitative superiority and aggressive tactics to overwhelm the enemy a successful recipe in her previous conflicts. However, she utterly failed to take into account the fact that her opponents in the Pacific War did not face the political and geographical constraints of her previous wars, nor did she anticipate incurring and having to replenish the heavy losses.

The IJN started the Pacific War with ten aircraft carriers, the largest and most modern carrier fleet

Japanese designers correctly put particular emphasis on the aircraft carrier. The IJN started the Pacific War with ten aircraft carriers, the largest and most modern carrier fleet in the world at that time. There were seven American aircraft carriers at the beginning of hostilities, only three operating in the Pacific and eight British aircraft carriers, of which only one operated in the Indian Ocean. The IJN’s two Shkaku-class carriers were superior to any carrier in the world, until the wartime appearance of the American Essex-class. A large number of these Japanese carriers were of small size because of the limitations placed upon the Navy by the London and Washington Naval Conferences. In the underwater world they, were equally very active having been designed and built as the largest submarine at the time.

Following the Battle of Midway, in which four Japanese fleet carriers were sunk, the IJN suddenly found itself short of fleet carriers. Japanese designers once again sought to innovate. Commercial and military vessels were converted into escort carriers such as the Hiy. Another conversion project, Shinano, was based on an incomplete Yamato-class super battleship and became the largest-displacement carrier of World War II. 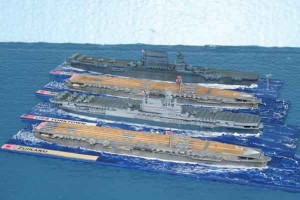 Japan began the War with a highly competent naval air force designed around some of the best airplanes in the world. The A6M Zero was considered the best carrier aircraft at the beginning of the war, the Mitsubishi G3M and G4M bomber were remarkable for their range and speed and the Kawanishi H&K was the world’s best flying boat. Even though it was eventually defeated, Japan proved it was possible to attain world class leadership in arms within a span of 50 years. Figs. 4 and 5 show the IJN Yamamo, the World Heaviest Battleship and a set of Japanese Carriers and their US counterparts at that time.

In the post-War period, France, Germany, Spain, Italy, Sweden and Israel amongst others have always maintained their world class design capability in certain well-defined niche sectors of the arms industry. They have been principally motivated by the pursuit of wealth which are the economic gains that come from that excellence. Each of these countries has been able to maintain a distinguishing design style and excel in particularized technologies. These countries have combined their Defence policy with other industrial, economic, and social programs in a systematic way to develop a broader strategic-industrial perspective.

France has been totally dependent on its own arms industry for many decades while steadily expanding its capability as an innovative arms supplier.

As an example, in the case of France, in addition to the DGA and the Ministry of Defense, the Ministries of Economics and Finance, Industry and Foreign Trade, and Transportation participate in various aspects of defense-industrial planning. France has been totally dependent on its own arms industry for many decades while steadily expanding its capability as an innovative arms supplier.

Though China has been a great land power and an active sea faring nation, she had stagnated during the Industrial Period. The People’s Republic of China (PRC) in 1949 quickly identified the need for a Modern Navy and entrusted that task to the People’s Land Army Navy (PLAN).

The PLAN has followed a three-step strategy in its modernisation process. Each step involved the development of a sea force that can defend a circle of increasing radius. In the first step, it aimed to develop a relatively modernised naval force that can operate within the first island chain, a series of islands that stretch from Japan in the north to Taiwan and Philippines in the south.

One thought on “Developing Leadership in Arms”