During the Kargil crisis Pakistan’s military moved to escalate the conflict with India without, apparently, informing the civilian leadership of the country. It is thus clear that Pakistan has political and constitutional problems, with the military over time having developed a comprehensive strategy for undermining civilian leadership and consolidating power once a coup takes place. The possibility of non-state actors to continue to act within Pakistan is a reality. Moreover, the danger of a loss of military control over militants in Pakistan remains a serious scenario.

The Emerging Pattern of Geopolitics

There is a global strategic environment, which presents many challenges in many different regions of the world that bear close attention in their own right. One is what is being called the Global War on Terrorism (GWOT), but it is really an assault against the West, Zionism and Hinduism by Islamist extremism, a virulent political ideology feeding on centuries of historical and cultural resentments. This ideological challenge is taking on a new geopolitical form.

In the traditional dimension of relations among the major powers, the re-emergence of Russia is one important feature of the current scene, but over the longer term the emergence of China represents probably a more dramatic change in the strategic landscape. It is the classical problem of a new great power appearing on the world stage, raising several complicated challenges of adjustment, for the world at large. The conflicts in Iraq and Afghanistan, as well as the insurgency in Kashmir have added their own dynamics to an already skewed geopolitical situation.

the Global War on Terrorism (GWOT), but it is really an assault against the West, Zionism and Hinduism by Islamist extremism, a virulent political ideology feeding on centuries of historical and cultural resentments.

Carl von Clausewitz was one of the first to distinguish between limited and unlimited, or absolute, wars. Clausewitz’s absolute war was a theoretical abstraction, a concept of complete and total conflict that did not actually exist. He used it to examine the nature of war’s limitations. War could be limited in several ways: by the level of political demands of the combatants, the situation or condition of the belligerents, the strength of will on both or all sides, the degree of force employed, and much more.5 From this flowed his famous dictum that war is a continuation of politics: it is the political and policy environment that sets the limitations to conflict, for example, by dictating what resources belligerents will be able to employ.

Terrorism is an opportunistic infection in the human social condition. It is a problem greater than the sum of its parts. It emerges whenever any society’s immune system is sufficiently weakened.  Complacency, cowardice and moral neglect are ever with us. Their darker companions – fevered minds with deadly weapons – will never be far away. Since we now live in an inter-connected world, terrorism cannot be seen in isolation against one particular nation or facet of civilization.

Insurgencies and extremist activity are the symptoms of political, economic, and psycho-social factors that undermine social stability and popular commitment to public order. Attached to the current war on terrorism is a very different sort of challenge: countering the rise of radical Islam. This radicalism is a product of popular reactions to incomplete and partially successful modernization, the inability of local governments to provide social goods, the perceived humiliation of Muslim peoples and interests globally, the relative socio-economic decline of parts of the Muslim world, amongst other factors. Such environments produce mind-sets filled with real and invented grievances, overwhelmed with the existential demands of modernity, and anxiety to revalidate a humiliated national or ethnic group by resuscitating ancient values.6 Such conflicts require the use of social, economic, political, informational, and psychological tools of statecraft.

The Dimensions of the Conflict

Mark Juergensmeyer, a leading authority on extremist thought, explained that a “war-against-terrorism strategy can be dangerous, in that it can play into a scenario that the religious terrorists themselves have fostered the image of a world at war between secular and religious forces. A belligerent secular enemy has often been just what religious activists have hoped for.”7 Since the state no longer has a monopoly on instruments of violence, recourse to violence is increasingly becoming a weapon of first resort. Terrorism can be contained and its effects minimized, but it cannot be eradicated, anymore than the world can eradicate crime. Resentments real or imagined, and exploding expectations, will remain. 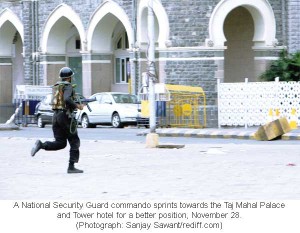 A conflict can be termed asymmetric when either the political/strategic objectives of opponents are asymmetric or when the means employed are dissimilar. To analyze asymmetric warfare, it is vital to place it within a proper context. Militaries have always attempted to seek asymmetric advantages so as to inflict maximum damage to the enemy at minimum cost. Asymmetric strategies are especially favored by the weak because they tend to offset the conventional superiority of their opponents. Sun Tzu noted that, in general, one engages in battle with the orthodox and “gains victory through the unorthodox”.8 It also needs to be understood that there is a requirement to focus on specific threats with substantial evidence behind them; recognize that due process of law and the fight against terrorism go hand-in-hand; and that liberty and security are inseparable. As Benjamin Franklin wisely pointed out, “They, who would give up an essential liberty for temporary security, deserve neither liberty nor security.” The only way we can combat the loss of our freedom is to know exactly what we have to lose, what it means and how we can protect it.

Counter-insurgency and nation-building are different situations from the task of countering Islamic radicalism, but the utility of military force is often only marginally greater. The war cannot be won simply by killing the insurgents. We need to dissuade potential insurgents and those who are recruiting, training, and deploying them. Modern counter-insurgency doctrine rests on the truism that achieving lasting stability even, in the face of an armed insurgent enemy depends primarily on non-military actions and tools: building viable political institutions, resuscitating the national infrastructure, spurring the local economy, creating effective police forces, and much more. The security provided by large military forces may be an ongoing, sustaining pre-condition for such results, but it cannot guarantee them. Concomitantly, the actions of military forces run the risk of empowering the terrorists or insurgents by alienating the local population. The differences between terrorism and insurgency are outlined in the table below: 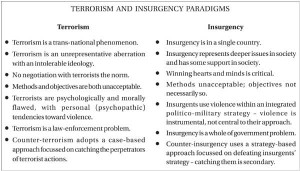 It is a mistaken notion that attainment of security is solely a function of military action alone. This is not arguing that military forces have no role in counter-insurgency, but stressing their extreme limitations. Where progress has been achieved, in counter-insurgency and counter-terrorism campaigns, it is attributable largely to political and economic factors rather than military ones. Asymmetric challenges demand asymmetric responses – political, economic, cultural, informational, and psychological tools, tactics, and techniques that work over time, not by military forces whose true purpose is to fight and win wars.