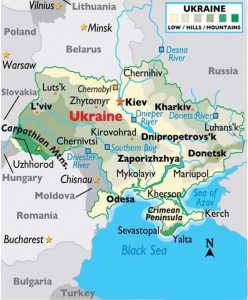 The cold war 1.0 may have been declared to be over with disintegration of USSR, but the NATO – Russian tug of war kept it alive, leading to an avoidable conflict, triggered by ‘Big Power Contestation in Ukraine’, which has escalated to dangerous dimensions, rolling over to second week of intense battle, with accusations of nuclear references by both sides.

Any invasion into another sovereign country (including the Russian offensive in Ukraine) has disastrous consequences for the people and should be denounced.

With few security guarantees, it was avoidable, but the big power contest spiralled it, with crude display of heroism by President Zelensky, who failed to read the extent, depth, and impact of Western support and President Putin’s unwavering resolve, and thus continues to pursue an unwinnable war, notwithstanding the standing ovations by West for his heroics, pushing the people of Ukraine to disaster, with speediest refugee crisis of 1.5 million people in 15 days, fastest since World War 2.

With few security guarantees, it was avoidable, but the big power contest spiralled it, with crude display of heroism by President Zelensky, who failed to read the extent, depth, and impact of Western support and President Putin’s unwavering resolve…

The call by West to uphold sovereignty, morals and rule based order are situational, after similar trampling of sovereignty in Iraq, side-lining democracy in Afghanistan to negotiate a deal with Taliban by NATO, replacement by government of terrorists and the resultant disaster must be equally condemned.

If China was likewise sanctioned for occupying features in the South China Sea and intruding in Ladakh, the West’s argument for punishing sanctions on Russia by West would have made more sense.

The miseries of women and children in Iraq, Afghanistan, and Syria are comparable to those of the people of Ukraine, and the international community should have avoided all of them all in order to maintain a moral high ground. The global stance, therefore, continues to be driven by selective national interests.

How has the Conflict Shaped up so far?

The intense fighting has seen heavy casualties both sides. Having completed offensive posturing of Ukraine from three sides, Russia can be accused of breaching its sovereignty, despite signing ‘The Memorandum of Security Assurance’ at Budapest in 1994, wherein Russia, US and UK assured that sovereignty of Ukraine will not be compromised, which was a major factor in Ukraine returning the nuclear arsenal located in its territory back to Russia  and signing NPT, and the US and UK unable to send boots on the ground to protect it.

On the other side NATO, despite former US Secretary of State James Baker’s famous “not one inch eastward” assurance, continued eastward expansion, after adding 14 countries, reached at consideration of Georgia and Ukraine, giving adequate reason for Putin to adopt the course of military adventure to physically secure Russian security interest by occupying strategically sensitive areas in Ukraine to avoid possible deployment of NATO arsenal threatening Russia.

The occupation of nuclear plants, important strategic assets and cutting of essential services like electricity, supplies, internet of Kyiv and other townships is in progress, as Zelensky continues to resist.

In last eleven days the battle has reached from preparatory stage to Dog Fight stage, wherein  Russian military has shaped the battlefield by progressing its main thrust towards Kyiv, which is the Centre of  Gravity to achieve political objective of imposing No-NATO diktat on its political leadership or force a regime change, through the shortest route from Belarus. This was preceded by cyber-attacks and information warfare.

Under the banner of ‘Special Operations,’ beginning with air and missile strikes to neutralise air defence capability, air assets and pulverisation of military targets helped achieving almost air supremacy. The military aim of demilitarising Ukrainian military to ensure that Ukraine cannot be used as a springboard by NATO against Russia is yet to be achieved, although isolation of Kyiv has been done.

The process of investment, pulverising and softening of key strategic targets in and around Kyiv continues, so that Russian forces minimise casualties by reducing fighting in built up area  to the extent possible, if Ukraine doesn’t give up its demands earlier.

The subsidiary thrust to Kharkiv faced an unexpected resistance, but has made considerable progress. Certain neighbouring towns along the main thrust lines are also being pulverised by heavy air/arty/missile strikes to ward of threat to its shaft/ axes of maintenance when the spear of offensive penetrates Kyiv. Simultaneously Russia has also launched offensive to cut off warm water access to Ukraine in the south, where the battle seems to be reaching the consolidation stage.

The occupation of nuclear plants, important strategic assets and cutting of essential services like electricity, supplies, internet of Kyiv and other townships is in progress, as Zelensky continues to resist.

Ukraine has shown strong resolve to fight under leadership of President Zelensky, having deliberately prepared for the conflict. Realising the asymmetry in holdings of military assets, Ukrainian military has concentrated on defensive deployment in built up areas to give pitched battle in townships having lost the air cover in initial stages of battle.

The strategy is to deploy military assets in civil areas, provoke civilians to fight and gain propaganda advantage out of civilian casualties. The aim is to mitigate asymmetry of military assets by drawing Russian military into street fighting, forcing heavy casualties on them, using built up areas as fortresses and later adopt urban insurgency model to fight.

NATO and the West can also be accused of adding fuel to fire, launching Non-contact warfare spearheaded by robust economic offensive with crippling sanctions on Russia, leaving no room or incentive for Putin to slow down.

A neutral Ukraine as buffer between NATO and Russia would have met the security interest of all parties, but big powers kept playing games to disturb it.

The massive information warfare and diplomatic campaign launched by West in conjunction with Ukraine has projected Zelensky as hero, motivated enough to continue fighting till Ukraine’s disaster on behalf of West, and Putin as villain, who has only one option to maintain his position amidst financial crisis of his people i.e. a military victory in Ukraine.

A neutral Ukraine as buffer between NATO and Russia would have met the security interest of all parties, but big powers kept playing games to disturb it. Neither Russia nor NATO want to join their land borders in sensitive geostrategic location of Ukraine. The catastrophe can best be mitigated by diplomatic talks, accepting neutral Ukraine, setting aside rhetoric, sentiments and egos.

Two rounds of talks yielded no results and the trend will continue, unless there is change in demand of any of the parties to the conflict. Although Ukrainians are fighting bravely, but gross asymmetry in combat power, in favour of Russians will prevail.

Regardless of the outcome of the fight, Ukraine is physically destroyed, Russia is financially pained, and Europe, despite putting up a brave united face, is shivering at the prospect of an energy crisis, besides disruption of its seven decades of peace.

While the America may be overjoyed by rising stock prices in its arms industry and halting of Nord Stream 2 pipeline project which is seen as a threat, with the potential for increased energy dependence of more NATO allies on Russia to strategically weaken NATO, a grouping posing to be united, junking energy interest over collective security, for the time being.

This conflict, however has the potential to accelerate decline of US as superpower, by exposing inability of US in influencing outcome in sensitive conflict of Ukraine so far. US may also find it difficult to intervene anywhere, after demonising Russia for the same act, besides partnering angered EU in the long run, whose peace, economy, and energy supply chain stands disturbed for long time.

If Russian punishment is too heavy then it might discourage China from further aggression and if Russia comes out victorious, it might encourage China to repeat it in Taiwan and other places outside NATO…

NATO’s inability to meet over-expected demand of Zelensky of providing ‘No Fly Zone’ to Ukraine will frustrate him further, as sufferings of Ukrainians increase, notwithstanding the fact that he was told that NATO will not put boots on ground in Ukraine.

Ukraine conflict is also putting Russian resolve, arsenal, strategy and operational art to test, the lessons of which will be applied in future wars. Russia is concentrating on military victory for the time being, but will face resounding setback economically.

If Russian punishment is too heavy then it might discourage China from further aggression and if Russia comes out victorious, it might encourage China to repeat it in Taiwan and other places outside NATO, because probability and potency of sanctions by West on bigger economy like China are very low, as West never dared such an option, despite China trampling sovereignty of others.

This conflict has also shown futility of some global bodies like UN, which seem strong against weak countries and helpless and defunct against strong countries.

Over-reliance on sanctions by US and West, acts like CAATSA in inter-dependent world mark the beginning of alternate, non-western financial system to avoid economic offensive/coercion and weaponisation of global financial order. It could be a reality as some baby step were taken in terms of  BRICS bank and AIIB, which may get further accelerated.

India needs to factor the weak western response to Ukraine crisis in its strategic calculations, as it can embolden other authoritative powers like China to take similar actions in Indo-Pacific region.

This conflict will encourage many countries to develop own capacities and self-reliance in defence, besides facing the global economic set back in the interconnected world. If viewed in conjunction with corona virus pandemic and aggressive China, world needs alternate global factory and supply chain independent of China and alternate financial system independent of west, which may take at least a decade, but will get expedited.

The first priority for India is to evacuate its own students and diaspora, in which it has achieved considerable success by launching operation Ganga, evacuating almost 80 percent Indian nationals. It can push for diplomatic solutions and peaceful resolutions, as well as measures to reduce temperatures, but it should avoid taking sides because it has good relations with all affected parties and no side holds moral high-ground, having been part of the problem.

India needs to factor the weak western response to Ukraine crisis in its strategic calculations, as it can embolden other authoritative powers like China to take similar actions in Indo-Pacific region. Indian concerns also include trade with Ukraine and impact of sanctions, which need to be factored.