Current State of Modernisation in the Indian Artillery 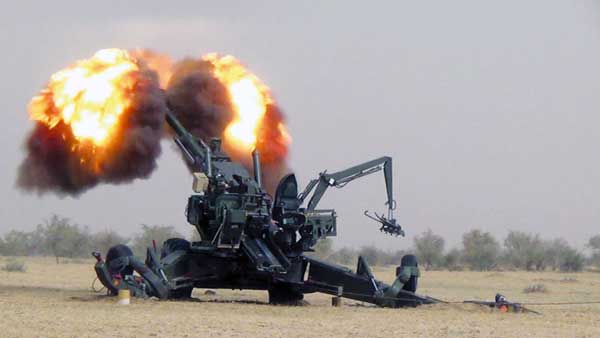 The Indian Artillery is currently in a Network Centric Warfare (NCW) Environment and has to provide Surveillance and Reconnaissance resulting in Target Acquisition which would lead to engagement which needs to be monitored to undertake Post Strike Damage Assessment and ensure that the target is destroyed. In NCW, Artillery shapes the battle field, degrades enemy’s war waging capability, destroys his field defences, communication sites, logistics echelons thereby paralysing him and thus accomplishing our mission.

The Regiment of Artillery is currently equipped with a variety of surveillance devices, Guns, Mortars, Rockets and Missiles. The surveillance devices are a part of the Surveillance and Target Acquisition (SATA) Regiments. The devices currently held comprise the Unmanned Aerial Vehicles (UAVs) which are of four types. These are the Medium Altitude Long Endurance (MALE), Heron UAV and Short Range UAVs Searcher MK I, Searcher Mk II as also four indigenously built Nishant. These UAVs have been operationally optimised and they are an extremely useful tool of surveillance. Our current holdings are minimal and their numbers need to be enhanced. The DRDO is currently developing a MALE UAV Rustam which will possibly be inducted in the short term.

The SATA units are currently equipped with Medium Range Battlefield Surveillance Radars (MBFSR) and Weapon Locating Radars (WLR). The MBFSR currently held is the ELM 2140 which is able to detect tanks, vehicles and troops. They are held in minimal quantities and been exploited by mobile masts. The WLR currently held is the ANTPQ – 37 which has been optimised with a reasonable degree of success. Further SATA units are equipped with Long Range Reconnaissance and Observation System (LORROS). This equipment has excellent day and night surveillance capability and has proved its effectiveness in operational areas. The SATA units also have a passive Weapon Locating system known as Sound Ranging. The system currently held is old and needs to be replaced by state of the art equipment. Bharat Electronics in conjunction with DRDO has developed a Weapon Locating Radar which is being inducted after evaluation trials.

The Regiment of Artillery is holding Rockets and Missiles. The Rocket Regiments are equipped with 122 mm GRAD BM -21 rockets, 214 mm Pinaka Rockets and 300 mm Smerch Rockets. The Missile Regiments are equipped with the Super Sonic Cruise Missile BrahMos which has a range of 290 km. Recently India has joined the Missile Technology Control Regime which has resulted in trials for extending the range up to possibly 400 Km.

Recently the Regiment has inducted six 155 mm (45 calibre) Dhanush Gun systems manufactured by the Ordnance Factory Board. It is also reported they have placed an indent for 114 of these Guns. This is to be followed by a further order of about 300 Guns. The Gun is designed, developed and Made in India which enhances our indigenous capability of manufacturing state of the art equipment. Further the equipment has undergone extensive evaluation trials and would attain a maximum range of about 38 Km.

The other Guns pertain to the 155 mm Ultra Light Howitzer (39 calibre) and the Self Propelled Gun K 9 Vajra (52 Calibre). The Ultra Light Howitzer (ULH) is manufactured by BAE Systems and is being procured by the Foreign Military Sales Route from the United States (US). The Letter of Acceptance (LOA) has been received and the process of induction has commenced. While a few pieces would be obtained from the Original Equipment Manufacturer, the remaining would be Made in India by Mahindra Defence. The Gun is extremely light and can be helilifted by a helicopter Chinook, CH 47 C which is being procured by the Indian Air Force. It is expected that 145 pieces would be added to the inventory.

The K 9 Vajra is a Self Propelled (SP) Gun and is an indigenised version of a South Korean SP Gun which would be Made in India by Larsen and Toubro Limited. The Gun would be utilised in the desert regions bordering our Western Front and would be the first SP Gun after the 105 mm Abbot and the 130 mm Catapult to be inducted into The Indian Army. About 100 pieces would be the initial order. The Contract has been signed and the Gun would be manufactured at the Larsen and Toubro plant at Talegaon, near Pune. Assistance will be provided by Samsung Techwin for the project.

This is a thundering moment for the Indian Artillery which has broken the glass ceiling and taken a Great Leap Forward in the field of modernisation.

The 73 days Doklam issue which China has made the Indian Artillery realise that it has to be fully prepared for a full spectrum two front War. The battle space is likely to be:-

The Indian Artillery is currently on the threshold of a new era with modernisation moving at a steady pace.The Regiment has expedited the modernisation process particularly with regard to Guns and Ammunition.

There has been a great break through as far as indigenous development is concerned with the development by DRDO of the Advanced Towed Artillery Gun System (ATAGS). Two prototypes have been developed by Bharat Forge and Tata Strategic Engineering Division. During the development trials the Bharat Forge Gun has achieved a range of over 48 Km in September 2017. This is a great achievement and there is a need to start the process of User Trials followed by General Staff evaluation. This would really ensure that a Gun which is designed and developed in India enters our inventory.

The other achievement has been in the field of Supersonic Cruise Mille BrahMos. It has qualified in the user trials for the steep dive version of the missile, thereby enabling the equipment to be deployed in the mountains. Further the missile in a current test has ranged 400 Km. There is a requirement to enhance the range to 600 km to engage suitable depth targets across the borders. It should be possible to achieve this range without changes to current equipment configuration.

Now let us examine our challenges. It is sad that the Request for Proposal for the 155 mm (52 calibre) Mounted Gun System has lapsed. This is an extremely important system as the Gun could be employed universally and has the Gun mounted on the vehicle. The trials of 155 mm (52 calibre) has been completed and the same has been referred to an empowered Committee. The Extended Range Pinaka Rocket of 60 Km is also shaping well in the trials undertaken by DRDO. The Pinaka and the Smerch must be configured for deployment in the mountains and the Gunners need to address this issue with deliberation. We also need a long range Mortar for which suitable efforts must be put in. In addition we need to analyse the cause for barrel bursts taking place which could be due to equipment or ammunition failure.

The Regiment also needs Unmanned Combat Aerial Vehicles (UCAVs) and Loitering Missiles. To enhance our surveillance of Depth Areas we would need Aerostats which would help us in acquitting targets. Our surveillance equipment needs to be beefed up with additional equipment as also there is a dire need for Satellites to provide surveillance and target acquisition. The Artillery Combat Command and Control System (ACCCS) will be combining these elements to provide Synergise Firepower. The system needs to be updated and introduced in all formations.

As regards ammunition we need to seriously examine the employment of Precision Guided Munitions (PGMs) to ensure destruction of targets by accurate fire. The Regiment of Artillery needs to seriously consider this aspect and evaluate our requirements considering the prevalent operational environment. Further, Sensor Fuzed Ammunition needs to be procured for precise engagements of mechanised targets.

Artillery has completed 190 years since its raising. There is a need to modernise our Surveillance System, Guns, Mortars, Rockets, Missiles and Ammunition to meet the challenges depicted above. It is indeed heartening to see steps taken to enhance our Firepower.

It is time now to think about the future. The ongoing cases would possibly fructify in the next decade. What are the issues we must get involved in to ensure that we are not left behind ? These are as follows:-

•  Precision Guided Munitions (PGM) which could be co developed between the DRDO and Raytheon. The 155 mm Excalibur is an excellent PGM which could be Made in India, making it an excellent weapon against targets needing precise engagements which would include terrorists hideouts across the Line of Control.

•  The UCAVs are the need of the hour. These could be Made in India with initiative taken, like in the case of UAV by Directorate General of Artillery.

•  There is a need for Hypersonic Cruise Missiles. The Directorate General of Artillery must ensure that BrahMos Aerospace works towards this end.

•  Development of a 200 Km Gun using rocket projectiles. DRDO could co develop this with Lockheed Martin which has developed a 62 calibre naval gun and is keen to Make in India.

•  There is a need to develop Direct Energy Weapons particularly Microwave Weapons which can be used on Missiles, lasers on UCAVs and the electromagnetic rail gun.

Artillery must get involved to ensure that they continue in their race forward.