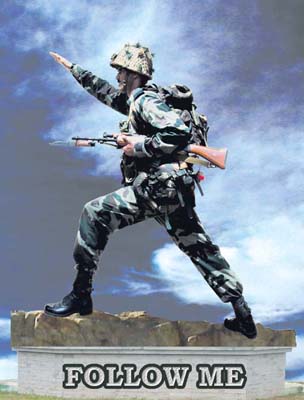 The concept of Colonel Commandants (Col Comdts) dates back to the 17th century when Colonels (both in rank and appointment) were the original owners and field commanders of their units (regiments). With the evolution of the concept of field formations in the early 18th century, these units lost their independent entity and were grouped into various tactical formations. Gradually, the Colonel lost his executive powers and the units came to be commanded by the duly selected commanding officers with the rank of Lieutenant Colonel. Subsequently, the Colonel became a mere figurehead with advisory functions only.

All regiments, which originated as a single tactical unit (infantry/cavalry), still have a ‘Colonel’ as head of the family, whatever be the size of that family now. Other corps/regiments, which originated as groups of tactical units, have Col Comdts. The number of Col Comdts is determined by the overall strength of the corps/regiment. Their selection is carried out by the respective regiments through secret ballot.

Gradually, the Colonel lost his executive powers and the units came to be commanded by the duly selected commanding officers with the rank of Lieutenant Colonel.

A Colonel Commandant is not involved in the operational affairs of his units. He is considered a ‘conscience keeper’ of the regiment and a guardian of regimental traditions. He is like a father figure whose basic duty is to foster esprit-de-corps and render mature advice when required. As he is expected to look after all aspects of welfare of his regimental troops, he must be of sufficient seniority to deliver. In case a regiment does not have any of its regimental officers in higher ranks, it can request a non-regimental officer to hold the mantle.

The aim of this article is to take a look at the relevance of this institution in the present day environment. With mushrooming of senior appointments, every regiment is well represented at higher ranks. Therefore, are the crutches of a Col Comdt necessary for a regiment to get its due? As the issue is of vital importance to the health and well-being of the army, an open and honest debate is warranted.

The institution of Col Comdts is the root cause of growth of parochialism in the army. The underlying concept of the institution is based on unethical expectations of gaining undue dispensations for the regiment. Col Comdts are not elected because they are mature enough to be the father figure. The only criteria is their potential to contrive maximum benefits for the regiment, both deserved and undeserved. That is the reason why all prospective Chiefs and Army Commanders are much in demand. It is a simple equation of quid pro quo. Regiments ‘invest’ in a Col Comdt and expect favours in return.

Even the schedule of turn-over of units is subjected to undue influences. Thus, the institution of Col Comdt breeds parochialism and encourages factionalism; thereby adversely affecting organisational cohesion.

The moment a commander is elected as a Col Comdt, he is made conscious of his obligation to his electors. Through repeated invoking of the regimental spirit, he is constantly   reminded of his moral commitment to dispense favours to his regiment. Gradually a stage is reached when he loses all inhibitions and openly flaunts his regimental bias. He has no qualms in awarding unit citations and Commendation Cards on regimental considerations. Even the schedule of turn-over of units is subjected to undue influences. Thus, the institution of Col Comdt breeds parochialism and encourages factionalism; thereby adversely affecting organisational cohesion.

It must be remembered that every act of partisanship by a Col Comdt that results in unmerited gains for the regiment has to be at the cost of more deserving claimants. Thus, regimental affiliation replaces merit and many deserving personnel suffer. Worse, the army is deprived of the best talent available. There are numerous cases where mediocre officers have risen to higher ranks by latching on to their Col Comdts and invoking the plea of regimental loyalties. It will not be incorrect to aver that a significant proportion of top military leadership owes its promotion to the munificence of their Col Comdts. It is a largesse they least deserve. No wonder that the army is saddled with sub-optimal higher leadership at present.

When selection for higher ranks is influenced by regimental affiliations, undeserving officers get promoted. Policies are changed, dispensations are given and additional vacancies allotted to a batch to promote such officers. Even adverse remarks in their confidential reports are removed. The rot has spread to such abominable levels that Army Commanders (being Col Comdts) conspire to join hands at the time of promotion boards to ‘help’ each other’s regimental officers on quid pro quo basis. Whereas impartiality is an ethical requirement, there cannot be a more disgraceful travesty of the much trumpeted merit system.

Being an anachronistic and retrograde institution, it inhibits progressive thinking and breeds unhealthy predisposition. Col Comdts rise in rank but fail to ‘grow-up’. They remain mired in narrow mindset of regimental level loyalties and concerns. They fail to acquire breadth of vision to be able to comprehend larger issues and remain stuck with trivial matters. When a senior commander spends most of his time on petty regimental issues, he demonstrates his incompetence to handle the responsibility that his appointment carries and proves himself to be unworthy of the high rank that he occupies.

It certainly reflects poorly on army’s standing as a “˜fair and just establishment. Partisanship practiced by Col Comdts is the primary cause of this loss of credibility.

Many Col Comdts are known to view every matter with blinkered vision. Their recommendations on every issue are based more on the basis of regimental interests than what is good for the organisation as a whole. It is sad to see senior leadership identifying themselves with a ‘part’ (their regiments) while heading the ‘whole’ (their commands). Their narrow outlook and prejudiced mindset inhibits their growth as mature and forward-thinking military leaders.

With a view to demonstrate their ‘loyalty’ to their regiments, all Col Comdts try to apply rules in a selective and arbitrary manner to further interests of their regiments, thereby vitiating the environment. It has been a major cause of disaffection in the army. The aggrieved soldiers lose faith in the sense of fair play of military leadership and get forced to approach courts for justice. No organisation can retain confidence of its members unless there is credible merit-performance ethical linkage in place.

An exponential increase in the number of court cases is indicative of soldiers’ lack of faith in the fairness of the system. It is reported that over one lakh cases (pertaining to the armed forces personnel) are pending in various courts with close to 10,000 cases lying in different High Courts/Armed Forces Tribunals. Soldiers knock at the doors of courts as a last ditch desperate step – only when they lose all hopes of getting their rightful due in the organisation. It certainly reflects poorly on army’s standing as a ‘fair and just’ establishment. Partisanship practiced by Col Comdts is the primary cause of this loss of credibility.

Regimental spirit is a battle winning factor at unit/battalion level and acts as a force multiplier.

The concept of electing a Col Comdt is akin to ‘Swayamvar’ of the olden days – unsuccessful aspirants feel rejected and nurse a grudge forever. Both generate ill will and breed dissentions.

The most worrisome fallout of skewed conduct of Col Comdts is that the environment has come to accept its inevitability. No eyebrows are raised when a Col Comdt is seen to be bestowing undue favours on his regiment. On the contrary he is eulogized for his regimental spirit. It is considered to be the ‘done’ thing. Others wait for their Col Comdts to acquire similar authority to help them. Thus the cycle goes on at the cost of organisational health.    It is quite akin to political parties waiting to come to power to share the booty.

Regimental spirit is a battle winning factor at unit/battalion level and acts as a force multiplier. However, when carried to higher levels by over-zealous Col Comdts, it becomes counterproductive and affects group cohesion adversely. By giving precedence to regimental affiliation over merit, the system loses talent as well as credibility. The institution of Col Comdt is an archaic legacy that is divisive in nature and encourages fissiparous tendencies. Having lost its relevance, it has become detrimental to the health of the army and should be abolished.

One thought on “Colonel Commandants: An Archaic and Parochial Institution”