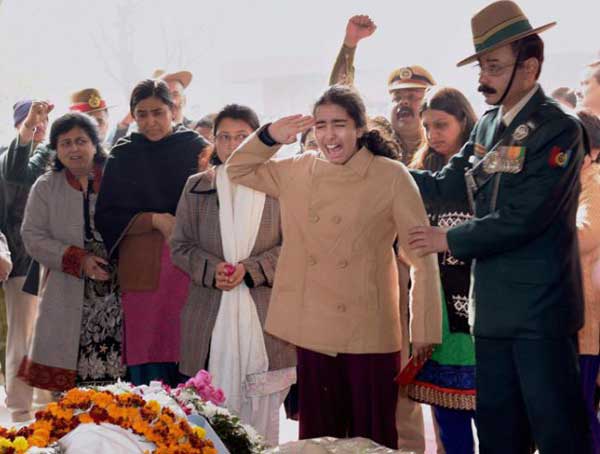 “Listen to me…. Are you listening…. I am saying something to you…”

As the mortal remains of Late Col Munindra Nath Rai were finally being lifted for performing last rites at the capital’s Brar Square cemetery, these were the last words of Priyanka Rai, the ill-fated wife of the colonel. She wanted to touch her tricolor-clad husband for the last time. “I want to touch him… allow me,” pleaded a bewildered Priyanka, realising last stages of preparations. The otherwise crumbling Priyanka swiftly gathered courage to elevate her body and rolled her wavering fingers on the face of her husband. “Listen to me…. Are you listening…. I am saying something to you,” she cried hoping against the hope to hear a response.

It was the treacherous betrayal of trust which cost the 39 year old colonel his life, 24 hours after he was honoured for his bravery with a Yudh Seva Medal (YSM) on Republic Day.

For a second, Priyanka revisited each moment lived with her brave husband. A short while earlier, relatives helped her stand with (a handful of) wreaths/ flowers in her hands but she collapsed before laying them. Bereaved family members and close relatives struggled to console Priyanka all this while at Brar Square where the wreath laying ceremony was performed.

It was the treacherous betrayal of trust which cost the 39 year old colonel his life, 24 hours after he was honoured for his bravery with a Yudh Seva Medal (YSM) on Republic Day. The officer made the supreme sacrifice fighting terrorists in Kashmir. The Army received an input about two terrorists hiding in Hardoona village of Tral in Pulwama district. The valiant and high-spirited commanding officer decided to lead the operation and his troops surrounded the village. The Army reached the home of the militants. Col MN Rai was told by the family that the military need not kill the ‘boys’ as they would instead, surrender. It is part of Army’s widely known tradition in Kashmir that it tries its best to provide an opportunity to surrender, barring notorious and hardcore terrorists.

It was when the so-called ‘surrender’ was being discussed, that the militants emerged and fired at the officer. Both the terrorists, Abid Khan and Shiraz Dar, were killed in retaliatory fire by the Army. But the officer too could not be saved. Abid Khan, son of Jammu and Kashmir police constable Jalaluddin Khan, joined Hijbul Mujahideen in September 2012. Tral, a known militant hotbed, had witnessed growing engagements of youngsters in cricket and football tournaments in recent times, thanks to the initiatives taken by Col MN Rai.

When the mortal remains of the tricolor clothed Col MN Rai were brought in at Brar Square, the six year old son of Rai was saluting the martyr. Unable to comprehend the loss, he was not weeping. Eight year old Richa sat close to her father embracing his portrait and holding his medals in hands.

Tears were ceaselessly rolling own the cheeks of eleven year old Alka, who was very young to bear the excruciating pain. She rose in a flash, saluted and shouted Gurkha war cry- ‘Hoyke hoyena….’ with a choked throat. The Gurkhas responded several times over ‘Hoyke Hoyena…. Honu Hi Parchha. This means- ‘Will you be able to accomplish the task…. Yes, surely we will…’ Alka may have thought her father will respond to the war cry like earlier times. But this time it was not to be.

The Chief of Army Staff Gen Dalbir Singh Suhag arrived to meet the family. He hugged colonel’s ageing father tightly. To find the chief approaching at her, an already inconsolable Priyanka burst into a fresh spell of tears. “They killed…. they killed…. My husband,” she cried. “Madam you please don’t worry, we will take care of everything. This is our duty. I am here my child,” replied Gen Suhag looking at the children.

“He always believed in leading from the front,” recalls Maj DP Singh, one of the course mates of Col Rai. “He had the ability and guts to simplify tough situations with sound planning,” he adds. Maj Rajesh Arora, who pursued Battalion Weapon Support Course with the martyr, remembers him as a simple, courageous and fun-loving officer.

Col Rai, originally belonging from 9, Gurkha Rifles, was on deputation with 42, Rashtriya Rifles. Maj Gen Anil Bhatt, colonel of the regiment, 9 Gurkha Rifles, has seen the martyr from close quarters. He remembers Rai as an officer who had the passion to lead such operations.

…it is the valour of soldiers like Col Rai that all of us sleep peacefully, everyday, all the year and throughout over lives.

“Last year Col Rai killed three terrorists in an operation in Kashmir,” recalls Maj Gen Bhatt. He, along with his wife and some officers, went to inform the irreversible loss to the family. The Major General was surprised to take note of the firmness and grit of Col Rai’s daughter. “My father has laid down his life for our motherland and I am proud of him,” she said to the senior officer showcasing her nerves of steel.

Col Rai was the youngest in the family of three brothers. His eldest brother, Lt Col Dhirendra Nath Rai too serves in the Army. The other, Yatindra Nath Rai, is a Commandant in the Central Reserve Police Force (CRPF). Yatindra too sustained bullet injuries in the infamous Raghunath Temple attack in Jammu in 2002.

The last status update of Col Rai on whatsapp illustrates heroism in his personality. The screenshot displays, “Zindagi mein apna kirdar aise nibhao ki; Parda girne ke baad bhi taaliyaa bajti rahein.” The couplet means: “Let’s perform the assigned role in life in a manner that it keeps others clapping even when the show gets over.”

As the cremation comes to a close, we will be left with only memories of Late Col MN Rai. What needs to be reminded/ realised is the fact that it is the valour of soldiers like Col Rai that all of us sleep peacefully, everyday, all the year and throughout over lives. Else, the enemy never halts attempts to annihilate this country.