The Concept of Maritime Domain Awareness

In April 2010, the NCSMCS approved the concept of National Maritime Domain Awareness (NMDA) for an integrated information grid for sea-farers. Basically, this revolves around Navy’s National Command, Control, Communication & Intelligence (NC3IN) system at the centre of the hub. This will generate a ‘Common Operational Picture’ (COP) through an institutionalised mechanism of collection, fusing and analysing information, involving:

The issue of lack of coordination between various agencies involved in coastal security still persists.

The concept of MDA is not new to the Navy. In its traditional domain, whether in the strategic, operational or tactical roles, the Navy has been in this business all along. This is part of its SOP in all four domains – sea, sub-sea, air and cyberspace. Since 26/11, this concept is now required to be carried forward to the National level and stretched to include coastal security and strategic maritime concerns, in a holistic manner.

Unfortunately, the system being created in the twenty-first century is still geared to work in stovepipes.

The MDA is only one element of the coastal security architecture which receives, collates, analyses and makes the information accessible to all stakeholders for action. To that extent, the Navy as a facilitator can be nominated as the situational head in the form of the Nodal Agency. Each domain stakeholder must be held responsible for converting this domain awareness capability empowerment into pre-emptive/proactive/reactive actions.

The MDA architecture must provide for networked inputs from and outputs to all stakeholders including the National Intelligence Agencies, on real time basis. The Regional and National Maritime Operations Centres must be manned by professionals with domain knowledge and the capability to sift out actionable information from raw intelligence inputs from multifarious technical and human sources and create a realistic comprehensive Common Operational Picture. To assist in handling this task speedily and efficiently, computerised data integration and automated algorithms to assist in handling such vast and disparate data stream would be essential. Embedding of an intelligence agency element here on reciprocal basis, would enrich and enhance the effectiveness of the system

It would be seen from the MHA’s reports that in terms of hardware, considerable stress has been laid on putting in place technological wherewithal to meet the requirements of surveillance. The HUMINT capability with respective stakeholders is at present very weak. Sufficient attention has not been paid in evolving an overall C2 mechanism down to grassroots level. Having an apex-body at the national level is not sufficient. C2 structure at all levels must be formulated, promulgated and implemented. Situational Heads for each domain must be identified and notified so that accountability is not in doubt.

In Sept 2010, the Cabinet Committee on National Security approved the CSS Phase II with an outlay of Rs 1,100 crore for the five years (2011–2015). The CSS Phase II regional allocation is tabulated in Figure 3. 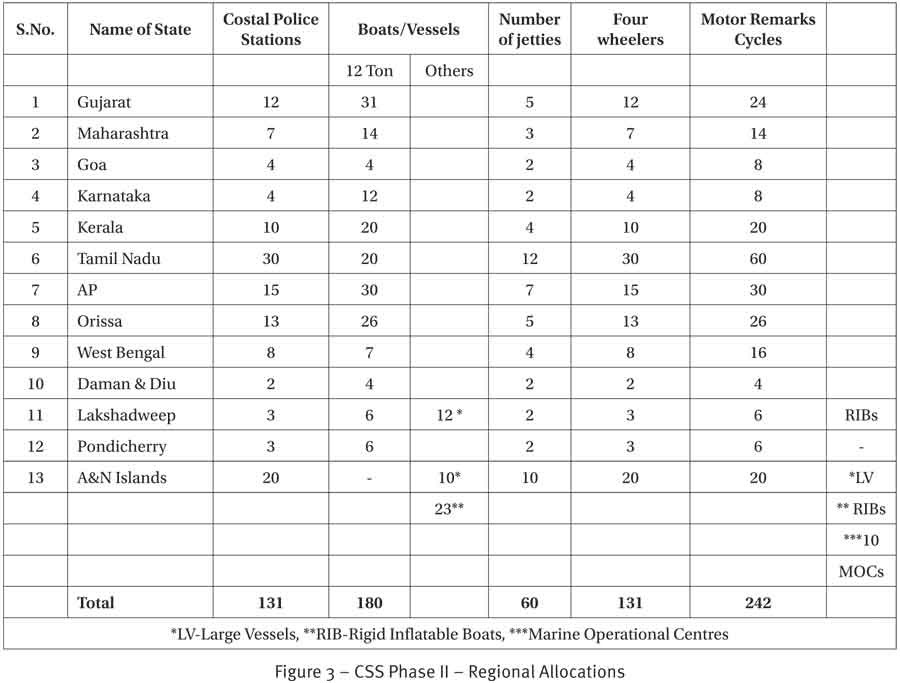 The Navy has also been authorised a thousand strong dedicated specialised force, called the Sagar Prahari Bal, whose role is to provide security protection to all naval assets and bases on the East and West coasts and the island territories.

The proposal of creating a National Maritime Advisory Board with a Maritime Adviser is presently on hold and the Navy seems to have reconciled itself to the idea that the NCSMCS with the CNS as a member adequately meets the need. However, the issue of lack of coordination between various agencies involved in coastal security still persists and most of the governments in the coastal states continue to remain indifferent to coastal security.

The recruitment policy for the Coastal Police Force (CPF) needs to be reviewed. The scheme of inducting volunteers from the local police has not worked out. Since there are only few volunteers most of the undesirables have been palmed off to CPF. Most are land lubbers, prone to sea sickness and disgruntled. It appears that the grant of an incentive of fifty per cent of the basic pay as additional allowance is inadequate. Unless there are enough motivated, dedicated and capable boots on the ground as beat constables both ashore and afloat, this scheme is unlikely to work out.

…it would be more appropriate to give the DGCG additional charge of the over all coastal security arrangement and formally designate him as the situational head for the entire coastal security system, duly empowered.

The Maritime Police Force needs to be an elite force – hand-picked, with specific expertise for each category of personnel. They must be duly trained and well compensated to attract the best human resources. Those on the beat and in the police stations must not only be competent but also sensitised enough in order to have the confidence of the local population. Those manning the patrol vessels should be drawn from the local sea-faring population and retired naval personnel.

As discussed earlier, the National Coastal Security System is a complex, multi-agency organisational set up which is still in its infancy. The CSS structure is based on a hub-and-spoke principle. The set-up has five basic levels and each spoke works in its own stovepipe. The CPF and the Coastal Force Police Stations (CFPS) are at the first echelon in one of the stovepipes. The raw information/intelligence and data collected at the grassroots, both from the HUMINT and TECHINT sources are transmitted to the Area Coastal Security Operation Centres (ACSOC) at the second echelon level. After sifting through the inputs from all sources, the relevant ones are forwarded to the State Coastal Security Operations Centres (SCSOC). The SCSOCs are collocated at CG District HQs. This is the third echelon. The next level is at the Regional Operations Centres (ROC), which are collocated at the CGROCs. The next echelon is at the four Joint Operations Centres (JOC) at Mumbai, Visakhapatnam, Kochi and Port Blair. This provides an integrated picture at all the Naval Commands. Finally, a Combined Operational Picture (COP) is generated at the national level at the National Maritime Operations Centre (NMOC).

The DGLH, Customs and IB operate independently in their respective stovepipes and feed the inputs generated within their domain, in a similar manner, to the ROC and then on to the respective JOC and finally, to the NMOC to create an overall Maritime Domain Awareness picture.

On the question of mind-set block and turf considerations coming in the way of progressive reforms, one needs to take a good look at the post-9/11 scenario in the USA, especially at the salutary changes brought about in the US intelligence structure.

Action within the domain of each entity is to be taken at the respective zonal level. The ICG’s assistance can be sought at the discretion of CFPS to deal with any situation outside its capacity. Similarly, when called upon, the Commander-in-Chiefs of the respective Naval Commands would provide assistance to the ICG. The onus of responsibility for action in the respective zones would squarely rest with the designated zonal agency.

Unfortunately, the system being created in the twenty-first century is still geared to work in stovepipes. Each sub-set is working independently and is only responsible to its own hierarchy. There is no structured single entity in place that is responsible and has the authority to oversee the functioning of all the stovepipes at each level in the entire system.

The system logic is that each agency in the stovepipe is expected to effectively fulfil its respective designated role. That is considered sufficient, for appropriate action to be taken by the Operations Centres at the hub. Periodic coordination meetings between the stakeholders and regular structured exercises are considered adequate to ensure performance.

Each of the agencies identified here is venturing into unchartered waters where they have little or no experience or expertise. The Navy, the ICG and the Original Equipment Manufacturers responsible for providing the sensors and the integrated network systems are being called upon to train their personnel. It seems that the Indian ethos does not permit the concept of situational heads (with overall domain expertise) being given authority and responsibility over the whole network.

In the circumstances, designating the Navy as a nodal agency and DGCG as the Commander of the Coastal Command seems a futile exercise. Firstly, there is no such entity as a Coastal Command. Also, in this context the questions that beg answers to are:

Suffice it to draw attention here to the way CIA has accepted the idea of embedding its operatives under the Special Forces with the US Central Command in Iraq and Afghanistan, and how the entire US Intelligence setup…

If results are to be expected from this initiative, it would be more appropriate to give the DGCG additional charge of the over all coastal security arrangement and formally designate him as the situational head for the entire coastal security system, duly empowered. In that capacity and as the Commander Coastal Command, he must be given full operational charge of all the stovepipes. The technical and administrative control can be retained by the respective departments. In the dynamic situation of today, for prompt action, an institutional mechanism must be put in place permitting oversight, coordination and operational control with one authority.

On the question of mind-set block and turf considerations coming in the way of progressive reforms, one needs to take a good look at the post-9/11 scenario in the USA, especially at the salutary changes brought about in the US intelligence structure. Suffice it to draw attention here to the way CIA has accepted the idea of embedding its operatives under the Special Forces with the US Central Command in Iraq and Afghanistan, and how the entire US Intelligence setup has been revamped to: