A constabulary role and coordination between the civil agencies lie wholly outside the scope and capability of the Indian Navy. The IN should not even consider venturing into those domains as it is already overstretched by the enhanced expectations from the developing scenario in the Indian Ocean Region and the South China Sea. Dealing with sea piracy is yet another pressing issue. The inability of the entire international maritime community to suppress the piracy menace originating from Somalia in spite of all its resources is a pointer to the dilemma.

After the serial blasts in Mumbai in 1993, post 26/11 attacks in Mumbai and the incidents of beaching of MVs Wisdom and Pavit on Juhu beach as well as the sinking of MV Rak off the coast of Mumbai – there was public outrage after each of the major tragic incidents.

On each occasion, public perception pointed a finger at the Indian Navy (IN). Notwithstanding the clear jurisdictional demarcation of responsibilities, the media also held the Navy guilty of dereliction of duty. Conveniently, the government also did not make any attempt to correct this flare-impression.

Seeking a rogue ship or craft in the middle of an ocean is nothing less than looking for a needle in a hay stack.

As an attempt is made to take stock of the coastal security architecture for a reality check, the vastness of the domain involved must be appreciated. Seeking a rogue ship or craft in the middle of an ocean is nothing less than looking for a needle in a hay stack. To keep abreast of the situation in a defined area of interest in, say Iraq or Afghanistan, the US had to deploy an array of surveillance satellites. Even then, 24×7 coverage was an impossible task. In addition, Airborne Warning and Control System (AWACS) aircraft, carrier-based surveillance aircraft and Unmanned Aerial Vehicles (UAV) were also extensively used along with Special Forces (SF) troops on the ground.

The vast Indian coastline of over 7,500 kilometres is spread along nine coastal states and four union territories. Security at the twelve major ports and almost two hundred minor ports in the country is of concern. The conventional security of the major ports is the responsibility of the Central Industrial Security Force (CISF), the minor ports being the responsibility of the State Maritime Board/State Government. Additionally, the twelve major ports, fifty three minor ports and five shipyards conform to the International Ship and Port Facility Security (ISPFS) requirements.

The traditional peacetime jurisdictional responsibility between the Indian Navy and the Indian Coast Guard was simple.

The traditional peacetime jurisdictional responsibility between the IN and the Indian Coast Guard (ICG) was simple. The ICG is responsible for the security of the Exclusive Economic Zone (EEZ); beyond that, extends the security responsibility of the Navy. The port authorities, the DG Light House (DGLH), customs, police, immigration, Intelligence Bureau and narcotics control agencies had their respective roles cut out for them along the coast, ports and harbour regions. Demarcation of responsibility in respect of the sea front security of coastal, industrial, military, DAE and off-shore establishments, was also clearly stipulated.

The truth of the matter is that none of the above incidents need have happened, had the institutions, designated for each task and zones, been geared up, alert and net-worked. The serious lacuna that existed at the time of 26/11 would be clear from the fact that since then over approvals with Rs 2,000 crore have been accorded by the Cabinet Committee on National Security for capital expenditure towards creating/upgrading infrastructure dedicated for coastal security. The systemic inter-departmental coordination inadequacies were crippling. These would take over a decade to overcome, provided the establishment has the will and determination to evolve and implement an out-of-the-box solution.

An apex body, the National Committee on Strengthening Maritime and Coastal Security (NCSMCS)against threats from the sea, wasconstituted.

Many agencies including the Central Government Ministries/Departments, the respective State Governments and linked local administrative/law enforcement/intelligence agencies are deeply involved in affairs of coastal security. The Navy should focus on its primary role and only be expected to provide overall guidance and maritime expertise in creating the necessary infrastructure, including coastal Command, Control, Communication, Intelligence and Surveillance (C3IS) network and provide training skills in preparing the personnel concerned for working in a maritime environment. Also, the coastal information network should be closely integrated into the networks of the IN and ICG’s C4ISR – so that an integrated scenario is always available. To the extent of maintaining a network capable of receiving inputs from the multifarious sensors/sources. Facilitating access to such information on real time basis to the concerned agencies is a responsibility the Navy could take on.

A constabulary role and coordination between the civil agencies lie wholly outside the scope and capability of the IN. The IN should not even consider venturing into those domains as it is already overstretched by the enhanced expectations from the developing scenario in the Indian Ocean Region and the South China Sea. Dealing with sea piracy is yet another pressing issue. The inability of the entire international maritime community to suppress the piracy menace originating from Somalia in spite of all its resources, is a pointer to the dilemma. Having said that, an overview of the measures taken by the government since the Mumbai serial blasts in 1993, on coastal security is discussed briefly in the succeeding paragraphs. 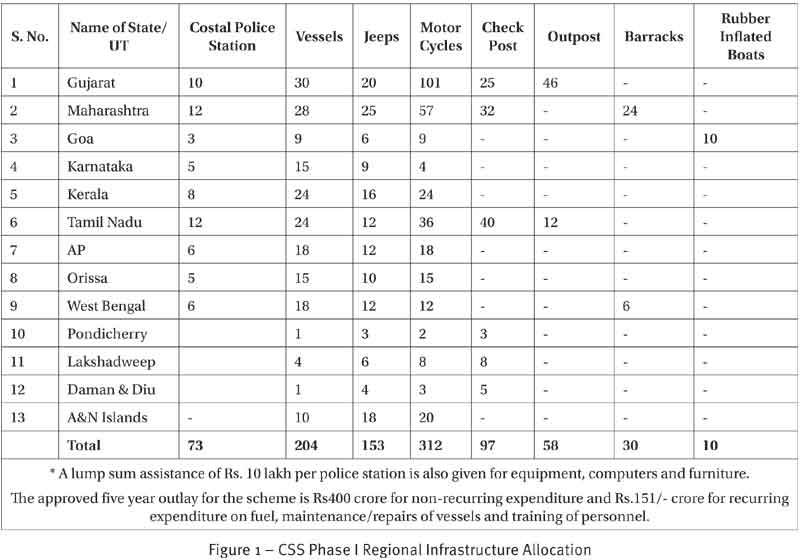 Following the serial blasts in Mumbai, Operation Swan was launched with the limited objective of preventing the landing of contraband and infiltration along the Maharashtra–Gujarat coast. Among other measures, the Government authorised the ICG an expenditure of over Rs 340 crore for acquisition of fifteen fast interceptor boats and setting up of three ICG Stations at Dhanu, Murad Janjune and Verawal. In 2000, the issue of coastal security was once again highlighted by the Task Force on Border Management as a part of the Kargil Review Committee recommendations. The recommendations included: 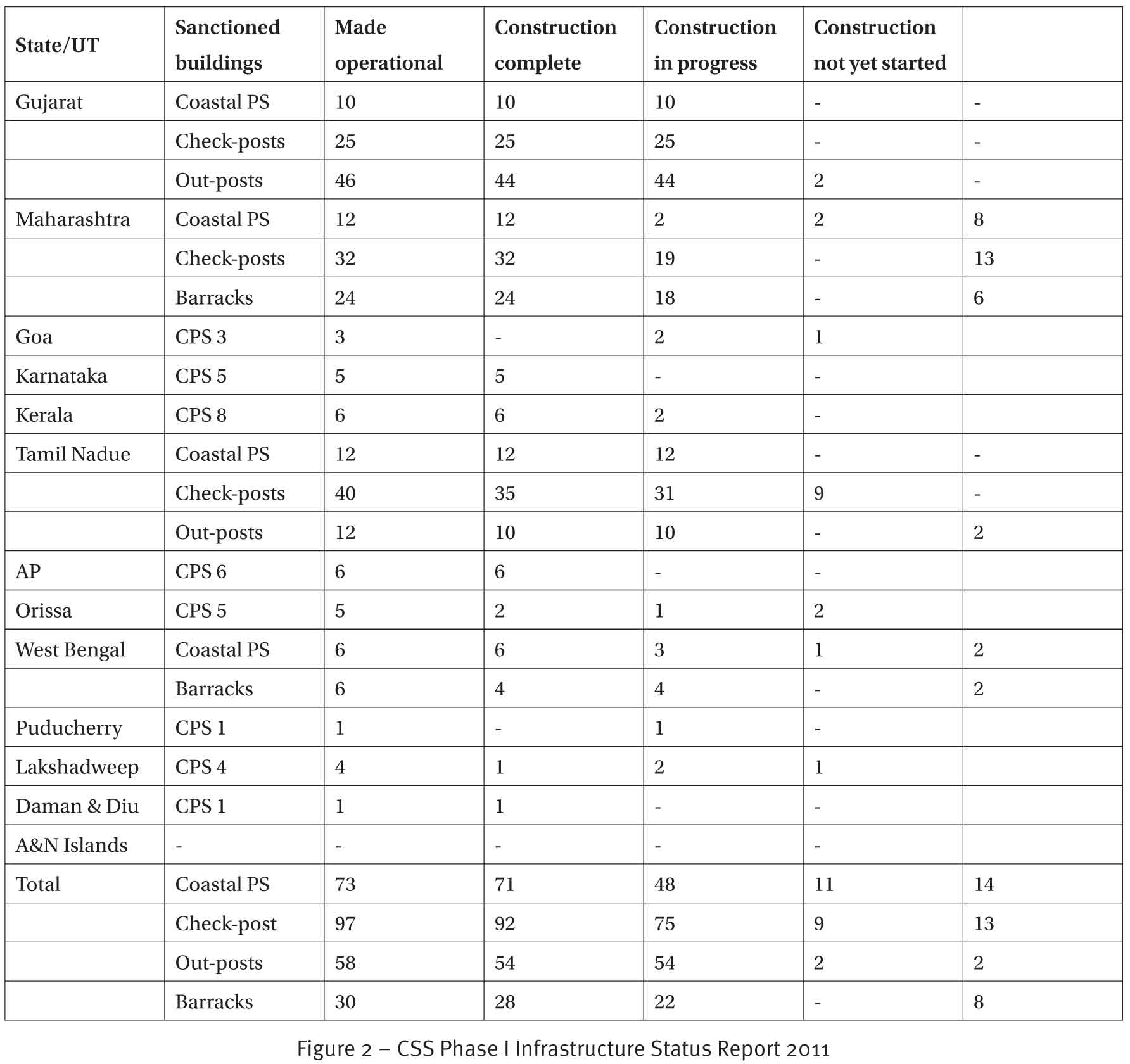 An apex body, the National Committee on Strengthening Maritime and Coastal Security (NCSMCS) against threats from the sea was constituted. The body is chaired by the Cabinet Secretary and its members are all stakeholders such as the Indian Navy, the Indian Coast Guard, the Ministry of Home Affairs (MHA)/Fisheries/Shipping/Surface Transport/Agriculture, DG Light House/Ships and Chief Secretaries of Coastal States. The first meeting was held on September 04, 2009.The NCSMCS, unlike many other such bodies, meets quite regularly.

The present status of the assets of the ICG could be summarised as below:

In 2005, the Coastal Security Scheme 2005 (CSS2005) was sanctioned by the CCS. CSS2005 introduced the concept of a three-layered coastal patrol system between the IN, the ICG and the Coastal Police. The CSS2005 provided for a comprehensive five-year plan with an allocation of Rs 400 crore for non-recurring and Rs 150 crore as annual recurring expenditure for Phase I.

The Navy, as a facilitator, can be nominated as the situational head in the form of the Nodal Agency.

The breakdown of the type of infrastructure sanctioned against CSS Phase I is listed at Figure 1. The status of the infrastructure sanctioned, as of early 2011, is indicated at Figure 2. The MHA report for 2010–2011, accordingly claims that on all India basis – over 92 per cent of the 73 Coastal Police Stations (CPS) sanctioned for the Phase I had been made operational by January 2011. In Maharashtra, it also indicates that, of the twelve CPS sanctioned no construction work had commenced on eight of them.

In mid-2011, when several incidents of ships drifting on to Mumbai beach took place, media reports indicated that the CPSs in Mumbai were no where near ready. There were reports of boats tied up alongside, unable to undertake any patrolling due to lack of fuel supply and inadequate technical manpower. In spite of all the public outrage at the time of the series of episodes, when considered along with the MHA report above, it clearly illustrates the apathy displayed by the state authorities.

The present demarcation of zonal responsibility is as follows:

Activities in respect of the following are also well underway: