**Long Kaifeng is a well-known and widely influential military affairs commentator and who runs his individual blogs on Weibo and sina.com, respectively. He retired as Lt Col from PLAN, China’s navy. He now runs discussion forums and writes syndicate column for a large number of online news platforms and blogs such as China.com, Sohu, Sina, Global.com – all popular military affairs online forums, and has syndicated blogs on China’s biggest online portals including Sina.com, Pheonix.com, Blog.com and Grassroots.com. Besides, Long Kaifeng also runs blogs on popular mobile phone news Apps such as We-Media, Toutiao, Yidian Information, Sohu Client and Pheonix Client. 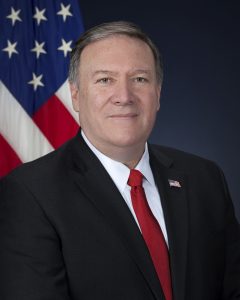 Reuter news agency citing the US State Department reported on September 29, 2020 that the Secretary of State Pompeo will visit Japan, South Korea and Mongolia for five days between   October 4 and October 8.

He report also claimed, Mr. Pompeo will attend the second “Quad” Foreign Ministers’ meet in Tokyo on October 6 (Quadis a group of four nations – the US, Japan, India and Australia).

The purpose of this visit is quite clear from Pompeo’s itinerary, that is, to build encirclement around China in order to contain China. Don’t forget, the sole purpose to visit Mongolia is to try and to wedge a split between China and Mongolia. It is very evident the US leaders like Pompeo have not at all lost appetite for encircling and containing China and that they “will not shed a tear until they see the coffin” (不见棺材不掉泪 Bùjiàn guāncai bù diào lèi) – a Chinese metaphor meaning “refuse to be convinced until one is faced with reality” or they “will not return until they hit the south wall” (不撞南墙不回头 Bù zhuàng nán qiáng bù huítóu) – a Chinese idiom meaning someone who stubbornly insists on one’s own ideas.

On September 29, the Japanese Foreign Minister Motegi Toshimitsu announced Japan will host the next meeting of foreign ministers of Quad countries – the US, Japan, India and Australia – in Tokyo on October 6. The four countries haveformed the Quadrilateral Security Dialogue mechanism in 2019 and the first round of the foreign ministers’ meeting was held on the sidelines of the UN General Assembly session in September 2019.

Quad is the product of vigorous efforts by the US President Donald Trump and Secretary of State Mike Pompeo to bring together the four countries target China. In fact, the other three members of Quad – Japan, India and Australia – have taken full advantage of President Trump’s so-called grand vision of “Indo-Pacific” geopolitical concept and wish to form “Indo-Pacific Strategy” and to create “Free and Open Indo-Pacific.”

To make Quad a regular annual exercise and hold Quad foreign ministers’ meeting every year in order to formulated a well-coordinated strategy;
Quad mechanism has been upgraded to the level of military alliance in the Indo-Pacific region, posing a direct strategic threat to China and Russia;

Quad is aimed at providing full military as well as political support to the US Indo-Pacific strategy and it is an upgraded version of the US “Island Chain Strategy.” The main purpose is China’s containment.

What is the purpose of Pompeo behind visiting Mongolia? The main aim is to sow dissension and create a wedge between Ulaanbataar and Beijing.

Mongolia is a totally landlocked country and enjoys good relations with both China and Russia respectively. The wonderful gesture of gifting 30,000 sheep to China by the Mongol president during his recent visit to Beijing amidst prevailing pandemic conditions is a clear manifestation of the Mongolia-China friendship. Since Mongolia and China are good friends, therefore Pompeo’s visit to Ulaanbataar is intentionally included in the itinerary with a malicious design to create “divorce” between Beijing and Ulaanbataar on one hand, and shrewdly use this “divorce” create a wedge between Sino-Russian ties. This is Popmpeo’s routine business.

This is exactly how the US played India. India’s membership into the SCO and its good relations with Moscow, led the US to push India towards causing border conflict with China. The US further used this in launching a public opinion offensive against China-Russia relations. Had China not been alert and had there been lack of perfect coordination between Beijing and Moscow, the US nearly got away with tricking Russia in its manipulation game.

The author is of the opinion, though Indo-Pacific is a brilliant idea but it is too ambitious to get translated into reality. For the following three factors:

First, the US alone does not have the wherewithal to alone carry out its China containment policy. This is because the US national strength is inadequate to alone implement the Indo-Pacific strategy. With the Island Chain Strategy in doldrums, to talk of the Indo-Pacific strategy is nothing but hypocritical. The US thinks it is in its national strategic interests to carry out China containment policy, and not so much in the strategic interests of either Japan or India or Australia. Like it or not, the Japanese and Indian markets and growth are still closely linked with China.

Therefore it is for the United States to be in the forefront of implementing China containment policy. Hence, it is going to be the United States which will not only expend more of its national strength, but it is also going to be the US which is bound to lose on its national capabilities as well as see its dominance take a nosedive. Both the US national power and its hegemony will be hit.

Second, if Japan, India and Australia – which is most likely going to be the case – are unwilling to directly confront China, then the existence of Quad will remain in name only.

It is true there are certain outstanding strategic contradictions and even conflicts between Japan and China and India and China respectively. But at the same, what is also true is both Japan and India are unwilling to rush to the frontline of directly confronting China. This is because they have suffered nationally as a result of a direct confrontation with China. In 1962, India had suffered national humiliation in direct confrontation with China. Therefore, India is extremely cautious this time. Notwithstanding India’s massive military build up and purchase of foreign defence equipments, India is exercising great caution so as to not experience another failure.

Japan is both more canny and cunning in making full use of a direct confrontation between the US and China. Because Japan is well aware the US cannot have the cake and eat it too. Although this is exactly what Japan achieved at the cost of the United States in the Korean War. As regards Australia, it (Australia) is too weak to protect itself and stand up to China.

Third, China’s military power is sufficient enough to strike at the US and at least capable to destroy the US Island Chain Strategy.

China’s wherewithal today is capable of striking a deadly blow to the US Island Chain Strategy 2.0 (i.e. Indo-Pacific strategy). Therefore the battlefield within the “2nd Island Chain Strategy” is a controllable battlefield. As long as we are able to liberate Taiwan and achieve national reunification, we can easily strike at the roots of the US Indo-Pacific strategy and give a massive blow to the US Island Chain strategy and seize the initiative into our hands from the US dominance in the Indo-Pacific.

Therefore, if the US decides to go ahead and push forward the Indo-Pacific strategy, China will have no option but to pre-empt the liberation of Taiwan and realize China’s goal of national reunification and break free from the US policy of encirclement.