In 2010, China expressed its discontent byrecalling one of its Panda Tai Shan from United States after US provided €4.6 billion weapons assistance package to Taiwan. This was further catalysed with the visit of pro Tibet leader Dalai Lama to Washington.[1] This reflects the significance of Panda in Chinese diplomacy. However, this was not the first time when Panda was involved in any diplomatic engagement by China. Mao Zedong, in fact, used Panda in getting into any diplomatic discussions during his time.The Chinese national animal; Panda has been a key representative of the Chinese diplomacy due to its rarity and cultural relevance since the Cold War. Wat does this imply? What is the significance of Panda in Chinese Diplomacy? Is it just symbolic or does it holds a significance?

Historically, gifting (later, loaning) Panda has been a sign of Chinese trust with the country receiving the Panda. During the Tang Dynasty, Empress Wu Zetian had sent two Panda bears to Japan as a gift. In fact, Mao Zedong, during the Cold War, gifted two Panda to China’s communist allies, Soviet Union and North Korea. UK and United States were receiver of Panda as a goodwill gesture in order to emphasise political closeness with both nations in the 70s. However, soon after criticism by NGOs and organisations working for the conservation of the natural wildlife, China openly started loaning Panda in exchange of a hefty amount to very selected countries. This could may be a reason for Panda being loaned only to developed countries in the west and very selective countries in the east with which China has very special economic ties.

Loaning Panda is attributed to the concept of Guanxi, (关系) the importance of keeping a good relationship. It is once the relationship and partnership between China and any nation is consolidated, that country can be considered to receive a panda. From a Chinese perspective, Kung Fu Panda is symbolic to rising China where Panda displays essence of kindness and Kung Fu stands for China’s solid determination and strength to protect its legitimate rights and interests.[2] However, in contrast to Joseph Nye’s definition of ‘Soft Power’ which is basically power of attraction and persuasion, on one side, China is surely garnering global attention but, at the same time it is relating to ideas like ‘Kung Fu’ with Pandas speaks a lot about China’s inclination towards hard power in present times. [3] The Chinese investment is impressively large when it comes to Panda initiatives. In coming years, China plans to invest 10 billion Yuan ($1.58 billion) to build a Giant Panda National Park to help the endangered animals.[4] In August 2013, China Network Television (CNTV) under the China Central Television State Administration of Radio, Film, and Television launched ‘iPanda’ in collaboration with Chengdu Research Base of Giant Panda Breeding and China Conservation and Research Center for the Giant Panda. This initiative extends across all popular social media platform and its contents are quite engaging to its users. As a matter of fact, rarity has made Panda a lucrative business around the world.

When it comes to loaning Panda, China is very selective. According to a study by Oxford University study in 2013, published in the journal of Environmental Practice, Panda loans were granted to countries which have signed Free Trade Agreements (FTA) with China, or to nations supplying China with natural resources and advanced technologies.[5] Evidently, gifting Panda has become an epitome of ties in modern Chinese diplomacy where any Panda loans are given to any country in presence of national leaders from both sides when any bilateral agreement is signed. However, the receiver country benefits only in terms of attractions of tourists nearby them. Hefty loans plus the maintenance of Panda zoo makes it an extortionate affair.[6] Goodwill gesture signed upon bilateral agreements could be a possible reason for obliging to such costly affairs.  The graph below shows the status of Free Trade Agreement (FTA) of China with other countries and status of Panda loan, if any. Presently, only 18 countries have received Panda as goodwill gesture. Interesting to note that the offspring born to loan Pandas in the foreign countries are property of China and the keeper state has to pay an additional amount per offspring in order to keep them. 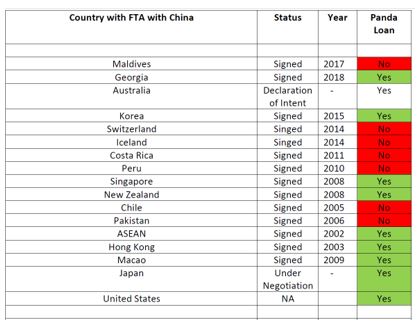 (Source: Tabulated by the author)

It is quite striking to note that even a decent economic tie with China does not necessarily amount to Panda loan. According to a paper published by Oxford University, ‘’Being among the nations with which China trades but does not potentially deem technically sufficiently developed to receivea panda places country such as India, Pakistan,Chile, Peru, and Costa Rica in a different club”. This explains lot of Chinese perception of India’s technical and infrastructural capacity.Climatic factor cannot be a listed as reason for not giving Panda to India as northern part of India has well suited climatic requirements for Panda to live. Even heavy investments by China in Africa have not yet seen any light of any Panda loans, knowing the fact that this region may not be suitable for Panda to survive.

Being highly selective in nature, China has extended Panda loans to Nordic countries where China has adequate economic as well as other bilateral ties such as presence of many Confucius Institutes in the region. Same is with United States, where both countries have humongous economic and trade relation. 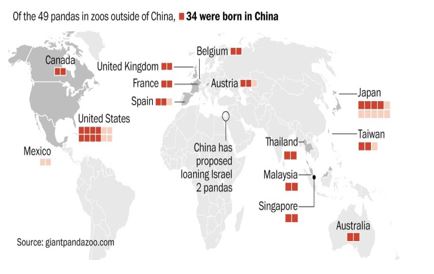 China has often been identified as a symbol of Dragon as it is seen as a symbol of power, domination and strength. However, In contrast, today, mighty China has strategically chosen Panda as its symbolic as well as unofficial diplomatic representative. Having Panda as Chinese symbol would give China as softer image globally and in addition, any Panda, anywhere in this world would directly connect to Chinese land, the only land it belongs to.

For China, Panda is no more than just a symbol of wildlife conservation but a mix of economic, social and cultural diplomacy where only China does what it wishes to. The Chinese effort for conservation of Panda has been brought under severe criticism where it seems that Panda has more political importance in conservation than the other endangered wild animals in China. [7]However, irrespective of all criticism centred around Panda, Chinese efforts to portray Panda as its tool for diplomacy and soft power is evident and successful with wide popularity of Panda globally.