As part of the sweeping military reforms that were initiated in 2015, China is considerably reducing the number of personnel in the PLA to become a leaner, more efficient force. The total PLA personnel was about 2.3 million before a cut of 300,000 troops announced in 2015 was completed by 2017.[i]  The PLA Army cut about 850,000 combat troops in 2013.[ii] In 2017, it was declared that the PLA Army would be reduced to less than a million[iii] from the existing 1.55 million[iv], increasing manpower resources for other forces. Apart from growing global ambition, this article argues that the changing demographic profile of the country plays a role in this decision.

Implemented for over thirty years, the One Child policy has had a significant impact on the demographic profile of the China. 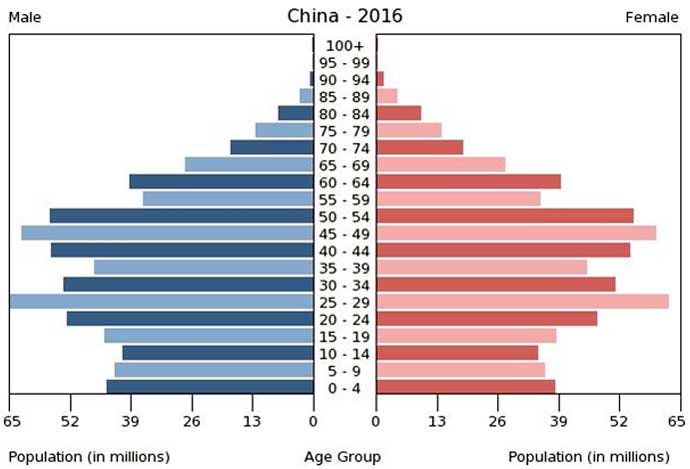 Two major trends can be observed from the population graph above. First, the dependency ratio in the country is artifically high. The aging population and the shrinking labour force is a burden in 4:2:1 families ie families where the parents are also single children.[v] Secondly, the sex ratio is highly skewed, especially among the younger generations. The preference for a male heir, especially in the rural areas where the concept of maintaining the family bloodline through males is strong, has resulted in sex selection or abandonment of girl children. Among the 0-14 years age group, the ratio is 117 males for every 100 females while the ratio stands at 114 to 100 among the 15-24 years age group.[vi] The global average at birth is 107 males for every 100 females. This has resulted in a population bulge, with a large number of young, unmarried men who are likely to stay unmarried.

Even though it has been easing the policy since 2013 when it allowed couples to have two children if both the parents were single children,[vii]the effects of aggressive family planning policy will last for at least two generations. Further, due to the high cost of raising a child in China today and the higher number of dependents that a young couple has, many will choose to have only one child.[viii]

The younger generation in China today is financially responsible for a much larger number of dependents than the norm. Today, China has 16 retirees per 100 workers.[ix] This number is projected to rise to a phenomenal 64 retirees per 100 workers by 2050[x]. China does not have a strong social security or retirement benefits system, and retirees are entirely dependent on personal savings or their children.[xi]

PLA soldiers can broadly be divided into two pools, conscripts (yiwubing) and volunteers (zhiyuanbing).[xii]In recognition of the economic responsibility of single children, the short service commission for a conscript was shortened to two years in 1998.[xiii]The conscripts are recruited according to quotas levied upon local governments based on their population percentage. While China’s “Conscription Work Regulations do state that persons who are the sole support of the family may be deferred for service, in practice, China only has a population of single children to recruit from and these rules are ignored. A soldier takes time to adjust to the tough training routine, unit culture and military environment.[xiv] Therefore, even the numbers that China is left with do not reflect battle ready soldiers.

The rural –urban divide in China also gets reflected in the military. Due to the population and education imbalance, rural youth with relatively lower education form a much larger portion of the recruits. They are ill equipped to handle the advanced technology that PLA is slowly becoming reliant on.

After the two year period, a certain number of conscripts are chosen to voluntarily extend their period of service to become non-commissioned officers (shiguan).[xv]Single children are more likely to move to the private sector due to economic compulsions instead of extending their term in the relatively low paid army. The PLA has recognized the limitations of its conscript pool and is slowly moving towards increasing NCOs while reducing the conscripts. It is attempting to attract educated youth with technical backgrounds as NCOs but due to the lack of attractive pay, educated youth, especially urban residents with a higher cost of living prefer the private sector.

Xi Jinping’s anti-corruption drive has cracked down on the business earnings that a unit had earlier, a useful supplement to the salaries of officers at a time when economic growth has led to a rise in the cost of living.[xvi]

Another unplanned consequence has been the fundamental change in the psychological make up of single children. They have been dubbed as ‘little emperors’ due to the excessive attention they receive from their granparents and parents. Scientific studies show that single children born after the implementation of the forced planning policy were less altruistic and trusting, more timid, less competitive, more pessimistic and less conscientious than the Chinese who were born just before the policy.[xvii]

While scientific studies do have their inherent limitations, there have also been general observations by commanders and isolated newspaper reports indicating a larger problem.

The PLA has found that while single children have better communication and computer skills than their peers with siblings, they are not as tough, they do not like intense training; they call in sick more frequently; and they struggle to perform some simple chores like doing their own laundry.[xviii] Isolated incidents like listening to music while in combat practice which requires long periods of staying alert indicate that the fighting capability of such troops remains a strategic concern for PLA commanders. For instance, the PLA army has devised special training for “spoiled boys and girls” to strengthen its fighting capability in the past years.[xix]

Despite the reduction in numbers, China continues to maintain the world’s largest military force. However, numbers alone do not reflect battle preparedness. The limitations in human resources could be the weak link in the military modernization process. China’s dependency problem is only set to intensify over the next few decades, a timeline that coincides with the Chinese ambitions of becoming a global power. The task of building a technologically advanced, motivated army to complement its advance in military technology will remain an uphill battle.

[ix] Kyle Mizokami, ‘Why the Chinese Military is Only a Paper Dragon’, 24 September 2014, The Week, Available at http://theweek.com/articles/445300/why-chinese-military-only-paper-dragon, Accessed on 20 December 2017.

is a Research Assistant at the Centre for Land Warfare Studies (CLAWS), New Delhi.