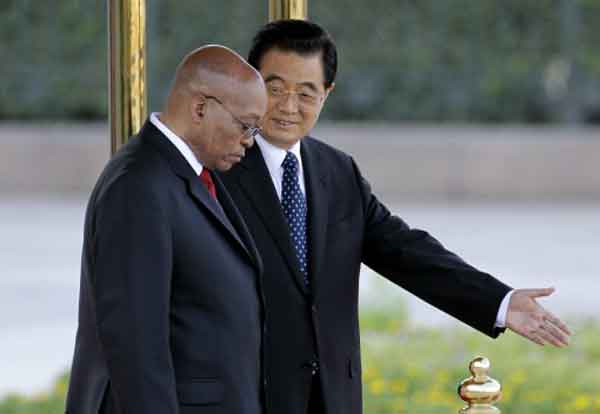 Call it China’s new military diplomacy or birth traits of its emerging naval strategy, a Chinese naval fleet arrived in the Gulf of Aden off Somalia on 6 January, 2009 to carry out the first escort mission against pirates. In an efficient display of its growing naval operational capabilities, the fleet completed its twenty first mission (the largest held so far in the series) of escorting merchant ships in this region on 18 February, 2009.  Ten Chinese merchant ships were convoyed while three foreign ones, including Hermione from Germany, Viking Crux from Singapore and Princess Nataly from Cyprus, who requested protection, were escorted by the Chinese fleet. The fleet had left sail from a port in Sanya city of China’s southern-most island province of Hainan on 26 December, 2008. The fleet comprises two destroyers (Haikou and DDG-169 Wuhan) and a supply ship (Weishanhu) from the South China Sea Fleet. The fleet carried about 800 crew members, including 70 soldiers from the Navy’s special force, and was equipped with ship-bourne missiles and light weapons.

China has gained enough experience in long distance naval force deployment due its frequent military exchanges with other countries. The logistics problem of supply and refueling was seen no more as a constraint.

It is worthwhile to explore  this issue given the implications this would have for India and the Chinese motivation behind this decision to conduct naval operations far away from the mainland for the first time in 500 years. There seems a general consensus among many Chinese military and non-military experts that it was in China’s favor to project a force far away from its shores. Firstly, China has gained enough experience in long distance naval force deployment due its frequent military exchanges with other countries. The logistics problem of supply and refueling was seen no more as a constraint. The fleet, while on its way to the Somalian coast, displayed its supply and refueling capability as it entered the India Ocean at the Malacca Straits. The supply ship Weishanhu refueled the two destroyers with several hundred tons of oil, an operation that an official for the fleet support described as “highly efficient”.

The fact that two Chinese ships, a fishing vessel and a Hong Kong flag ship with a 25-member crew, were seized by Somalia pirates in October 2008 do not qualify as potential reasons for this long distance naval deployment. These hijacks occurred off the Kenyan coastline, and the total number of hijacks of Chinese vessels so far constitutes only 0.7 percent of the total passages. Therefore the decision may involve other factors apart from one involving immediate Chinese interest. Prior to deployment, China explicitly believed that any action in the Gulf of Aden must be carried on within the “United Nations Framework”. In his address to the UN on 16 December, 2008 the Vice Foreign Minister said: “China is seriously considering sending naval ships to the Gulf of Aden and waters off the Somali coast for escorting operations in the near future.” The minister also added that it appreciated the efforts made by other navies to curb the problem of piracy. This needs to be contrasted with the Chinese government’s stand on growing intervention based military strategies.

The China Defence White Paper, 2000 stated that the UN role in securing international peace was on decline because of unilateral actions taken by some countries outside the United Nations Security Council framework (eg. Yugoslavia). In the same address to the UN (mentioned above) the Vice Foreign Minister said that the UN should also attempt to resolve the root causes of piracy in Somalia. The Chinese believe that piracy is the direct consequence of the domestic politico-military-economic condition within Somalia. The transitional federal government in place in Somalia worked up the power ladder with US support and displaced the Islamic Courts Union (ICU) which still holds huge mass support, especially in Southern Somalia. This is indicative of the US efforts on its war against terrorism.

As a leading importer of crude oil, China depends on 25 percent of this import from Africa. This is projected to up to 40 percent by 2020.

Further, in the absence of multilateral operations under the UN, Somalia may at future point become a case for unilateral intervention by the US or Britain or both. Therefore piracy seems to be only the tip of the iceberg. However, Chinese behavior is inconsistent with its political rhetoric at least at a practical level. On 24 June, 2007 the Chinese oil company, C.N.O.O.P singned a deal with Somali President Abdullah Yusuf to explore the northern puntland region for oil. This deal was signed in a hurry prior to the Somali government framing National Oil Rules (NOR). Chinese firms backed by its government seem to be willing to take economic and political risks which western firms would shy away from. A unilateral military action by western powers would effect Chinese equations in the region. Like the anti-satellite missile tests in early January 2007, China seems to project its capabilities as part of its extending diplomacy without breaking any rules.

China, which became a permanent member of UN Security Council only in 1971, did not engage in peace-keeping operations until 1989. In 1989, China began its first exploratory foray into UN peacekeeping missions, sending non-military observers to join the UN Namibia Transitional Period Aid Group overseeing a general election. In 1990, China dispatched military observers to the Middle East in support of the UN Truce Supervision Organization (UNTSO). One reason for this transition was the incident of Tiananmen Square, when the People’s Liberation Army was caught on the wrong foot with its own people. This incident stimulated the need for the PLA to conduct more people oriented activities such as disaster relief, domestic security, and other measures, but also, very importantly, participation in UN peacekeeping operations. This transition now makes China the largest contributor by a permanent member of the UN Security Council (in close competition with France). The second reason is the PRC’s concern for sovereignty and its liquidation by interventions. China was un-supportive of the blue helmet due to its national experience. During the entire Cold War, United Nations sanctioned the use of force only once. The target nation of this decision was China herself (Korean War). With the Cold War world order shaking and reshaping in this era of intense economic interdependence, China’s concern seems to be reorienting. The third reason could be the Chinese concerns for Taiwan, Tibet and Xinjiang, which if left uncontrolled could become cases for intervention. [It may be worthwhile to explore this aspect a little more in terms of other factors that have led to China’s engagement in peacekeeping missions.]

Another important motivation behind the decision to deploy the Chinese naval force off Somalia could be the fact that this involves the African continent if not directly. Chinese leaders have been frequenting Africa since 2000. As a leading importer of crude oil, China depends on 25 percent of this import from Africa. This is projected to up to 40 percent by 2020. It has extensive debt packages given to Africa on a no fringe attached basis and its bilateral trade is expected to touch $ 100 billion by 2010. Suffice to say that its stakes and advantages in Africa are high. The overall expected output on oil by a Chinese firm in Africa is 78 million tons (presently the output is 40.3 million tons). China also depends on Saudi Arabia for its crude oil imports and has huge markets in Europe. Chinese merchant ships will have to necessarily frequent the Gulf.

With limited power or force projection capability, Chinese action is consistent with its overall policy strategy of creating an international order that is different to the Cold War order. Securing international peace and development is currently an objective of it foreign policy. This international environment will only help China in achieving its strategic and development goals. It will enhance its image as a responsible power in the 21st century and give it the experience to conduct operations of this nature.

A few decades back while articulating over new ways to use the National Defence Force, Deng Xiaoping’s strategic thought mentioned that “…when our country is developed and more prosperous, we shall have a bigger role to play in the world”. After almost three decades this seems to be coming true.