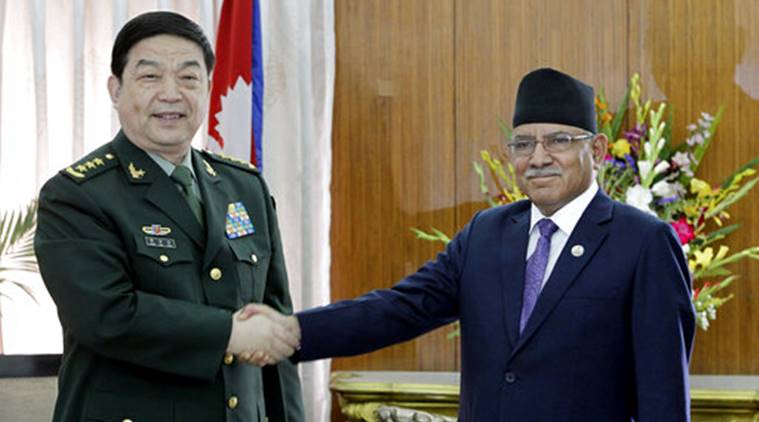 The Chinese Defence Minister and State Councillor General Chang Wanquan undertook a three-day official visit to Kathmandu from March 23 to 25, 2017. Chang led a 19-member high-level military delegation to both Sri Lanka and Nepal. During his sojourn in Nepal, he met President Bidhya Devi Bhandari, Prime Minister Pushpa Kamal Dahal, Deputy Prime Minister and Home Minister Bimalendra Nidhi, Defence Minister Bal Krishna Khand, and Chief of Army Staff General Rajendra Chhetri. The visit saw China offer a grant assistance of USD 32.3 million to the Nepal Army (NA) for the purpose of strengthening its capacity to deal with natural calamities and providing it equipment for United Nations peacekeeping missions in high conflict zones. The latest grant is ten times higher than China’s previous military assistance to the NA in the post-Monarchy period. The visiting delegation also discussed holding the first ever military exercises by the armies of the two countries.

Chang’s visit occurred just a day before Prachanda’s scheduled visit to China. More importantly, it occurred amidst Nepal’s continuing political turmoil. The government is struggling to implement the new constitution. Anti-constitution forces have decided to boycott local level elections scheduled for May 2017. The state has failed to give justice to wartime victims despite setting up the Truth and Reconciliation Commission. Large numbers of former Maoist combatants are dissatisfied with the rehabilitation programmes. A section of youth under the Alliance for Independent Madhesh (AIM), a Terai based outfit, has vowed to undertake an armed struggle due to injustice meted out to the marginalized groups. At the same time, the Army is gradually emerging as an alternative to political parties which have miserably failed to provide political stability. The entire peace process, started in 2006, now faces a threat of collapse.

Chang’s is the first defence ministerial visit since the two countries established diplomatic relations in 1955. The visit is part of China’s new policy towards Nepal in the post-monarchy period. During this period, China has been sending high-level delegations – political, diplomatic, security, business and media – at regular intervals. The purposes of these visits have been to: seek reassurance from successive governments about continuing the ‘one china policy’; search for a reliable political partner; explore possibilities for spreading Chinese soft power; and, assess the presence of external powers.

The prolonged political turmoil in Nepal (nine Prime Ministers in the last 10 years) has unnerved China about threats from Tibetan separatists. In the absence of a reliable and trustworthy government in Kathmandu, China has expanded its engagement from the earlier state-to-state level to institutional as well as people-to-people levels. Under the institutional level, to ensure quick and effective responses to control anti-China activities, China has targeted the bureaucracy and the Armed Police Force (APF) which guards the Nepal-China border. In this regard, during State Councillor Yang Jiechi’s visit to Kathmandu in June 2013, China pledged to provide NPR 3.6 billion in assistance for the construction of the APF training academy at Matatirtha in Kathmandu. China also increased the number of seats and scholarships in its various training colleges for Nepali bureaucrats as well as at its National Defence University for Nepali police officers. It has also supported joint exercises with the Nepal Armed police in Tibet.

In the second phase, under the comprehensive strategic partnership programme, China attempted to deepen military cooperation with the Nepal Army (NA), which has been traditionally close to the Indian and US Armies. The first military cooperation between the NA and PLA began in the post-monarchy period when the then Defence Minister of Nepal Ram Bahadur Thapa signed an agreement in Kathmandu in December 2008 for military assistance worth USD 2.6 million from China for the modernization of the NA. Subsequently, during the Chinese Army Chief General Chen Bingde’s visit to Nepal in 2011, China signed an agreement for providing military aid to the tune of USD 7.7 million to the NA. Besides, China has increased the number of war college seats for NA officers. The current ratio of Chinese to Nepalese Army personnel in China’s War College short term training programmes could be around 4:1. During the training period, China arranges trips for Nepali officials to various parts of the country to provide them first-hand knowledge about modern China. As a result, China has over a period of time created a constituency within the NA. Some senior officers of the NA argue in favour of deeper military cooperation with China to reap more benefits. This kind of thinking has gathered momentum after India’s silence over the border blockade by agitating Madhesi groups in 2015. For its part, China also feels that democratic institutions in Nepal have failed to provide a stable political system.

Most importantly, due to the prolonged political transition, there is a growing perception among common Nepalese that the NA could save Nepal from the present political crisis. Certain sections in Kathmandu argue in favour of adopting the ‘Bangladesh model’ to restore political stability. As a result, the NA has become an attractive institution for external powers. For example, just before the Chinese Defence Minister’s visit, the Sri Lankan Army Chief visited Kathmandu. And immediately after that the USPACOM chief was in Kathmandu. India’s Chief of Army Staff visited Kathmandu after Chinese Defence Minister’s visit.

The Chinese Defence Minister’s visit was very timely in that it occurred at a time when China is pushing for MoUs on OBOR with three of India’s neighbours – Nepal, Sri Lanka and Bangladesh – and has upgraded its relationship with these countries to the level of ‘Strategic Partnership’. Sections of the Chinese media have of late indicated that these countries have until now been cold to OBOR due to some amount of pressure from India. Nepal has expressed its support for OBOR only in principle. China has already invested in multiple OBOR-related infrastructure projects in Sri Lanka, Nepal and Bangladesh. It has agreed in principle to build railways and road connectivity to Nepal under OBOR. It has been an important source of foreign direct investment (FDI) in Nepal since 2013 and has offered the second largest official development assistance (ODA) to Nepal after Britain during the same period. China also recently declared an investment of USD 8.3 billion at the Nepal Investment Conclave 2017 held in Kathmandu. Moreover, over a period of time, China has extensively utilized its soft power in SAARC countries. Its economic engagement – soft-loans, business investments and ODA –has been a dominant component to influence the behaviours of countries surrounding India.

In addition, Chinese soft power components like culture, polity, higher education and technology have also become popular in SAARC countries. For example, in Nepal, Chinese Confucianism and language have been gaining in popularity amongst the youth. China has established Confucius institutions and China Study centres in universities, colleges and schools. More than 100 Nepali schools offer free Chinese language courses. Chinese language tattoos and mobiles are very popular amongst the Nepali youth. A large number of youth prefer to go to Chinese universities for higher studies.

In terms of foreign policy, a large number of Nepalis view China as a benign neighbour that does not interfere in Nepal’s internal affairs. The favourable view of China has only increased due to Nepal’s admission as a member of AIIB and grant of dialogue partner status in the Shanghai Cooperation Organisation. There is also a perception that China, a permanent member of the UN Security Council, could support the interests of a small and landlocked country like Nepal.

In the wake of the upgradation of its relations with Bangladesh, Nepal and Sri Lanka to strategic partnerships and its deepening economic engagement with these countries, China perhaps wants to deepen military cooperation as well to provide security for its business operations, maritime silk route and OBOR projects. Since the signing of a defence cooperation agreement with Bangladesh in 2002, China has become a reliable and affordable source of weapons for Bangladeshi security forces. China may be looking to foster similar arrangements with Sri Lanka and Nepal as well. Chang’s visits to Nepal and Sri Lanka is only likely to further such a development.

One thought on “China’s Growing Military Ties with Nepal”