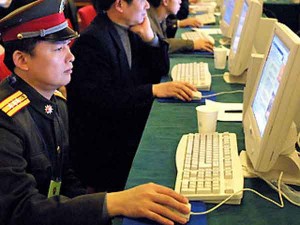 “Chinese cyber spies hack Indian embassy in US,” screamed a bold headline splashed across the front page of a leading national daily on March 30, 2009.1 Based on a research brief issued by the Toronto-based Munk Centre for International Studies, the news report stated: “A vast electronic spying operation from China has infiltrated computers and stolen documents from hundreds of government and private offices around the world, including those of the Indian embassy in the US…” It was reported that the operation “was being controlled from computers based almost exclusively in China.” Several other Indian newspapers carried similar reports.

Earlier it had been reported that the Chinese army uses more than 10,000 “cyber warriors” with degrees in information technology to maintain an e-vigil on China’s borders: “With a vast pool of IT-trained officers in place, China’s border vigil is turning electronic. At its long border with 14 countries, including India, the Chinese soldiers now swipe cards and work on laptops as they monitor the border with great efficiency with electronic sentinels functioning 24 hours a day along the sea and land boundaries while sentries work with IC cards and other sophisticated equipment. The use of electronic devices has enhanced the army’s ability to deal with emergencies quickly and efficiently…”2 While information about the People’s Liberation Army’s (PLA) cyber warriors have begun to appear in the public domain only recently, PLA watchers across the world have known for long about China’s well conceived doctrine on information operations and cyberwar. China’s cyberwar doctrine is designed to level the playing field in a future war with better equipped Western armed forces that rely on Revolution in Military Affairs (RMA) technologies and enjoy immense superiority in terms of weapons platforms and intelligence, surveillance and reconnaissance (ISR) and command and control networks.

China’s cyberwar doctrine is designed to level the playing field in a future war with better equipped Western armed forces.

Early in the first decade of the new century, the Central Military Commission (CMC) called for a detailed study of the concept of people’s war under conditions of informationization. Describing the new concept, Ka Po Ng, an associate professor at Aichi Bunkyo University, Japan, has written:3 “…what the PLA is prepared to fight is a people’s war in the form of a ‘local war under high-tech conditions’ with increasing attention to the application of information technology.” Since then China has spent a lot of time and effort in assessing the implications of information technology and knowledge-based warfare on the modern battlefield and to applying the lessons to its own war concepts.

The PLA expects to fight the next war under conditions of what it calls “informationization” or “informationalization”.4 In the White Paper on National Defence issued in 2004, informationization was explained only in general terms, but bears repeating: “To adapt itself to the changes both in the international strategic situation and the national security environment and rise to the challenges presented by the RMA worldwide, China adheres to the military strategy of active defense and works to speed up the RMA with Chinese characteristics:5

China’s new doctrine and the strategy and tactics associated with it have been influenced by the lessons of Gulf War I in 1991 and the Iraq War of 2003, both of which have been extensively studied by Chinese scholars.

PLA analysts have called the ongoing RMA an “informationized military revolution”.6 It emerges that informationization “clearly relates to the PLA’s ability to adopt information technologies to command, intelligence, training and weapon systems. This would include broad investment in new automatic command systems linked by fibre-optic Internet, satellite and new high-frequency digital radio systems. The PLA can also contest the information battle space with its new space-based, airborne, naval and ground-based surveillance and intelligence gathering systems and its new anti-satellite, anti-radar, electronic warfare and information warfare systems. There is increasing ‘information content’ for new PLA weapons as it moves to link new space, airborne and ELINT sensors to missile, air, naval and ground-based ‘shooters’ to enable all its services to better use new precision-strike weapons.”7 According to the 2004 White Paper, “In its modernization drive, the PLA takes informationalization as its orientation and strategic focus.” The PLA has adopted what it calls a “double historical mission” and a “leapfrog development strategy” – accelerating military informationization while undergoing mechanization.8

The denial of information, strategic deception and the achievement of psychological surprise have for long been an integral part of Chinese military doctrine. The Chinese find information warfare (IW) extremely attractive as they view it as an asymmetric tool that will enable them to overcome their relative backwardness in military hardware. The Chinese are devoting considerable time and energy to perfecting the techniques of IW to target the rapidly modernizing Western armed forces that are becoming increasingly more dependent on the software that runs computer networks and modern communications. In Chinese thinking, IW presents a level playing field for projecting power and prevailing upon the adversary in future wars. However, it has not been possible to ascertain from open public sources whether IW is fully integrated with the doctrine of people’s war under modern conditions or if it is still treated as a separate but complementary pattern of war (zhanzheng xingtai).