China tightens stranglehold of the sub-continent 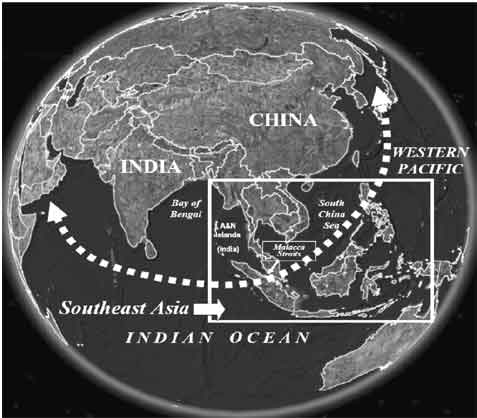 Beijing’s game plan in the Indian sub-continent is now an open book. The term ‘string of pearls’ coined by US geopolitical researchers in 2004,refers to the network of Chinese military and commercial facilities and relationships along its sea lines of communication, which extend from the Chinese mainland to Port Sudan in the Horn of Africa. The Chinese expansionists might have solaced our adversaries in the neighbourhood, . but events have move too fast in the region which will give new meaning and content to the phrase of ‘string of pearls’.

A bizarre rumour is making rounds in political circles in Pakistan that PLA battalions will be landing in Pakistan any time.  Reports are that China has been insisting on Islamabad to hone its military presence in the sensitive province of Baluchistan as also at other sites where the Chinese are at work.

This stipulation reflects two things. Either Pakistani security personnel are incapable of providing the desired security to the Chinese workers or that the Chinese look at Pak security with suspicion. In either case the situation is hopeless for both, the Pakistanis and he Chinese.

It is reported that Pakistan has permitted handing over of Thar coal mines to the Chinese company. Given the widespread animus of the Baluch against the Chinese whom they consider more ruthless plunderers than the Punjabi corporate, the Chinese are reported to establish a strong and effective military base in the proximity of identified coal fields. Baluchistan is rich in minerals and China eyes it. Islamabad is said to have given its nod.

Why does China muddle in the affairs of the smaller countries around India and how? China knows that these developing countries do not have adequate resources and manpower to aspire for mega developmental projects yielding rapid results. Therefore, she has devised the lavish policy of giving loans called ‘debt-trap’ (coined by Brahma Chellaney in 2017) to allure the compliant regimes. We pity the disastrous consequences of Chinese lavish debt-trap policy in Nepal, Sri Lanka, Maldives and Pakistan. Beijing underscores vastly ambitious plans that attract the acquiescent neighbours.  Then it opens the door of the debt-trap into which the regimes easily run. When all is done, Chine lets the cat out of the bag.

The same applies to the Thar coal mine project. The Punjabi hegemons expect a windfall from these mines but are wary whether to provide security to the Chinese skilled labour force to be deployed for the execution of the projects. There have been numerous attacks of Baluch Liberation Army on the Chinese workers in Baluchistan and Sind in which there were casualties. One attack on the Chinese Consulate was owned by the BLA.

What can be the consequences of Pakistan permitting the Chinese to establish military bases in some parts of Pakistan but Baluchistan, Sind and KP in particular? This will certainly forge unity among the resistance forces in all the three provinces for the common cause of throwing out China from   Pakistan and destabilising the Punjabi hegemony.

The ground situation in Pakistan may be as it is, the real reason of raking up the question of deployment of Chinese military in Pakistan has a different reason at it bottom. It is a well-considered plan of Chinese and Pakistaniintelligence agencies to give hype to the rumours of China landing its troops in Pakistan. We shall analyse it.

Firstly, there is a massive anti-Pakistan agitation in PoK. The 13 August event in which millions of people came out on street in all the ten districts of PoK raising the slogan of fight against Pakistan army for freedom and people will shed their last drop of blood for liberation from the yoke of Pakistan. Pakistan army was deployed to obstruct the ocean of humanity but on seeing the indomitable spirit of the people, the army withdrew and disappeared. The CPEC passes through PoK and China understands how fragile her project appears. There appears a plan with full agreement of Islamabad to destroy the opposition in both places, Baluchistan and PoK. Resentment is also openly evident in Gilgit Baltistan.

Secondly, the liquidation of Al Zawahari by the missile attack of an American drone has shattered the trust of PoK people in Pakistan army. It repeated its game against Osama bin Laden.  The same treacherous army is brandishing its sword on the people and the government of PoK. They know that General Bajwa now on a visit to London, is trying to mollify former Prime Minister Nawaz Sharif promising him to get the ban on his election removed and help his party to win the general election provided he is given three years of extension!! This bargaining has encouraged the masses of people in PoK to rise against the army and the Pak regime that wants integration of PoK into the beggar state of Pakistan through constitutional fraud.

Last but not the least is the India factor. In 1994, the Indian Parliamentunanimously passed a resolution on PoK stating that it is a part of the Indian Union illegally occupied by Pakistan. India has the will and power to take it back at proper time. The recent warning of the Indian Defence Minister to Pakistan that PoK was, is and shall remain integral part of the Indian Union stems from the unanimous resolution referred to in foregone lines. This message of the Indian Defence Minister has shaken the entire Pakistani regime and the dissidents are now waiting when India will move on the ground. Incidentally on 14 August, the Independence Day of Pakistan, Indian flag was hoisted by students and staff of NishtarMedical University, Multan in Pakistan and the people of PoK observed it a black day and shut down the shutters of their shops.Though oft repeated,recently too the Pakistani Prime MinisterShehbaghSherif has expressed desire for normalising relations with India, what is the motive behind this will probably emerge soon.

Pakistan is frustratingly looking for an agreement with the TTP. After years of bombing and fighting and killing nearly seventy thousand innocent people of North Waziristan under the Zarb-e-Azab massacre plan, Pakistan army has not achieved any of its goals or liquidated the TTP. Pakistan is entreating Haqqani Network of Afghanistan to mediate between the TTP and them. Pakistanis reportedly prepared to allow the FATA full autonomous status provided it recognizes the Duran Line. The TTP have rejected the offer outright. The fear of TTP disrupting law and order on a wide scale makes Pakistan look towards China.

Pakistan must now be realizing how indirectly it immensely strengthened India in terms of military power and economic growth by its much-touted “bleeding by a thousand cut”. No doubt, threat to India’s security is palpable if the Chinese troops land in Pakistan. Today about 60,000 Chinese are living in Pakistan ostensibly as technical manpower. But we all know that PLA has a different structurization than what we find in the armies of normal states. Thar coal mines are not far from the Indian border. In case Pakistan gives China a military base in or around Thar, India will have no option but to intercede and link up her offensive strategy with the operative potential of Baluch Liberation Army.