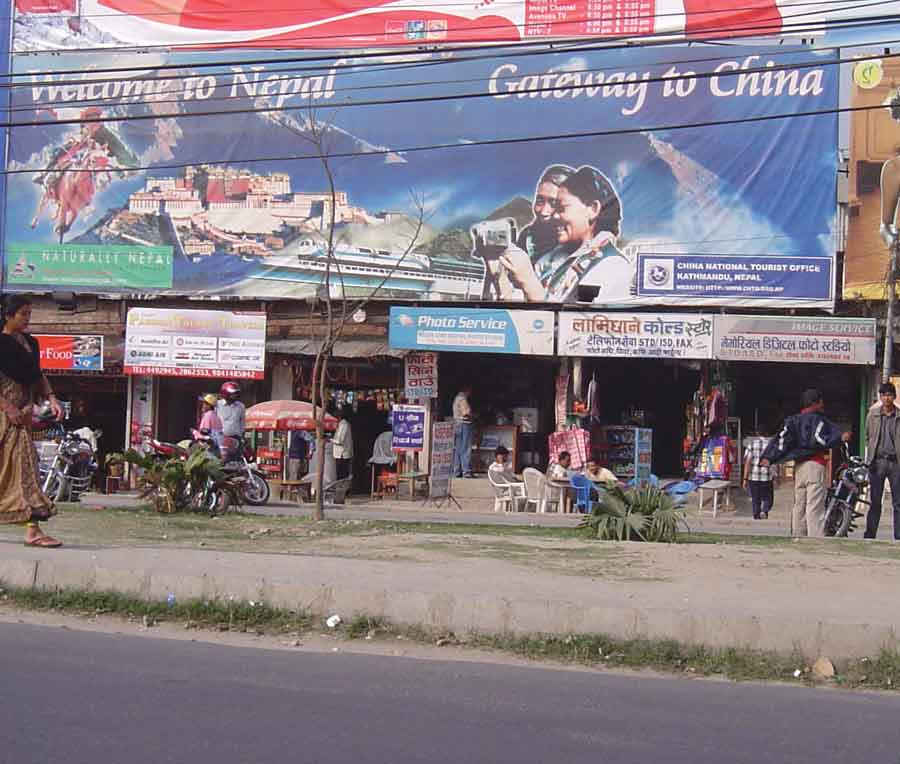 A China tourism hoarding outside Kathmandu airport with the message, 'Welcome to Nepal - Gateway to China'.

China-Nepal-India is a very complex set of relationship often invoking concerns and raising questions whenever Nepal gets closer to either India or China by playing the so called ‘card’ diplomacy. Nepal was called ‘a yam between two boulders’ by Prithvi Narayan Shah and how often has Nepal used this vulnerability to its advantage is hidden from no one. India and China have also competed for influence in Nepal for decades.

India and Nepal have shared close civilizational and socio-cultural relationship from ages that led to a ‘unique and special’ relationship between them. However, very recently, even China-Nepal relationship has been termed as being of a ‘special’ kind and ‘as high as the Himalayas’ by many in the political circles of both the countries. In such a scenario when Nepal is getting closer to China as a viable alternative to its overall dependence on India, should India be wary of the developments on its northern borders, keeping in mind the geo-political realities and China’s economic expansion and ambitions of trans-Asian connectivity.

On 27 March, 2016, the Nepal Army Chief, General Rajendra Chhetri, went on a week-long visit of China, the day Nepalese PM KP Sharma Oli concluded and returned from his week-long official tour of China. Earlier, Nepalese PM Oli was on a week-long visit to India in the month of February 2016. Military expert Brig Gurmeet Kanwal told The Hindu, “We have seen in the past instances of Pakistani military chiefs visiting China soon after the visit to Beijing by Pakistani Prime Ministers. Nepali Army Chief’s visit appears on the same style of civil-military engagement policy of China, which reflects coordination between different wings of Nepali government and China”.[1]

The question that arises here is whether this visit of Nepal’s Army Chief to China just after PM Oli’s visit is to be seen in normal economic/military terms or is there a certain message for India, signaling a geopolitical shift replete with strategic and political calculations. In what could be a red rag to New Delhi, Oli also called China an “all-weather friend”, a term loaded with China’s value for Pakistan as a deterrent against India. Can China, thus, begin to see in Nepal an ally just like Pakistan? Is China really checkmating India in Nepal?

As relations with India soured in the wake of the four months long blockade on key India-Nepal border crossings in 2015, China came to Nepal’s rescue with a deal to supply a third of the country’s required petroleum. Kathmandu, in it, saw the importance of diversifying its trade away from India. Taking a clue from it, Nepalese PM Oli, in end March 2016, has signed a transit agreement that includes access to Chinese ports as well as the potential construction of rail links between the two countries.[2] Currently, over 90 per cent of Nepal’s trade with third countries passes through India.[3]

The trade and transit agreement between China and Nepal, aiming at giving Nepal an alternative trade route, is however going to prove of little avail in terms of its implementation across the inhospitable terrain of the Himalayas, lack of transportation infrastructure linking China and Nepal and huge cost factor as third-country trade through the terrain of Tibet will cost Nepali importers 2-3 times what it would cost them to import goods via Indian ports. Tianjin port of China (3,000 km from Nepal) can at best provide Nepal with another option to conduct trade with third countries. It, however, cannot replace or even undermine the importance of Indian ports (Haldia is 1,000 km from the border) in Nepal’s trade. China and Nepal were also looking into the possibility of a rail link between the two countries, but even that seems uncertain. The terrain is so inhospitable that the planned rail link might involve the herculean task of tunneling under Mount Everest.[4] In contrast, routes between India and Nepal run seamlessly across plains.

China has another area of concern if it gets too close to Nepal. The Chinese are reluctant as greater engagement with Nepal will mean more traffic, of both people and goods, with Tibet. China apparently doesn’t want that since the border could then serve as a new conduit for Free Tibet activists.

New Delhi insists that Nepal “is free to explore any practical option it wants”. External Affairs Ministry spokesman said, “Our relations with Nepal have their own natural logic. Is there any other country in the world which can have the kind of relationship that Nepal has with India?”[5]

However, with growing Chinese interests in Nepal, India needs to bring greater purpose to economic engagement and investments in Nepal. Overall, it is still too early to sound the alarm. Nepal, as a matter of fact, cannot alienate either China or India. India has long been wary of China’s efforts to establish trans-Asian supply routes through its “one belt, one road” initiative – which Oli in his recent tour endorsed enthusiastically – and that is why India must probably continue to watch China-Nepal ties very closely and recalibrate its position.

In 1989, when King Birendra sent a delegation to Lhasa in response to the Indian blockade, China clearly signaled that it could not even think of replacing India in Nepal for another three decades.[6] After the 2015 blockade on India-Nepal border, Nepal again went to China and this time China did not say that it would not be able to help Kathmandu. So, has the time finally come, after almost three decades, when China is thinking of replacing India in Nepal or is it just an overture and conclusion thought too early by some political analysts and observers? China has deepened its engagement with Nepal across social, political and economic spectrum, but at the same time understands its geopolitical limits in Nepal and realizes that it still cannot completely replace India in Nepal. Pragmatists in Beijing also know the dangers of moving too far and too fast and provoking an Indian reaction.[7]

[2] “What the Nepalese Prime Minister’s visit to China says about the Wider Politics of Asia”, The Time, 24 March 2016, URL: http://time.com/4270239/nepal-prime-minister-oli-visit-china-beijing-india/

is a Research Assistant with CLAWS.

2 thoughts on “China-Nepal ‘All-weather Friendship’ – Should India be Wary?”