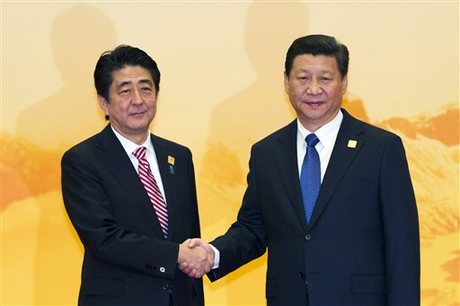 China’s invitation to Japanese PM Shinzo Abe to visit China in end-October 2018 may be significant in terms of China’s shift to reset relations with Japan due to prevailing geopolitical pressures but it certainly does not herald ‘game-changer’ long term perspective in established US-led security architecture in East Asia.

China’s latest attempt to reset relations with Japan is not the first such attempt as past attempts were prematurely abandoned by China. The Chinese reset attempt in 2018 seems to be prompted by geopolitical pressures weighing heavily on China. The foremost is the worsening conflictual contours of US-China confrontation in the Indo Pacific and the US-China trade wars.

Geopolitically, the United States continues to be in a position of global predominance and much as China wishes the United States is not a power in decline. In terms of Indo Pacific security, the United States is engaged with both Japan and India in putting in place security mechanisms to checkmate China’s unhindered rampage. China’s over-riding aim would be to at a minimal dilute this coalition if not unravel it.

Expectedly, both Japan and India would openly deny any such strategic intentions but a realistic analysis of the geopolitical moves of the United States, Japan and India does not suggest otherwise.

China’s reset initiatives of improving relations with Japan after nearly a decade of hiatus needs to be viewed from this perspective and also preceding attempts to reset relations with India after Dokalam 2017 military standoff.

Japan was and continues to be the linchpin of the US security architecture in the Indo Pacific and an enduring security partner in the region. This raises the moot question as to what can China achieve in a reset of relations with Japan fully conscious that Japan cannot be weaned away from the US orbit and its US security linkages.

The above also suggests that after the Japanese PM Abe’s visit to China and the announcement that Japan and China would now seek to move from ‘competition (read confrontation to cooperation) the only domain open for forward movement is trade relations and economic engagement. Suggestive of the above was a 500 strong Japanese trade delegation which accompanied the Japanese PM Abe on his visit to China.

Japan and China suffer from intense strategic distrust of each other both historically and also contemporaneously are emerging from a virtual fundamental clash of national security interests. China’s meteoric military rise was accompanied by Chinese military arrogance that China could politically and militarily coerce Japan to do China’s bidding as China set out to reorder the East Asian regional order.

Japan was no political or military pushover like Vietnam and the Philippines as China soon realised over confronting Japan on claiming sovereignty over the Senkaku Islands in the East China Sea. Not only did Japan stand-up firmly against China’s aggressive moves around these Islands, Japan prevailed over the United States to publicly assert that under the US-Japan Mutual Security Treaty the United States was treaty-bound to aid Japan in case of aggression against the Senkaku Islands.

Coupled with the above were recent moves by Japan in all his three tenures as Japanese Prime Minister, PM Abe’s drive to raise Japan’s military profile obviously as a reaction to China’s dangerous brinkmanship in the South China Sea and the East China Sea including possible changes in Japan’s Peace Constitution. Japan under PM Abe has become more assertive in the regional and global security domains.

Notably therefore, Japanese PM Abe’s visit to Beijing was from a position of strength and Japan’s new assertiveness in the foreign policy spheres. One could term it that Japan has ‘come out ‘for a change in its policy approaches to China. China appeasement by previous Japanese Prime Ministers was in 2018 replaced by a strong and assertive Japan ready to engage China to ensure a peaceful regional environment.

The Chinese reset initiative geopolitically impelled can be explained by multiple Chinese impulses across a wide diplomatic spectrum incorporating Chinese objectives from driving a wedge in the enduring US-Japan security linkages; slowing  Japan’s move towards more assertive military profile under PM Abe; exploiting Japanese concerns on US opening to North Korea without much success on denuclearisation; weakening the Indo Pacific security template evolving on the shoulders of United States, Japan and India primarily; and a seeming convergence of China and Japan on US trade pressures under President Trump.

Japan’s aims at responding to China’s reset moves can be attributed to Japan’s concerns on the worsening security environment in East Asia primarily because of China; Japanese hopes that the opening provided by China could possibly reduce the Japan-China confrontation around the Senkaku Islands; exploiting the Chinese market for Japanese trade and commerce in light of Us tightening the screws on US-Japan trade relations.

Realistically, Japan-China relations cannot be expected to not to be impacted by the overall health of US-China relations. US-China relations in end -2018 are at the lowest ebb and with the arithmetic on Capitol Hill having changed with the recent mid-term elections the US Congress in line with US public opinion is likely to be more hard-line on China.

Japanese PM Abe would not be unaware of the above emerging reality and hence even the friendliest gestures by Japan have to operate within the limits of this emerging US framework.

Japan cannot also be unaware that what holds back Russia from moving ahead in settling the Northern Islands return to Japan is Chinese sensitivities against any normalisation of Russia –Japan relations.

Japan has however gladdened China’s hearts by showing some interest in the One Belt One Road (OBOR) Silk Route projects. Japan cannot be blamed for the interest in the continental connectivity routes spanning Asian landmass to Europe. This would cut transportation costs of Japanese exports to Europe. Discussions are still in initial stages.

Finally, while any reset of relations to improve security and stability in Indo Pacific would be widely welcomed but the historical record of Japan-China relations indicate that any forward movement in establishing cooperative relations between these two mighty Asian powers can only be painfully incremental. For Japan it is vital to have a secure neighbourhood but China’s actions ever since 2012 markedly have not been conducive to promote regional peace. The reverse is true that ever since 2012 China has been more intent on disrupting peace and stability by its aggressive brinkmanship in the South China Sea and East China Sea territorial disputes. Chinese-generated turbulence in both these Seas affects Japan vitally and will colour Japanese perspectives considerably.