China and Japan in Dangerous Waters 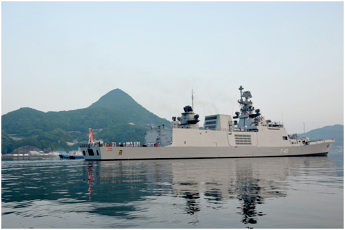 In response to the recent moves made by the US in the South China Sea and by Japan through its growing involvement in the South China Sea and its participation in the Malabar Exercise 2016, China has made an aggressive overture by dispatching a navy warship Jiangkai I through the seas of Japanese-controlled Senkaku Islands in the East China Sea on 9 June 2016. China calls the disputed islands by the name Diaoyu. Either Japan or the United states has been administering the small group of islands since 1895 to which China started claiming its control since the 1970s. Although incursions by Chinese ships and aircraft have been increasing ever since the nationalization of the islands by Japan in 2012, this is for the first time that China has used a naval vessel instead of a Coast Guard or other state ship to venture near the islands.[i]

The Jiangkai I class warship crossed the ‘contiguous zone’ – an area within 24 nautical miles of the uninhabited Senkaku rocks, though outside the 12-mile limit considered territorial waters under the United Nations Law of the Sea Treaty.[ii]

For Japan, there was thus no basis under UNCLOS to protest the Chinese ship, as there are no restrictions on passage through the Contiguous Zone. But because China does not recognize Japan’s claim over the Senkakus, the presence of a warship for the first time is being viewed as uniquely sensitive. This has been seen by the Japanese as an open act of provocation and they have reacted vigorously. Japanese Chief Cabinet Secretary Yoshihide Suga told the reporters that “the government was deeply concerned by the Chinese move. We, in coordination with the United States and the international community, strongly demand that China not repeat such behaviours that unilaterally heighten tensions”.[iii]

China has, however, denied the allegation and in a response to the Japanese complaint said that “The Diaoyu Islands…are Chinese territory. For China’s military vessels to pass through waters under the country’s own jurisdiction is reasonable and legitimate…”[iv]

This Chinese move can be seen as an outcome of the growing Japanese involvement in Southeast Asian affairs and the South China Sea disputes. Japan has repeatedly been voicing concern over China’s reclamation of the islands and its construction activities in the South China Sea. Japanese participation in the Malabar Exercise 2016 in the Philippine Sea together with its significant security overtures to the Philippines has further escalated the Chinese exasperation leading to the recent Chinese action. The dispatch of the navy warship can, thus, be seen as a signal to Japan not to take the status quo in the East China Sea for granted if it persists in involving itself in the South China Sea.[v]

China also seeks to legitimize its access to natural resources, oil and gas, which the region is replete with. Some analysts also see this Chinese move as a partial response to the US Freedom of Navigation operations in the South China Sea. Overall, this latest move by China is indicative of its resolve to face what it sees as a growing informal US alliance structure in the region.[vi]

However, this recent desperate move by China is not going to serve any of its causes. China, by remaining in the Contiguous Zone, has inadvertently showed either a de facto recognition of Japan’s claims or that it was unwilling to risk a militarized response from Japan and its ally the United States. Japan will now certainly increase its vigilance which will also not be in Chinese favour. It will also lead to confirmation of the US security guarantee. By probing the Senkakus to escalate its dispute with Japan in the East China Sea, China has actually revealed how weak its position in the dispute is.

The Chinese behaviour might also face a counter-strategy in the face of the possibility of a stronger US-Japan-India alignment. Finally, none of the parties either in the South China Sea or the East China Sea can go for an all-out confrontation but they keep rattling each other in the waters, thereby increasing tension in the region. The solution, however, lies not in keeping each other on tenterhooks but only in peaceful resolution of impending issues. China and Japan must handle the situation smartly for a peaceful Asia.

[i] Steven Stashwick, ‘That Chinese Frigate in the Senkakus was a Bad Move for China’, The Diplomat, 13 June 2016. http://thediplomat.com/2016/06/that-chinese-frigate-in-the-senkakus-was-a-bad-move-for-china/

[iv] Steven Stashwick, ‘That Chinese Frigate in the Senkakus was a Bad Move for China’, The Diplomat, 13 June 2016. http://thediplomat.com/2016/06/that-chinese-frigate-in-the-senkakus-was-a-bad-move-for-china/

is a Research Assistant with CLAWS.