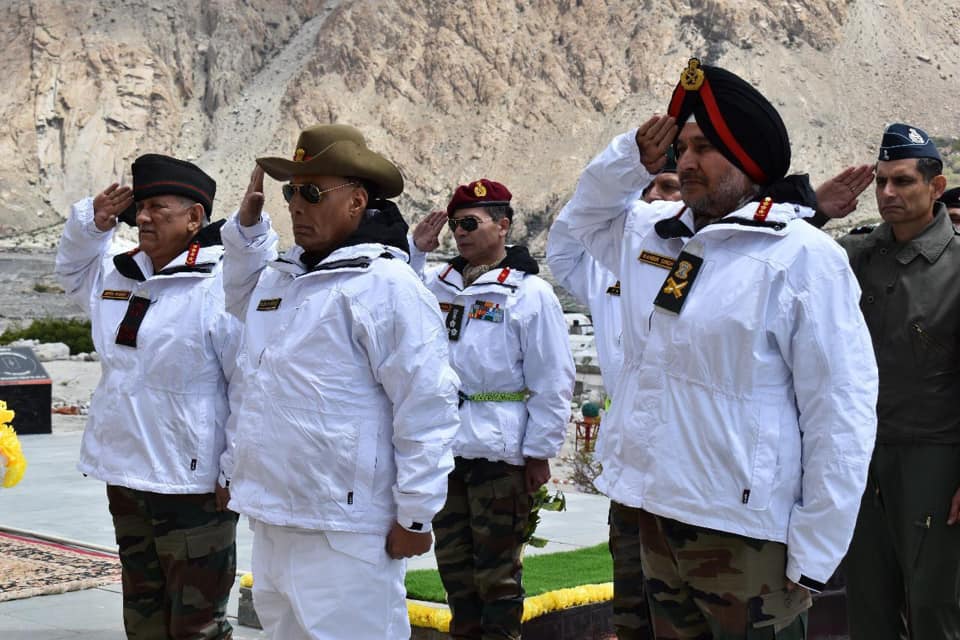 The appointment of Rajnath Singh as Raksha Mantri brought cheers and applause to the Defence Services community including the veterans, who are highly critical of the political leadership because of their bias towards bureaucracy.

Rajnath one of the most experienced and successful Home Minister has carried himself with dignity in the last five years. The cheer on Rajnath’s appointment is for the allegation that the armed forces were ill-treated under the previous NDA government for the implementation of 7th Pay Commission – downgraded their status, faulty interpretation of One Rank One Pension (OROP), sanction of the nonfunctional upgradation (NFU) to all other central government services including Central Armed Police Forces (CAPF) except the Armed Forces and so on. Hopefully, Rajnath will be able to restore the honour, dignity, status and warrant of precedence of the armed forces, which has been denigrated by the previous governments over the years.

The MoD is simply too complex and too mind-boggling for any new entrant, including the Raksha Mantri himself. On his part, what Rajnath has to realise is that the armed forces are a divided house, where turf protection is high on the agenda of individual services. The level of confrontation between the bureaucrats and the armed forces fraternity has reached dangerous levels and it is now becoming counterproductive, weakening national security. A civil-military relationship of mutual respect is something he will have to work on which he is capable of achieving.

In 2018, Vice Chief of the Army told the Parliament’s Standing Committee on Defence (PSCOD), “68 percent of our equipment is in the vintage category, with just about 24 percent in the current, and 8 percent in the state of the art category.”

Defence takes up the second largest head of expenditure of the Union government, but despite this, there are key gaps in submarines, jet fighters, and artillery, to name a few. Worse still, defence pensions, though not officially counted as part of the Budget, exceed the salary and allowances bill of the three services, as well as the money the three services have to buy new equipment. The Union government already spends more than one-third of its total capital outlay in a year on defence. Hence, finding more money is not an option, especially for a government that has a vast social welfare agenda.

Military reforms: Over the last three decades, India has failed to push through one of the third largest 1.3 million military into a leaner and meaner force, while China on the other hand has been able to accomplish much more. The lack of reforms has made sure that the Indian military’s ability to fight swift wars remains constrained.

As attrition wars have become more and more unlikely, the People’s Liberation Army (PLA) has cut its size (3 lakh) in favour of a more agile air force and a highly mobile true blue-water navy. Army Chief General Bipin Rawat did appear to have taken a clue, constituting three committees in 2018 to look into manpower rationalisation, paring down army headquarters and examining the officer cadre, but the process does not appear to have moved significantly since, except orders to move 229 officers from the Army headquarters to border areas.Army alone has shortage of more than 14,000 officers, which is affecting the efficiency of normal day today functioning of the forces.

Higher defence management:Manpower rationalisation is not the only reform that has to be pushed through.The national Security Review had recommended appointment of Chief of Defence Staff (CDS) to provide single point military advice to the government, improve jointness and resolve inter-service doctrinal planning, policy and operational issues. A more controversial reform is the creation of theater commands to promote jointness among the three services for better utilisation of limited resources. Rajnath will have to work towards building consensus among the three services to get to the stage where theater commands are acceptable to all, or develop a new mode of jointness that works for India. The sooner India moves away from coordinated to integrated operations, the better.

Modi’s image of a leader who is tough and uncompromising on issues related to national security gives the defence minister a unique opportunity to put these reforms into motion without any adverse political fallout.

Integration of MoD: A proposal to integrate the MoD on the basis of existing models in most of the developed countries has been languishing for the last two decades. When implemented, it will bring officers of the armed forces to occupy appointments alongside bureaucrats in the MoD. It will also help to promote mutual trust and greater professionalism among the Services headquarters and the bureaucracy.

Most defence ministries in the world have a substantial level of uniformed personnel who provide expertise on matters of procurement and policy. But in India, the government rules mandate that the armed forces are merely ‘attached offices’ of the ministry and have no role in policy-making or running the ministry itself. After calls for change especially through the Group of Ministers (GoM) who proposed a slew of reforms in 2001, the ministry claimed it had integrated the armed forces into the ministry by merely re-labeling the armed forces headquarters as ‘Integrated Headquarters Ministry of Defence, Navy’ or ‘Air Force’ or ‘Army’. Actual integration is far from reality as recommended by high powered Naresh Chandra Committee in 2011.

Streamlining defence procurement: Critical issues relating to Defence Procurement Policy, especially the Strategic Partnership (SP) which has yet to be cleared. Under the SP policy introduced in 2016, a private player and a Foreign Original Equipment Manufacturer (OEM) were to be selected for four specific projects, which included the construction of submarines for the Indian Navy, a new fleet of naval utility helicopters, armoured vehicles and fighter aircraft for the Indian Air Force.

The SP Model aimed at increasing the private sector’s share in defence manufacturing also appears to have made little headway. For example, Project 75-I for six conventional submarines, which is to be executed under the SP model, is yet to take off. The process of acquisition of 111 naval utility helicopters to replace the obsolete Alouette II/Chetak is also moving slowly.Hence, Defence Minister has a lot of critical issues in defence manufacturing to sort out.

While the IAF is waiting for the long-delayed Request for Proposals for 114 fighter aircraft to help in enhancing the dwindling numbers of the fighter squadrons. The IAF will be welcoming its first of the 36 Rafale fighter aircraft from France in September this year.

Despite some efforts between 2014 and 2019, India’s defence procurement remains over-bureaucratised resulting in lethargy. Delays in decision-making, combined with the risk averseness of the bureaucracy, have had a debilitating effect of the combat capabilities of the forces.

The lack of experience and professional training of those part of the acquisition cycle in complex legal, contractual and technical matters, as the Comptroller and Auditor General (CAG) too has identified, adds to the delays caused by the bureaucratic bottlenecks. “A specialised cadre pool of Acquisition Managers should be developed by imparting suitable training in different areas of acquisition viz. Project management, contract negotiations, contract management; and exposure to professional best practices of procurement,” the CAG had earlier suggested.

These issues will need Rajnath’s immediate attention.  In the meantime he will have to work through the existing set up to buy some critical equipment—namely fighter jets for the air force to add to the Rafale numbers, submarines and helicopters for the navy—on an emergency basis.Other critical acquisitions programmes that Rajnath will have to steer: induction of Tejas to replace MiG-21s, Airborne Early Warning and Control (AEW&C) system,self propelled artillery guns and minesweepers.

The Defence Procurement Policy of 2016 was a step forward towards increasing the private sector’s participation, but challenges persist. For example, private players signing a contract are required to deposit a bank guarantee. In some cases, this amount to a large part of the total order value, affecting the availability of liquid funds with the vendor. This, in turn, affects the vendor’s ability to deliver timely.

Moreover, most contracts in India take three to five years to materialise. Therefore, until a vendor has other sources of income or funding to sustain, it is even difficult to survive in the market. While this is not an issue for large businesses like this affects Mahindra and L&T, start-ups and small and medium enterprises.

National Security Strategy:A comprehensive national security strategy (NSS), which spells out the challenges that India faces in this realm and the tools needed to neutralise them, can prove to be an effective guide for building capabilities of the armed forces. An effective NSS would identify the military resources required to deal with the challenges that it outlines. In the absence of a strategy, India’s response to challenges, including the procurement of equipment for the armed forces and development of technology for the future, has remained ad hoc.

Rajnath will have to make sure that the Defence Planning Committee (DPC) established in 2018 under the national security adviser Ajit Doval and tasked with drafting India’s NSS, delivers. Attempts at preparing a national NSS have failed in the past. Also, the longer the DPC takes to prepare a security strategy, the lesser time he will have to use it to put into motion the acquisition of capabilities required in the future. With the upgradation of national security adviser, Ajit Doval may not have time now to draft NSS even with the support of three services chiefs. Rajnath therefore may have to select another committee from the services who should be able to formulate NSS. Rajnath has both, political heft and Modi’s mandate to push through these reforms.

Jammu and Kashmir:  Another critical issue that the defence minister has to look into an urgent basis is having a long term Kashmir strategy.  He has dealt with Kashmir as a home minister and his expertise will help in formulating a new strategy.

Not to be missed out is the fact it is in his tenure as home minister that Jammu and Kashmir witnessed Operation All Out, the combined operation of the army, local police and the CRPF, which has succeeded in good measure in neutralising a large number of terrorists since early 2017. Functioning in compartments, especially in Jammu and Kashmir has been the bane of the system, which has marginally improved in recent years and could see better days under Rajnath.

The restructuring of the armed forces to meet modern day threats is ongoing but larger decisions such as the one on the appointment of the CDS, the theaterisation of field commands, restoration of the Indian Air Force to a 42 squadron force (from the current 32) and making the Indian Navy equipped and trained for its assigned new role in the Indo-Pacific are all issues that Rajnath is well aware of, having been a part of the Cabinet Committee on Security (CCS) as the former home minister.