Home  >  Spotlights  > Military & Aerospace  >  Ceasefire of Indo-China War 1962: Victory has many Fathers; Defeat is an Orphan

Ceasefire of Indo-China War 1962: Victory has many Fathers; Defeat is an Orphan 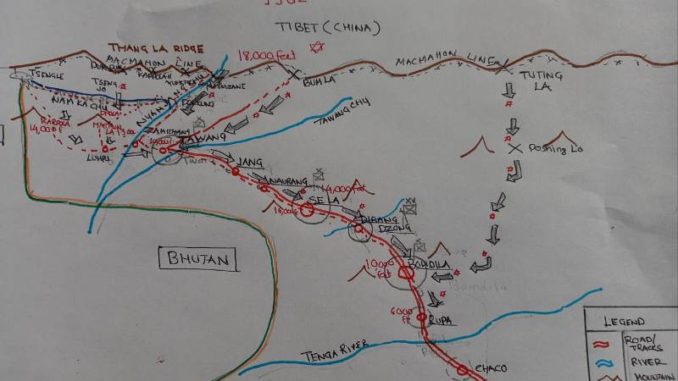 On 20 October, 1962, in NEFA, units of 7 Infantry Brigade were overrun, after giving stiff resistance to People’s Liberation Army (PLA).  Tactical headquarters of Red Eagle division, under Major General Niranjan Prasad which was located at Zimithang withdrew on 21 October 62 to Tawang and subsequently to Dirang Dzong valley. Tawang Garrison, which had two infantry Battalions and three Artillery batteries under 4 Artillery Brigade commanded by Brig. Kalyan Singh, was also abandoned without giving a fight on 23 October. The Chinese Force 419 linked up with the 11 Chinese Division offensive that approached from Bum la axis on 24 October. The only courageous action was that of Subedar Joginder Singh whose Platoon was deployed on an advance position on IB Ridge ahead of Tong Pen La on Bum la axis, fought to the last man and last bullet and inflicted heavy casualties on the Chinese troops heading for Tawang. He was awarded Param Vir Chakra (posthumously) for his gallant action and resolute leadership. Thus, Phase 1 of the war ended with a general rout of 7 lnfantry Brigade and fall of Tawang.

The situation could have been contained had the leadership shown the guts to fight. Se La, Dirang and Bomdi La were formidably held on Tawang-Tezpur axis. The Tawang-Tezpur axis is 180 kms with additional 25 kms to reach Bum La. Bomdi La is at 11000 feet, Se La at 14000 feet and Tawang  at 10000 feet; the higher areas like Bum La are at 18000 feet plus. Due to difficult terrain and steep gradients the travelling time beyond Dirang Dzong and onwards to Tawang used to be measured in days and not in hours. The ammunition, rations and stores were either carried man/mule packed or air dropped.  Extreme cold conditions and wind chill factor could bring down temperature below minus 10 degree Celsius. The rivers in this area like the mighty Brahamaputra, Nyamjang Chu and Nam ka Chu were formidable obstacles. There were few jeep-able tracks in the region. The road till Bomdi La was broad, by the time it reached Twang it was just a narrow strip. Despite such formidable terrain to the disadvantage of the attacker, the Indian formations could not hold their ground.

A small view of the situation before the war! The then Prime minister Jawahar Lal Nehru, had been convinced by his flamboyant leftist Defence Minister Krishna Menon that China would not retaliate to the forward posturing of  ill equipped lndian troops. General P N Thapar was appointed Chief of Army Staff (COAS) after unceremonious departure of General Thimmaya and supersession of General Thorat. Lt. Gen. LP Sen was Eastern Army Commander and Lt. Gen. Umrao Singh was 33 Corps Commander. Major Gen. Nirajan Prasad was the commander of 4 Infantry Division.

There was a clash of opinion between Lt. Gen. Umrao Singh and Lt. Gen. L P Sen regarding deployment of troops beyond Nam Ka Chu River on Thang La ridge which was considered to be on the lndian side of the McMahon line. Then, came the meteoric rise of Lt. Gen. BM Kaul who was very close to the prime minister. He was appointed 4 Corps Commander. On 5 October, 1962, 4 lnfantry Division was removed from 33 Corps and put under direct command of the newly raised 4 corps located at Tezpur.  Kaul made sure that 7 lnfantry Brigade moved up from Tawang to River Nam Ka Chu despite of reservations by the Brigade Commander Brig JP Dalvi. He overruled his Brigade Commander and went for linear defensive positions.

When the two sides engaged in battle, Lt. Gen. Kaul was stunned by Chinese retaliation and left the battle field of Dhola ridge for Lumpu and thereon by helicopter for Tezpur. The next day he was evacuated to Delhi Army hospital and put under treatment for high altitude sickness. All through the war the Corps Commander of 4 Corps was in a VIP ward in Delhi cantonment hospital.

On 23 October, even as the battle raged, the COAS decided to overhaul the top order. Major Gen. Harbaksh Singh was rushed to Tezpur to take over command of 4 Corps.  Maj. Gen. A S Pathania, MVC, MC   replaced Maj. Gen. Niranjan Prasad.  The commander of 62 Infantry Brigade, Brig. N K Lal was replaced by Brig. Hoshiar Singh. 65 Infantry Brigade at Dirang Dzong also got a new commander, Brig. GM Sayeed. Brig. Gurbaksh Singh, Commander, 48 lnfantry Brigade located at Bomdi La was the only senior officer retained. Military analyst agreed that replacement of 4 Corps Commander was a sound decision but that of others in the thick of battle was not advisable.

The Chinese foxed the Indian political and military leadership by having long lull in the battle on 24 October. They had achieved their aim to humiliate India and were not ready to advance further due to a long logistics tail. Hence they paused to review progress of operations in Phase 1. The morale of 4 Corps was restored with the appointment of Lt. Gen. Harbaksh Singh who was a seasoned and strong military leader and had vowed not to permit any withdrawal. The uneasy lull continued.

Lt. Gen. B M Kaul, surprisingly, was reinstated on 30 October 1962 as 4 Corps Commander and Lt. Gen. Harbaksh Singh was reverted to his old appointment. The troops were not happy with the reinstatement and morale again deteriorated.

The rehabilitated Corps Commander and the new Division Commander finally decided to convert Se La pass area, into an impregnable fort. Brig. Hoshiar Singh was made in charge. He was a tough soldier and liked by his troops. The lull in battle had given opportunity to lay mines, barbed wires and build formidable bunkers/trenches. The stocks of rations and ammunition were sufficient for 20 days. Se La top shoulders at 16000 feet were held strongly. Se La fort was fully ready to take on the Chinese offensive by end of 28 October 62.

Dirang Dzong village was in the valley of River Dirang down at 7000 feet and was occupied by 65 lnfantry Brigade.  The area was about 30 kms from Se La and again well defended but down in a valley dominated by heights. The Bomdi La defences held by 48 lnfantry Brigade were again well sited and formidably defended at the height of 10000 .

The second phase of the Chinese attack commenced at first light on 17 November 1962 after a lull of 23 days. 4 Garhwal was attacked by Force 419 lnfantry Regiments at Naurang and Jang. They beat back four attacks and withdrew to Se La fort on orders. The Battalion Commander was awarded MVC for giving a pitched battle to Chinese. Meanwhile, Special Forces of PLA attacked 2 Sikh LI. Brig Hoshiar Singh and his troops remained firmly in control on the situation.

The Chinese started psychological operations by using rumours and propaganda through media. They established road blocks and lay ambushes on routes of withdrawal and then made it known that there was no possibility of reinforcement. The rumours set in the panic. The Indian leadership felt that Se La defences would be bypassed and isolated.

Without discussing the situation on ground at Se La with his Brigade Commander the GOC 4 Corps, Lt. Gen. BL Kaul approved withdrawal of  62 Infantry Brigade that was firmly entrenched and capable of fighting for minimum 15 days. Brig Hoshiar Singh, who has pledged to give a bloody nose to the Chinese, was absolutely disgusted and he conveyed his disgust to the senior officers. Brig Hoshiar Singh’s withdrawing column was ambushed and he was killed. The withdrawal became a rout and soldiers in small groups got back through Bhutan and other places.

The Chinese Force 419 Reserve Regiment headed for Dirang Dzong after clearing pockets of resistance at Se La.  The GOC of 4 Infantry Division, Maj. Gen. A S Pathania, panicked and ordered immediate withdrawal. He planned to join up 48 Infantry Brigade at Bomdi La but en-route he was wrongly informed that Bomdi La had fallen .The whole force disintegrated and turned southeast cross country and headed for Bhutan and plains of Assam.

Meanwhile Bomdi La was defended by 48 Infantry Brigade under Brig Gurbax Singh. He was confident that he would be able to stall the Chinese forces. Suddenly the Corps Commander conveyed fresh orders that Dirang was to be reinforced. Accordingly, 1 Sikh LI left Bomdi La  and moved towards Dirang leaving a huge gap in the northern defences of Bomdi La. The Chinese troops launched a large number of attacks. Bomdi La was finally abandoned on last light on 18 November 1962. 48 Infantry Brigade redeployed with available troops at Rupa overlooking Tenga valley 10 kms away from Bomdi La.

USA ambassador John Keneth Galbraith was in constant touch with the Indian prime minister and wrote two letters on 13 November and 06 December 1962 to President John F Kennedy regarding the lndian military disaster. He recommended heavy military aid to India and issue of warning to China.US president who was earlier busy in defusing Cuba missile crisis with USSR, gave an ultimatum to China that any further aggression on India will be treated as attack on the United States. Chinese Military commission finally agreed for unilateral ceasefire after claiming that its mission had been accomplished. Radio Peking announced the ceasefire at dawn of 21 November 1962. The 21 Days long India-China War came to an end with China withdrawing to the McMahon Line

On the last day of the war, 4 Rajput while withdrawing from Dirang fought a pitched battle at Mandiala Ridge with the Chinese in which 175 troops including the commanding officer made the supreme sacrifice after inflicting heavy casualties on PLA.

Reasons for the Himalayan blunder are many. The top Political leadership was not prepared for the War. Competent and professionally sound military leaders were removed or superseded and favourites were upgraded. 4 Corps Commander was changed on 24 October and again on 30 October. Division and Brigade commanders were changed during mid battle. There was lack of faith and communication in chain of command. . Military equipment was obsolete, troops were neither acclimatised nor properly equipped. Air force carried out no offensive action. Artillery was seldom used. The defence minister interfered with military leaders and military plans. He blocked all military equipment. All intelligence agencies were found wanting. Overall, India as a nation was not prepared for war. Victory has many fathers but in defeat you stand and orphan, this was the fate of the political and military leadership of the day.

2 thoughts on “Ceasefire of Indo-China War 1962: Victory has many Fathers; Defeat is an Orphan”