Home  >  Spotlights  > Homeland Security  >  C I Operations in the Northeast

C I Operations in the Northeast 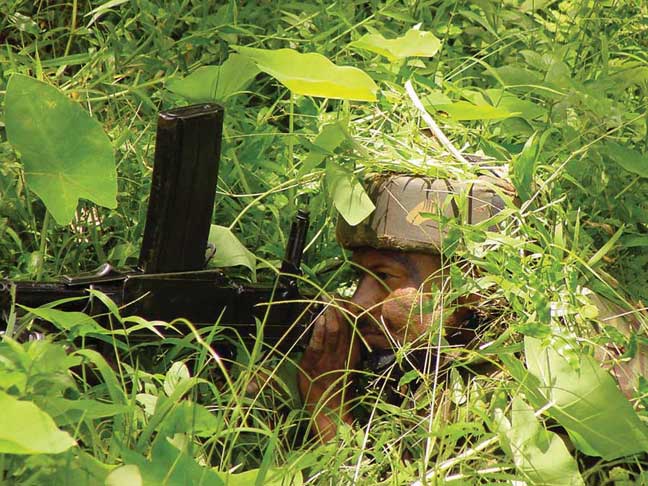 Prior to 20th century guerrilla warfare was regarded as purely military form of waging war. It was the weapon of the weak against the strong. The guerrillas employed ‘hit and run’ tactics against their adversaries. This form of warfare was also applied to the role of irregular troops acting as partisans in support of conventional forces.

Guerrilla warfare as a means to wage war came into prominence in the last century against colonial occupation. In the middle of the last century, guerrilla war took a new characteristic when political factors were grafted on irregular military tactics.1

Dissident groups initially in minority and weaker than authorities, would seek power through a combination of subversion, propaganda and military action in the form of guerrilla warfare. The process came to be termed insurgency.2 After the Second World War insurgencies became the major threat to governments all over the world.

Contrary to experience, regular soldiers in most democratic armies believe that they exist primarily to fight conventional wars. Between 1960-63 John F Kennedy identified communist inspired insurgency as the predominant threat to American interests. Kennedy’s National Security Action Memorandum No 124 of 18 January 1962 saw insurgency as a major form of politico-military conflict equal in importance to conventional warfare.3

Modern British doctrine is heavily based on North-West Europe campaign of 1944-45. Yet, out of 94 separate operational commitments between 1945-1982, only 14 were not in some form of low intensity conflicts. Indeed, for the British Army only significant recent conventional experience have been 35 months of participation in the Korean War (1950-1953) when only five infantry battalions were deployed at any given time, followed by 10 days at Suez in 1956 and 24 days of land campaign in the Falklands in 1982 and 100 hours of land operation in the gulf (1990-1991).4 The Second Gulf War in Iraq has already turned into an insurgent war.

The Indian experience has been mixed. Soon after independence the Army fought a bitter war against the newly created state of Pakistan over Kashmir (1947-1948), followed by a short war of 21 days in 1965, once again over Kashmir, and finally the war with Pakistan in December 1971, lasting not more than a fortnight, but with a decisive victory over Pakistan, which resulted in the creation of yet another state – Bangladesh. In 1962 the Indian Army fought a border war with China, which lasted for about a month resulting in India’s humiliating defeat. But only a very small component of the Indian Army was involved in actual fighting. The Air Force was kept out of the war.

In the closing year of the 20th century, India once again fought a conventional border war with Pakistan on the Line of Control in the Kargil sector of Jammu and Kashmir, lasting six weeks. The war was confined to a small geographical area and only two divisions of the Army were involved in combat.

The training manual of the Indian Army emphasises minimum force as one of the cardinal rules of engagement when called out in aid of civil authority. This was originally formulated by the British to deal with situations like crowd control, communal rioting, unruly mobs and violent political demonstrations. The scope and meaning of internal security has, however, fundamentally changed…

As against the intermittent commitment in conventional wars, the Indian Army has been fighting insurgency almost continuously since independence. The Army was called out in Nagaland to quell insurgency in 1956, and since then it has been involved in counter-insurgency operations not only there but in almost all of north-east in an ever escalating area of operations. In 1984 the Army was called out to restore order in the Punjab and launched the infamous Operation Bluestar, which led to virtual insurgency that was put down at great human and economic cost by the Punjab Police, assisted by the Army and the para-military forces. By the time the situation in Punjab was brought under control in the early nineties, Kashmir was aflame with insurrection aided and abetted by Pakistan.

The proxy war in Kashmir continues till today. In between nearly four divisions of the Army were deployed in Sri Lanka to fight the insurgent LTTE to later enforce the India-Sri Lanka Accord of 1987. The casualties suffered by the Army in counter-insurgency operations in the North-east, Kashmir and Sri Lanka far exceed the total number exacted by all the conventional wars since independence.

Counter-insurgency operations have provided the staple operational fare for the Indian Army more than any other, except, perhaps, the Israeli Army, and yet it has not received the attention it deserves. In most armies counter-insurgency operations are regarded unglamorous, where success cannot be easily measured and results are not immediately visible. But the perspectives are changing and the role of the army is being re-defined. This is how General Shankar Roychowdhury, the former Chief of the Army and member of the Rajya Sabha, perceives the change: “The proxy war sponsored by Pakistan in Kashmir and its linkages with insurgency and violence in the North-east and elsewhere in the country have involved us in direct and indirect battlefield contact with Pakistan for over a decade now. These externally supported low intensity conflicts had completely redefined the traditional perception of external and internal threats, as also the categorisation of primary and secondary roles of the army, which was the main force dealing with them.”5

When Naga insurgency broke out in Nagaland in 1956, neither the Indian Army nor the political masters had any experience of dealing with such situations. There was no lack of good will for the hill tribes of the north-east amongst the policy- makers of independent India, which was profoundly influenced by its first Prime Minister, Jawaharlal Lal Nehru. Yet, when the unrest slowly spread to other parts and soon engulfed the whole of the north-east, the political leadership was slow to grasp the nature of insurgency and evolve a coherent policy, which took a tortuous path – from military solution to winning the hearts and minds of disaffected tribes.

Soon after independence, Nehru enunciated what came to be called the ‘Tribal Panchsheel’: “People should develop along the lines of their own genius; Tribals rights in land and forest should be protected; train and build up a team of their own people to administer and develop. Some technical help, from outside, will be needed. But we should avoid introducing too many outsiders into tribal areas; we should not over administer the area and overwhelm them with too many schemes.

Work through and not in rivalry to their (tribals) institutions. Judge results not by statistics or the amount of money spent, but by the quality of human character that is involved.”7 The above broadly constituted the policy framework around which the development of the tribal areas was to be accomplished.

After independence the tribal policy envisaged bringing the tribal population in the development process with the rest of the country as quickly as possible, but without any outside impositions and in conformity with their own cultural ethos.

The Rashtriya Rifles had been conceptually visualised as a specialised internal security formation with units constituted of seventy five percent ex-servicemen and balance from the regular army. But it didnt work out as originally conceived. Ever since its inception the force has 100 per cent deputationists from the Army…

In the process of development Nehru did not want them “to be swamped by people from other parts of the country” and wanted them to “live their own lives according to their own custom and desires”. He was also aware of the importance of keeping the tribes contented as “they live near the frontier of India and some of the same tribes live on the other side of the border, like the Nagas in Burma. They occupy thus a strategic position of great importance, which has grown in many years. Properly treated and encouraged, they can become a bulwark of our state. Otherwise, they are a danger and a weakening factor.”8

Nehru also visualised the pitfalls in implementing the tribal policy, which he had envisioned and articulated in letters he wrote to his cabinet colleagues and chief ministers. In a letter to CD Deshmukh Nehru commented, “They (Nagas) do not get on very well with the Assamese who, in the past treated them as inferiors. They are not prepared to tolerate any stigma of inferiority from anyone. As friends, they react well.”9 Nari Rustomji, one of our ablest administrators who served in the north-east for long years, observed in his book, ‘The Imperilled Frontiers’, that the unrest in the north-east has arisen not from any lack of goodwill on the part of the Indian Government but from want of understanding, empathy and sensitivity. His observation captured one of the many reasons for the tribe’s alienation from the plainsmen.

The operations against the rebels in the north-east have been undertaken with the understanding that they are fellow citizens and not enemies. This implied the use of ‘minimum force’. The training manual of the Indian Army emphasises minimum force as one of the cardinal rules of engagement when called out in aid of civil authority. This was originally formulated by the British to deal with situations like crowd control, communal rioting, unruly mobs and violent political demonstrations. The scope and meaning of internal security has, however, fundamentally changed over a period of time; it now encompasses aid to civil authority in situations vastly different, which include proxy war and low intensity conflicts where the protagonists are armed with sophisticated lethal weapons.

The terms of engagement formulated in the past are no longer valid and needs to be redefined. General Shankar Roychowdhury, a former Army Chief, defines it as ‘adequate minimum force, the adequacy of weapons and firepower for each situation to be determined by the field commander. This included heavier weapons like mortars or artillery whenever required.’10

Isolating the Populace from Insurgents: Grouping of Villages

Intelligence is the decisive factor in counter-insurgency operations. Conversely, it is equally important to deny information to the rebels, who depend heavily on the civil population not only for intelligence but also for logistic support. This meant isolating the rebels from population centres. The concentration of civilians in guarded areas to deny the guerrillas access to food or other support was not a new idea. Beckett observes that common approaches were emerging entirely independently in different armies faced with similar difficulties in the closing years of 19th century. Thus the British campaign against the Boers in the South African campaign, the Spanish campaign in Cuba in 1895 and 1998 and the US campaign in the Philippines between 1899 and 1902 – all three armies adopted what came to be called re-construction.

One thought on “C I Operations in the Northeast”