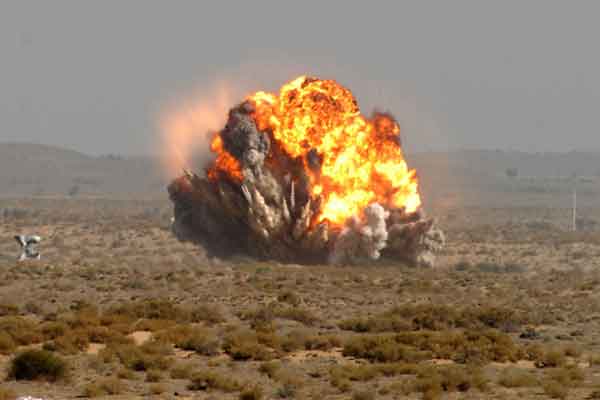 Just few years before India got its independence an unhealthy collision took place between the worlds of physics and politics. In 1945 the Americans nuked Japan. Since then in some parts of the world national security has become synonymous with nuclear weapons. Subsequently, during the Cold War era these weapons did succeed in bringing stability. In the Indian context these weapons have remained at the core of its national security debate. The debate subsided for sometime post the 1998 Pokhran tests, may be because of some sense of achievement.

However, the debate again came to the forefront during the Kargil conflict and during Op Parakram, an aftermath of attacks on Indian Parliament. Subsequently, the issue was hotly debated during Indo–US nuclear deal. Now, with pressure mounting on India to sign the Comprehensive Test Ban Treaty (CTBT) and with the news that Pakistan is ‘sharpening’ it’s nuclear arsenal the frenzy of debate on this issue has increased further. The good part of any nuclear weapons debate is that there are no grey areas. Either you are pro-nuclear weapons or anti-nuclear weapons. But, the bad part is that the pro-nuclear weapons lobby has become so much obsessed with nuclear weapons that they are unable to see life beyond nuclear weapons, particularly after questions being raised about the correctness of the ‘yield’ about Indian’s hydrogen bomb explosion some eleven years back. The issue about the efficacy of India’s nuclear deterrence is being debated with much rigor.  As of date these weapons are known to offer the best deterrence mechanism to any country.  The pro-nuclear lobby forgets that what is central to this debate is ‘deterrence’ and nuclear weapons are just a mechanism to achieve this and could even be dispensed with if better alternatives are found.

The pro-nuclear lobby forgets that what is central to this debate is ‘deterrence’ and nuclear weapons are just a mechanism to achieve this and could even be dispensed with if better alternatives are found.

It is a reality that many Indians, particularly the so called academic community and strategic thinkers view the world with a western prism. So, naturally since western theorists and intellectuals view nuclear weapons as an ultimate personification of deterrence so do their Indian followers. But, the issue is – ‘are nuclear weapons the only weapons of deterrence which should be used to scare the enemy, particularly in the 21st century, when military technology has become more advanced?’ Is it worthwhile to depend on this rudimentary technology of the 1940s? Is it not essential to check the feasibility of finding an alternative to the nuclear deterrence, particularly when it is clear that it’s difficult to resume testing to upgrade the existing nuclear weapon stockpiles?

Nuclear weapons became important not only because they have tremendous deterrence potential but also because this potential was showcased and marketed by few powers intelligently and effectively. It was told to the world by these powers that ‘this is the only deterrence mechanism available’ and people believed it. Few other means of deterrence were ‘concealed’ shrewdly. Take the case of biological weapons. Americans understood that these weapons have tremendous deterrence potential, are relatively easy to make and in future any state could deter them by possessing them. Up came the historic? Biological and Toxic weapons Convention Treaty (BTWC) in 1972. It was a brainchild of the Nixon–Kissinger duo which convinced the entire world that nobody should possess such weapons because they are against humanity! In the end with almost every state signing this treaty what Nixon achieved was to stop the growth of weapons which have potential to deter Americans.

With nuclear weapons the story is a bit different. The earlier possessors of these weapons are also incidentally the permanent five members of the United Nations Security Council (UNSC). They used this situation beautifully to their advantage. Luckily for them, the technology and the raw material (uranium/plutonium) required for the production of nuclear weapons is not easily available and accessible. These powers joined hands together to increase the level of difficulty tremendously for other states to lay their hands on nuclear weapons technology by evolving various global structures, arms control and disarmament regimes and technology transfer rules.

Unfortunately?, few countries like India defeated them in this game and managed to achieve the status of ‘nuclear weapon state’ which naturally they are not ready to accept. But, all this is history. Any deterrence mechanism cannot remain a static force. Your enemies need to be told time and again that you are better than them and they dare not attack you. On the other hand since India succeeded in getting a civilian energy nuclear deal in spite of not being a signatory to the Non Proliferation Treaty (NPT) the ‘giver community’ feels that India should sign the CTBT in return. However, India is the only country in the world with nuclear neighbors with whom it had earlier fought wars and has many unresolved issues pending till date. In fact, a significant amount of India’s defence planning, preparedness and expenditure is done to address any likely threats from these neighbors.

In the 21st century, with the advent of new technologies like lasers, nanotechnology, and biotechnology and smart munition, it is incorrect to look only towards nuclear technology to showcase the military might of the state.

In view of this, the ‘number and yield’ debate is obvious. However, now the time has come for India to look for additional and newer options to increase its deterrence potential because of the existing nature of the geopolitical landscape. In the 21st century politically it could be unwise on India’s part to resume nuclear weapon testing immediately. India is not a renegade state like North Korea. 2009 is not 1998 so it would be difficult for India to alter the prevailing global nuclear dictate all of a sudden. But, at the same time threats from Pakistan and China are getting further complicated. Hence, India needs weapons with higher deterrence potential. There is a need for India to supplement its existing deterrence mechanism with additional non-nuclear weapons which have the capability to ‘deter’. But, are such weapons available? Yes, major powers have already tested few weapons which could be termed as more dangerous than nuclear weapons. India could always develop such technologies or import them and that too in all probability without breaking any international legal/moral regime. Today, India has a much advanced military industrial complex. It is possible to develop such military weaponry with or without international assistance. The biggest challenge however lies in successfully ‘marketing’ these weapons as weapons of deterrence.

In the 21st century, with the advent of new technologies like lasers, nanotechnology, and biotechnology and smart munition, it is incorrect to look only towards nuclear technology to showcase the military might of the state. Modern military technologies allow a state to display its ‘power of deterrence’ without breaking the so-called global nuclear pretence. This is possible only if the state uses the emerging technologies with a view to find an alternative to nuclear weapons.

Before the start of the Iraq war in 2003, the United States had successfully tested one of the biggest weapons of this era, the Massive Ordnance Air Blast (MOAB), which, incidentally, is also known as the ‘mother of all bombs’. This test carried out by the US Air Force was that of the biggest conventional bomb ever tested. It was a 21,000-pound (9,500 kilogram) device essentially blasted to demonstrate to Saddam Hussein that the US has options beyond nuclear weapons. This GBU-43/B is a very large, powerful and accurately delivered GPS-guided high explosive. This bomb contains 18,700 pounds of H6, an explosive that is a mixture of RDX, TNT, and aluminum. Such composition is normally used for underwater blast weapons. At the time of testing this weapon did not give any specific seismic signature (as seen during nuclear testing), but what is important is that it demonstrated a capability of a huge munition capable of attacking both hard targets and anti-personal targets with great accuracy and with results as dangerous as a tactical nuclear weapon. This weapon is intended to have a high altitude release, allowing for greater stand-off range for the delivery vehicle. It also needs to be mentioned that a specific dedicated delivery platform is not necessary for such type of weapons, which at times becomes necessity for nuclear weapons. Such weapons are expected to have a substantial psychological impact like nuclear weapons. This weapon clearly demonstrates a possibility of carrying a deterrence potential for the enemy. However, additional research is needed in this regard to increase its lethality.