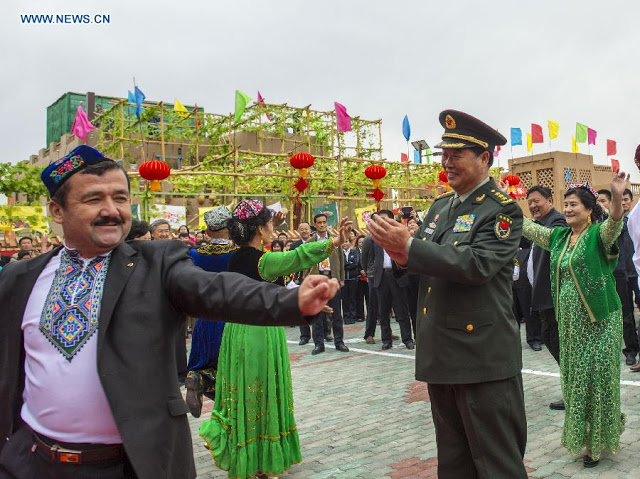 A few weeks ago, The South China Morning Post had reported the possibility of sweeping reforms in the People’s Liberation Army (PLA).

One of these changes could be the phasing out of Soviet-style command structures which would be replaced by a US-style model.  the Hong Kong daily had further mentioned that the PLA’s seven Military Areas Command (MAC) could be merged into four only.

Till now, this was speculations only.

But this week, a Chinese military newspaper has openly called for the PLA to learn from the joint command system used by the US.

the PLA’s outdated structure was the biggest obstacle to developing President Xi Jinping’s vision of a modern army capable of defending the country and leading it to victory.

The South China Morning Post quoted a Beijing-based retired major general Xu Guangyu: “The article is so far the most explicit statement by a military news outlet to highlight the need to learn from the Western model.”

Another analyst, a PLA senior-colonel noted:

It is almost certain the seven military commands will be remodelled [into] four, the air force and navy will be expanded, and some military departments and institutions will be integrated or even scrapped. …But it’s foreseeable that such a big step would face strong resistance inside the army as many senior officials would be required to hand over powers.

Zhongguo Guofangbao attributed the US victory in the first Gulf war to its ‘C4ISR’ systems (computerised command, control and communications; intelligence, surveillance and reconnaissance), saying that this was the model the PLA should follow, though it warned, “the overhaul would not only aggravate some existing disputes [within the PLA] but could also raise new problems. …[But] we should not stick to yesterday’s paradigm when considering tomorrow’s warfare.”

Is it possible to make an omelet without breaking eggs, asks the French proverb.

Other reforms are in the pipeline.

As I already mentioned on this blog, during the September Grand Parade on the Tiananmen Square, Xi Jinping announced a 300,000 troops cut in the PLA (70 per cent of those cut would be officers in the land force).

Other ‘reforms’ are in preparation.

Earlier this week, The PLA Daily said that the State Council and Central Military Commission (CMC) have approved a pension and insurance scheme under which all veterans decommissioned since last October would receive a one-off subsidy based on length of service. Local authorities would help them find new jobs and provide financial support.

Another big change is the large scale entry of the private sector in the development and production of military equipment and weapons. For the purpose, the license requirements for private companies to enter the defense sector will be greatly eased.

The Beijing-based Economic Daily said that the State Administration of Science, Technology, and Industry for National Defense of China recently released an updated catalog of military equipment and weapons that require a license for production or development.

WantChinaTimes, a Taiwanese website wrote: “The number of categories that require a license has been streamlined and reduced from 1,988 in the previous edition of the catalog, published in 2005, to 755.”

Xinhua also announced that China will recruit more civilian personnel who could play a role within the PLA and the People’s Armed Police Force (PAPF): “The spouses and offspring of military personnel who have fallen in the line of duty, and the spouses of those still in service will be eligible to apply for certain posts.”

The news agency added: “More positions will be made available for candidates with relevant work experience. It is hoped that the drive will improve recruitment in remote areas and unpopular positions.”

Many more changes are in the offing.

The entire Tibet in Chengdu MAC

Let us come back to the reform on the MACs.

When General Zhang Yang, a member of the Central Military Commission (CMC) visited Ngari (Western Tibet) after ‘celebrating’ the 50th anniversary of the so-called Tibetan Autonomous Region, he was accompanied by Lt. Gen. Xu Yong, commander of the Tibet Military District.

This surprised me as Ngari falls under the jurisdiction of the Lanzhou MAC, while General Xu is posted in the Chengdu MAC.

Before departing for Ngari (the Ladakh and Himachal border), Lt Gen. Xu Yong said in Lhasa that after 50 years of vicissitudes, thanks to the region’s rapid economic development and social progress, the living standards of the masses have markedly improved and social stability has overall been sustained: “During these 50 years in the same boat, the troops stationed in Tibet and police staff always depended on the Party’s to write the bloody battles to defend Tibet, carve a new chapter the history of Tibet.”

Which ‘bloody battles to defend Tibet’ is General Xu referring to, is not clear.

However, Xu Yong lavishly praised his boss, CMC’s Chairman Xi: “All the troops stationed in Tibet and police officers must resolutely obey the Central Military Commission and Chairman Xi command.”

More importantly, why was Xu in Ngari?

It can only be seen in the context of the reorganization of the MACs.

Could Tibet, i.e. the border with India, be regrouped under one MAC only (Chengdu?) instead of two presently.

It is what the presence of Lt Gen Xu Yong seems to indicate.

And militarily, it would make sense for China.

A couple of weeks after General Zhang Yang’s visit to the Indian border in Ladakh, one of his colleagues of the all-powerful CMC, General Zhao Keshi, head of PLA’s General Logistics Department attended the commemoration of the 60th anniversary of the founding of the Xinjiang Uyghur Autonomous Region.

He accompanied Yu Zhengsheng, Chairman of the Chinese People’s Political Consultative Conference (CPPCC) and member of the Politburo’s Standing Committee (No 4 in the Party).

Though General Zhao met senior military officers from the Xinjiang MAC, the Xinjiang Division of the PAPF and Xinjiang Production and Construction Corps (XPCC – an economic and semi-military organization), he did not go to the border.

During the same meeting with the troops and officers, Yu spoke of a ‘protracted war’ against terrorism, but nothing about the border with India (it was soon after the Burtse incident).

Instead of visiting the Ladakh/Aksai Chin area, falling under the Xinjiang Military District of Lanzhou MAC, General Zhao Keshi went to Turpan, in Xinjiang’s northwest to meet the ‘local residents’.

Reuters, quoting The PLA Daily, says that the PLA in Xinjiang are at the ‘centre of the storm’ when it comes to fighting militants and separatists: “Their job is more than just fighting,” said the article, “pointing to the thousands of activities they have arranged in the last five years going into villages to ‘explain the party’s ethnic and religious policies … and refute rumours.”

It is certainly not an easy task to force Communism down the Uyghurs’ throats.

This could be one more reasons why Beijing is thinking of bringing the entire Tibet under the same MAC? We may not have to wait too long to know if it is Xi’s intention.