Beyond Cartographic Assertion: A Roadmap on Pakistan Occupied Kashmir

Most of India’s geopolitical vexations stem from a contested northern periphery, entailing disputes born either in the aftermath of independence or inherited from British rule. Principal among these is the region of Pakistan occupied Kashmir (PoK), part of the erstwhile princely state of Jammu and Kashmir (J&K). Soon after independence, a huge portion of J&K’s territory was bifurcated from the rest of the princely state as a result of the Pakistan-aided assault conducted in these regions during 1947-48.

Pakistan-occupied Kashmir (PoK) refers to those parts of the erstwhile princely state of Jammu and Kashmir (J&K) that continue to be under Pakistan’s control. It comprises the so-called ‘Azad’ Jammu and Kashmir (‘AJK’), and Gilgit Baltistan, which latter was referred to as the Northern Areas by the government of Pakistan until 2009. India stakes a claim on these territories by virtue of the Instrument of Accession signed by Maharaja Hari Singh on 26 October 1947. 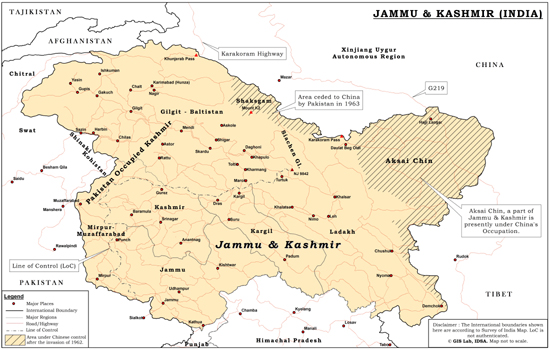 In consonance with India’s official position on J&K, the Survey of India map, considered the official and by far the most authentic source of determining India’s geographical extent, shows PoK (as it existed during British rule) as part of the Indian state of J&K and thus as an integral part of India. Apart from PoK, the Survey of India map also shows as Indian territory the Trans-Karakoram Tract (previously part of PoK) and Aksai Chin, both of which are currently under China’s control.

In May 2016, the Government of India unveiled the ‘The Geospatial Information Regulation Bill 2016’ in order to “regulate the acquisition, dissemination, publication and distribution of geospatial information of India which is likely to affect the security, sovereignty and integrity of India.”1

According to the bill: “Whoever disseminates, publishes or distributes any geospatial information of India in contravention of section 4, shall be punished with a fine ranging from Rs. 10 lakhs to Rs. 100 crore and/or imprisonment for a period up to seven years.”2

Further, for such dissemination or publication or distribution of geospatial information of India outside India were to occur, a hefty fine “ranging from Rs. 1 crore to Rs. 100 crore and/or imprisonment for a period up to seven years” is proposed.3

Once enacted as law, the proposed bill will make it mandatory to obtain permission from a government authority before acquiring, disseminating, publishing or distributing any geospatial information of India including the cartographic depiction of J&K. 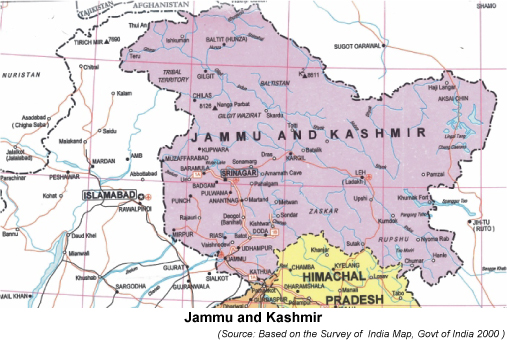 The proposed legislation caused considerable domestic opposition, which threw into question its feasibility and future prospects. Even as the domestic debate was shaping up, India-Pakistan bilateral atmospherics were fuelled by this new “stress-point”.4

Pakistan raised the ante against the proposed Indian legislation by invoking the issue at the United Nations. It alleged that “the official map of India has been depicting the disputed territory of Jammu and Kashmir as part of India which is factually incorrect and legally untenable.”5

Terming the legislation as a violation of international law, Pakistan’s note to the UN General Secretary urged the holding of a plebiscite to determine the future of J&K. India’s response was one of downright rejection and questioning of Pakistan’slocus standi for challenging a domestic legislation within India.

Interestingly, about two years ago in May 2014, Pakistan’s National Assembly had passed a similar bill “The Surveying and Mapping Act”, to regulate geospatial data and designated the Survey of Pakistan as the nodal agency in this regard. The Survey of Pakistan map shows J&K (within India) as part of Pakistan, captioned “disputed” however. But it does not include the Aksai Chin area.6

India is not known to have objected to either Pakistan’s geospatial legislation or its official map.7 In February 2015, exercising the powers conferred by the above act, Pakistan’s federal government came out with Surveying and Mapping Rules 2015, which was published in the Gazette of Pakistan in March 2015.

In the light of the Indian geospatial legislation, the amount of political capital attached to it domestically and, more significantly, Pakistan’s objections to it, this policy brief avers that India needs to extend the ambit of its official claim on PoK beyond mere cartographic assertion. In the emerging geopolitical environment, the cartographic inclusion of areas that legitimately form part of India, i.e., the entire erstwhile princely state of J&K, needs to be taken up in a forthright manner as a policy measure to seriously establish India’s claims on PoK. Calculated pro-activism on PoK could bolster India’s position on Kashmir both in formal negotiations as well as backchannels talks.

Key developments in India’s close proximity augur compounding geopolitical challenges. The strategic bonding between Beijing and Islamabad is expanding into the economic realm through the extensive connectivity corridor to be built across PoK, which throws into starker relief China’s growing commitment to and presence in Pakistan. Concurrently, the recent spurt in violence in J&K has amplified the gravity of the situation. It is well known that the problem of J&K has reached this level because of unstinted and unabated Pakistani support to the separatist constituency over the years. Pakistan’s support has catalysed the situation and kept the issue on the boil. The internal politics within J&K has not been too encouraging all these years to ward off such persisting Pakistani machinations.

This does not bode well for both India and the Kashmiris. India has dealt with Pakistan’s obsession with Kashmir for decades. However, despite Pakistan’s weak claims on Kashmir, it has managed to whip up popular sentiment against the Indian state, on the one hand, and the popular political leadership in Kashmir, on the other. The energy and verve with which Pakistan has successfully sustained its propaganda on Kashmir for decades has been complemented by lack of foresight and adaptation to changing circumstances on the part of policy makers in India.

While India continues to weather Pakistan’s asymmetric assaults rather tamely, it needs to be bold and innovative in its approach, and reassert its genuine claim on PoK rather than adopt a defensive stand. Claiming PoK can potentially be an antidote to Pakistan’s unfounded but aggressive claim on Kashmir. Additionally, rebooting the claim on PoK can reinforce India’s position against the China-Pakistan strategic and economic partnership (involving PoK) in the near and long terms. A rethink involving the raising of the PoK issue can be effective when India sets out recalibrating its political and strategic measures to safeguard its core geopolitical interests vis a vis Pakistan and China.

Ever since the Maharaja of Jammu and Kashmir State signed the Instrument of Accession, India’s position on J&K, and on PoK in particular, has remained largely unaltered. The Indian position on PoK has been articulated intermittently, but in a rather mild way. India’s claims on PoK have not been as strident as it ought to have been. True, the Parliamentary Resolution of 1994 was an emphatic re-statement of India’s position on PoK, urging Pakistan to vacate areas under its illegal control. But such assertions have not been backed by astute and assertive repositioning at the diplomatic and policy-making levels, leading to the general impression that India is resigned to the idea of losing the territory to Pakistan and settling for the Line of Control as the border.

Re-calibrating the Indian approach towards PoK will require shedding policy hesitation on PoK, minimizing contradictions and addressing gaps in policy pronouncements. This may require an overhaul involving a multi-stage strategy to shift the discourse on PoK from the cartographic domain to the policy domain. To begin with, the following measures could be considered for implementation in the domestic, external and ancillary levels.

A purposeful strategy on PoK will require a certain basic course correction — one that situates the region in the popular imagination in India and bridges the knowledge gap in the country about a region which legally belongs to it. In the absence of a concerted course correction, no breakthrough on formulating an ambitious and focussed strategy on PoK will be possible. The primary goal here should be to alter domestic perceptions and political complacency on PoK.