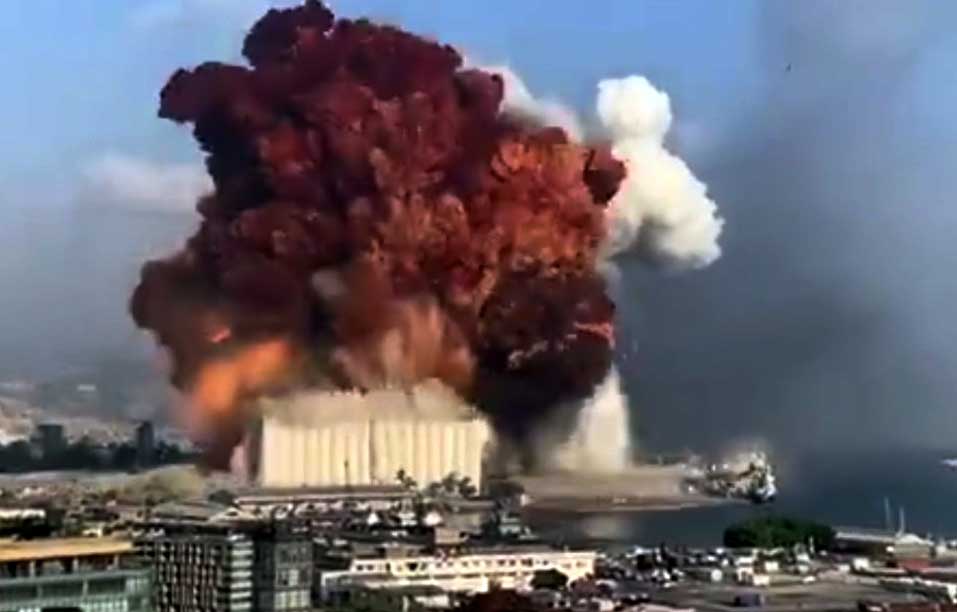 Destruction and confusion prevailed as twin gigantic explosion rocked Beirut with Lebanon in the grip of major political and economic crises exacerbated by the COVID-19 pandemic. Videos and pictures on social media from the scene showed an initial explosion, with a big ball of smoke followed thereafter by a much larger secondary explosion resulting in a huge fireball and shockwave.

Lebanese Health Minister Hamad Hassan said that a ship carrying fireworks caught fire and exploded in Beirut Port area which is very close to the centre of the city.  The explosions generated a seismic wave equivalent to a magnitude 3.3 earthquake.  As of now the 157 persons have died and 4,000 injured while 3,00,000 have been rendered homeless with their houses destroyed.

The explosions blew out windows 20 kilometers away,  destroyed properties around and noise of which was heard in an island 240 kilometers away. The source of the explosions was eventually tracked to an unsecured warehouse in Beirut’s cargo port holding 2,750 tons of ammonium nitrate since 2014.

This generated doubts about possible Israeli involvement in the explosions especially after Israel’s air campaign in Syria that includes targeting arms depots and convoys used by Iran to ship weapons across Syrian territory to Hezbollah. Israel could have destroyed the warehouse through many means – aerial and even sabotage just as there have been many explosions at nuclear sites, ballistic missile factories and power plants in Iran. However, both Israel and Hezbollah recently made clear that neither wants war. Hezbollah’s 150,000 rockets aimed at Israel are also a powerful disincentive.

Amidst Beirut’s immediate crisis is shelter for the homeless, health, overwhelmed medical services  issues complicated by the corona pandemic and destroyed property and businesses. With sympathies and relief material pouring into Beirut from around the world including from Israel, Lebanese Prime Minister Hassan Diab announced it was unacceptable that such a volume of the explosive chemical had been present for six years in a warehouse without any “preventive measures.” Most Port Officials have been placed under house arrest. He has given five days to investigating agencies to name the culprit (s).

Ammonium nitrate is produced in large industrial quantities world over. Its primary use is as fertilizer for agriculture given its source of nitrogen. At the same time, it is also used in mining activities for creating explosions. There have been industrial accidents in the past which indicate storing ammonium nitrate especially for long durations without due precautions can be hazardous. Long duration storing decays ammonium nitrate and increases chanced of it getting contaminated by absorbing moisture and oil that turns it into rock.

Importantly the fact that it is easily available globally, is cheap and has explosive qualities makes it handy for use by terrorists by itself or mixed with other explosive agents.

Major industrial accidents involving chemicals include: 500 persons plus killed in 1921 in Oppau, Germany when 4,500 tons ammonium nitrate exploded in a plant, and some 581 persons killed when more than 2,000 tons of chemicals on board a ship detonated in Galveston Bay, Texas (US) in 1947.  Remember the ramming of USS Cole by an explosive laden fibre glass boat killing 17 US sailors and injuring 39 in year 2000, for which Al Qaeda claimed responsibility? What explosives Al Qaeda used is not known but it could have been ammonium nitrate.

The explosion in Tianjin Port City in China that killed 173 people on August 12, 2015 is also attributed to ammonium nitrate by some, whereas Western media described it an act of “kinetic retaliation” by the Pentagon in response to China’s currency war of Yuan devaluation; Pentagon’s space-based kinetic weapon ‘Rod of God’ that can be dropped from high orbit to strike almost any land-based target.

Ammonium nitrate can be configured easily into a truck bomb. Many terrorist have used this chemical in the past including in the Oklahoma City bombing during 1995 where two tons of ammonium nitrate was used killing 168 people and destroying a federal building. In the instant case of the Beirut Blasts the reason for the second blast and the orange-red mushroom cloud caused by the explosions are under discussion. US President Donald Trump even described the Beirut explosions as “bomb of some kind” citing US Generals who he did not name.

At the same time, ammonium nitrate cans also combust when met with an intense fire, which according to some “appeared to be burning” in a part of the Beirut port before the huge explosion – but was this the case? As for the red-orange coloured mushroom cloud one explanation is that exploding ammonium nitrate releases toxic gases including nitrogen oxides and ammonia gas and the orange plume is caused by the nitrogen dioxide, which is often associated with air pollution. That may make the Beirut explosions not appear to be a deliberate act but can we really discount that with part of the humanity gone crazy – China’s biological attack on the  world and terrorists, state-sponsored or with ideological objectives including ‘lone wolf’, looking for new ways to cause massive destruction?

Terrorist are consistently developing new types of explosives experimenting with commercially available products like fertilizer (ammonium nitrate) and chemicals, coupling them with radioactive like material to increase the destructive power. Media reports had earlier cited US intelligence believing Al Qaeda has devised a way to conceal explosives inside the body that can avoid detection by sophisticated scanners. They also claimed Al Qaeda has developed an undetectable liquid explosive that can be soaked into clothing and ignited when dry.

Terrorist organizations, particularly the Islamic State were known to be  developing CBRN capabilities, assisted by fissile material available in the black market. Toxic radioactive agents can be paired with conventional explosives and turned into a radiological weapon.  Pilferage of fissile material is nothing new. Recall a whole truck load of Cobalt-69 caught in Mexico during 2013.

A global analysis released on September 5, 2016 by the nonprofit Nuclear Threat Initiative (NTI) brought out that one-third of the 44 countries and Taiwan that possess weapons-usable nuclear materials or have reactors, reprocessing plants, and other nuclear facilities lack even the most basic cyber protection.

In the Nuclear Security Index of NTI, of the 44 nations and Taiwan with nuclear facilities, Finland topped the rankings in protection from sabotage, followed by Australia, Canada, Japan, and the UK. The US tied for 11th place. The NTI report brought out that since 2016, increased political instability, ineffective governance, pervasive corruption, and the presence of terrorist groups have elevated threats in almost the same number of countries as those that have lowered their risks, the report said. “We are racing the clock to prevent an attack with catastrophic consequences”.  NTI CEO Ernest Moniz highlighted that in the aftermath of the 2016 suicide bombings of the Brussels airport and subway, authorities’ uncovered evidence of a well-organized effort by terrorist groups to obtain nuclear and radiological materials.

The Beirut explosions have once again highlighted the explosive properties of ammonium nitrate. Whether it was a bomb of some kind (Israeli sabotage?) or an experiment by Hezbollah that went wrong may never be known especially if the perpetrator(s) perished in the explosions. But chances are that these types of terrorist attacks may see a spurt world over including South Asia where India and Afghanistan could be prime targets.

Of still greater concern should be terrorist using fissile material in conjunction ammonium nitrate or other chemicals in a radiological bomb whose destructive power will be enormously more. This danger magnifies more when rogue countries like China and Pakistan would have no compunctions about providing fissile material to terrorist organizations if the finger does not point directly at them. Darker days lie ahead.