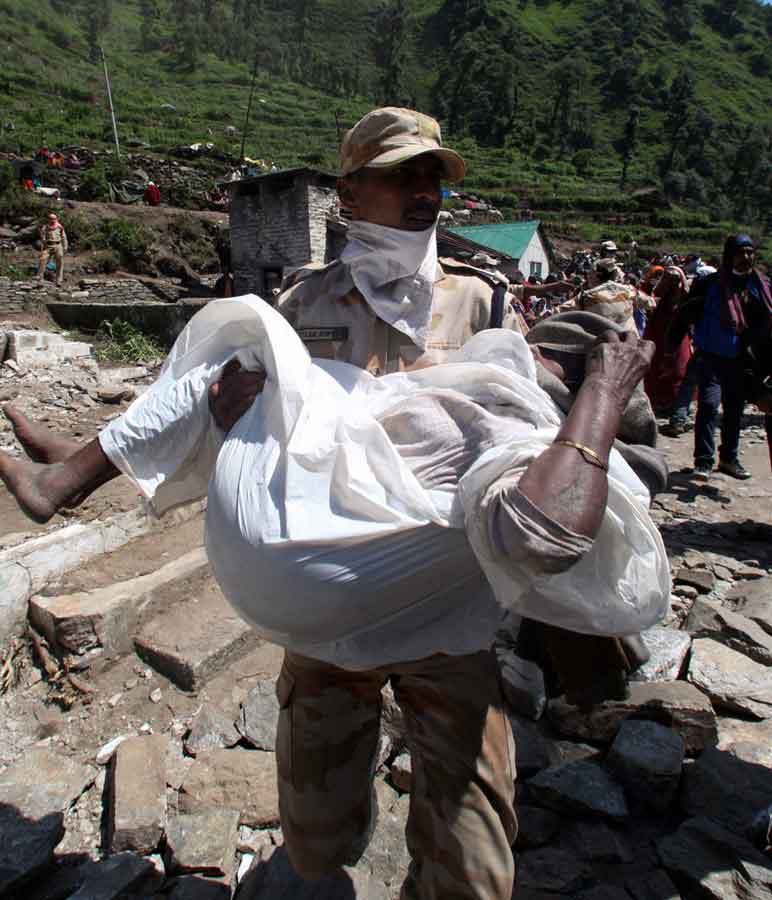 It is now nearing a month since disaster struck the upper reaches of Uttarakhand, unleashing nature’s fury and shattering the lives of thousands of pilgrims and local people. The number of missing presumed dead and those confirmed dead is around six thousand and this figure could increase. While the pilgrims have reportedly been evacuated, life for many residents of villages not approachable on foot is precarious. The army is trying to build a new approach road to Kedarnath and the Indian air force and others continue to support the civil administration in its relief efforts.

If this huge loss to life and property does not make the nation reflect on its approach towards mitigating and managing disasters, what will?

If this huge loss to life and property does not make the nation reflect on its approach towards mitigating and managing disasters, what will? In this endeavour, what we should avoid are instant judgments that are the staple of electronic media debates and the temptation to fall back on ill-conceived remedies, the staple of poor governance.

Unfortunately, the signals so far do not give cause for optimism. Already, without an insight into the causes and an objective analysis of these, the state authorities appear to be on a spree of issuing policy initiatives. It is possible that having been caught flat-footed when disaster struck, they now want to be seen as proactive in order to soothe adverse public sentiment. This may be politically expedient, but the scale of the tragedy demands a more sombre and measured response.

This first entails an examination of every facet of this tragedy and then drawing lessons which, when implemented, will prepare not just the state, but also the nation, for the next disaster. That another disaster will strike the state is not really in doubt considering the fragile mountains prone to landslides, tectonic activity and climatic events, compounded by the huge influx of pilgrims and tourists during the appropriate season.

In a way, the state is only following the Centre, which, having enacted the Disaster Management Act, 2005, had come to believe that a large enough bureaucracy, housed in imposing offices in New Delhi and supported by a generous budget, will somehow ensure that natural or man-made disasters will now be taken care of. The thought that effective disaster management is an operationally driven rather than an administratively driven management challenge escaped our policy-makers.

With specific reference to Uttarakhand, the CAG report pointed out that a state disaster management authority was formed in October 2007, but had failed to meet or formulate any rules, regulations, policies or guidelines.

The national disaster management authority born of this law is supposed to lay down policies on disaster management, approve a national plan and coordinate the enforcement and implementation of these. It is chaired by the prime minister, with a vice-chairman of cabinet rank and eight members of minister of state rank. If disaster management were a function of rank weightage, India could claim to be one of the best in business. The reality was exposed two months before disaster struck, when the comptroller and auditor general’s report on the performance audit of disaster preparedness in India was tabled in Parliament. The executive summary notes said that “the NDMA, which was conceived as the apex planning and supervising body, was found ineffective in its functioning in most of the core areas”. The report noted that the national executive committee, which coordinates disaster response on behalf of the NDMA, had met only three times in seven years instead of once in three months as mandated. The lack of a disaster management plan at the national level had a trickle-down effect on the states as they had no frame of reference to base their own plans on.

With specific reference to Uttarakhand, the CAG report pointed out that a state disaster management authority was formed in October 2007, but had failed to meet or formulate any rules, regulations, policies or guidelines.

When five days after tragedy struck the home minister admitted that there had been a lack of coordination between government agencies engaged in rescue operations, it seemed a cruel joke. To add insult to injury, he announced the appointment of an NDMA member to coordinate relief and rescue. He was an erstwhile home secretary whose very office had come under the CAG’s adverse criticism. This irony escaped the home minister.

Once the IAF swung into action, it realized that a massive air effort would be needed with the corresponding need for fuel. It came to know of the Dharasu and Gaucher airstrips, not through the state authorities but through Google search, and then flew in fuel bowsers to Dharasu in their giant Mi-26 helicopters and used C-130 aircraft shuttles as fuel tankers. This improvization laid the foundation for perhaps the biggest airborne rescue and relief operation in the country involving helicopters of the IAF, army and civil operators. But time and lives had already been lost.

The question that follows is, why is it that every time disaster strikes, we are caught off guard and it is left to the armed and paramilitary forces to pick up the slack?

Disasters by their very nature come without warning, with each being unique in its challenges and impact. And it is not just natural disasters that we must contend with. We could have the likes of the Bhopal tragedy and we have nuclear power plants that could meet with accidents or even a hostile or terrorist attack. Our nuclear doctrine of “no first use” expects the nation to absorb a nuclear strike and still have the moral fibre to retaliate massively. These are not improbable scenarios, but clearly we are unprepared either in our understanding of the challenges or, worse, in our preparation and potential to handle them.

Invariably it is the first response to a disaster that will set the tone for the way events unfold and the first priority will always be search, rescue and containment, if possible. The reality is that the only institutions in our country that can respond to such a challenge with speed are the armed forces and the paramilitary ones. This is not in any way meant to underplay the role and contribution of the many civil institutions and the civil administration, but only to emphasize that the effective initial response must be akin to that of a response to a surprise attack by the enemy. This needs unity of command, professionalism, teamwork, continued training to hone personal and man-machine interface skills coupled with a sense of willing sacrifice that is the essence of any military operation. That is why there is a need to review our very approach to disaster response in the vital initial stages and integrate within the system the armed forces and unambiguous unity of command.

As a first step there is need to set up an independent commission that will evaluate the unfolding of the Uttarakhand disaster and the response and performance of those involved. An essential element of this investigation must be a performance review of the NDMA’s and SDMA’s roles covering essentially the preparedness, response and recovery phases of this disaster. That there will be many lessons is not in doubt. One hopes that the nation will then put in place organizational and management reforms with the sole purpose of having come out stronger from this tragedy. If we do this in the right spirit, the thousands of lives lost may not have been in vain. If not, many more citizens will be the next victims.