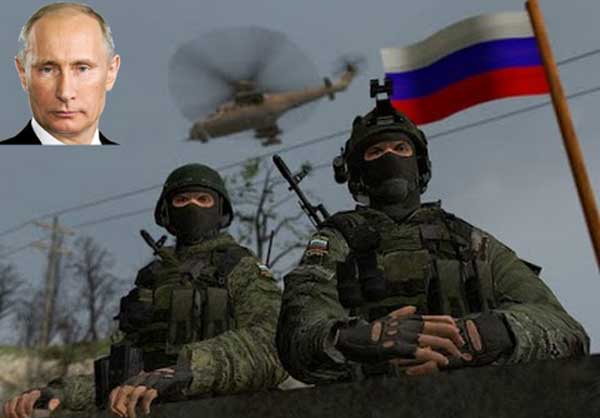 Russian military intervention in Syria started around September 2015, after an official request from the Syria’s Bashar Al-Assad government. A revanchist Russia, even with a stagnated mono-industrial economy surprised the international community with the pace of attack and will to sustain the operation. It is important therefore to study and have a clear idea of Russia’s military strategy, objective, goals, and operational tactics, as geopolitical dynamics of Europe and Asia is changing rapidly.

Russian operational strategies show signs of awareness of relative weakness compared to Western forces. Russia understands its lack of manpower, and is therefore committed to theatre level strategy, which intends to cut off important stretches of defensible land, rather than whole country wide area dominance, as evident from heavy handed Russian effort to secure Aleppo. Russia lacks the edge of precision guided weaponry, as well as extensive ground troops and intelligence network, and therefore relies on two things. A low-cost defense of Government held areas, and a high labour intensive operational tempo in rebel areas. Fixed wing aircraft with unguided bombs are used for this rapid devastation approach, including controversial “double tap” bombings, that is bomb runs on an area twice, as a mop up operation. [ii]

The problem in this operation and use of unguided bombs, is Russian air force cannot work regularly as a close air support in coordination with Syrian forces or Iranian forces. Here the operational tactics closely resemble, Russian air and artillery operations in Grozny and Georgia. This lack of ground-air coordination is also the reason for the high attrition rate and operational delay of Syrian government forces to recapture and most importantly hold territory, as compared to the Allied advance in Afghanistan during 2001 and Iraq 2003. The only operational support Russian air force is providing are to the Syrian special forces, with MI-35 Hind rotary wing crafts hovering above slowly, providing rapid fire dominance during mop up operations in urban areas. In those times, they are effective, but economically unsustainable in the long run.

There is however one simple advantage evident, and that goes back to the history of warfare. It is a common military joke that the Russian tactic of neutralising a lone sniper in a building is to level the whole building down. There is some truth in that, as evident from the Russian indiscriminate bombing of civilian areas, not unlike the operational doctrines of second world war. Russia acknowledges the lack of precision munitions, and as opposed to current Western war doctrines which includes careful consideration to avoid or minimise civilian death, Russia can engage in wilful and indiscriminate bombing and theatre domination, not unlike Allied bombing campaign in Dresden during the Second world war. Russians have adapted a minimal version of Shock and Awe, and adapted it to their capabilities. The only difference is the Shock and Awe was a massive bombing campaign, but its primary target was military and therefore did not affect the morale of civilian Iraqis much, who reportedly went on with their daily lives. Russian bombing in Syria however, has proved to be significantly demoralising to the Syrian population in rebel held areas. If one carefully goes back to the war logic from antiquity, wars are primarily psychological domination of the will of the adversary. In that narrow regard, Russians are quite successful, despite heavy international criticism. [iii]

This is corroborated in the latest analysis of Russian defense sectors, and commentators. Russians have acknowledged that they are militarily weaker than the West.[iv] Despite that, they have had stunning battlefield successes and showed significant aggression in Georgia, Syria and Ukraine. Scholars have attributed it to the thinking that Russians acknowledge that there will be massive casualty and therefore show no signs of trying to minimise or slow down any operation. Nor do they much care about human rights and civilian casualties, as Russian operational model states that there will be significant collateral damage when a Great power wages war, and therefore there is essentially no need to slow down and delay the inevitable.

Secondly, Russians have assessed that Western war model and simulations mainly include short rapid air war, and air superiority. Russians also acknowledged that they have not faced any significant challenge, in either Syria or Ukraine, and their air force, while deadly, have their limitations. In a serious war with another Great power or even medium sized powers, or in the face of determined well armed pushback, they will not have any air superiority, much less area dominance. Russian indiscriminate bombing therefore is a sign of deterrence, and a hint to the West, that in case there is a conflict in East Europe, and provided it stays below the nuclear threshold, Russians will resort to indiscriminate bombing, and ratchet up aggression, even in civilian areas to a level which will be highly costly for the West.

With the heightened security dilemma in Eastern Europe, with American forces returning to Poland, and Cold War Part 2 starts to take proper shape, the conclusions that can be drawn are these. Russia remains significantly weaker militarily, but is heavily willing to use force, and use escalatory dominance as a deterrence measure, precisely because it remains comparatively so weak. Russia is also without an exit strategy in Syria and is therefore present for a long haul. A lot depends on the state of Syria after the conflict ends, but if one assumes that the Russian client in Assad will remain in some shape or form, it is prudent to expect some kind of Russian permanent presence to safeguard it. As of NATO and the West, the primary objective would be to contain the security dilemma spiral in East Europe. Chances of conflict with Russia are unlikely, especially with the new administration in the US and problems within European Union, and Russian reliance on asymmetric warfare and Intelligence subterfuge; but if genuine conflict breaks out, the NATO and the West need to understand that the current rules of minimising civilian casualties will not apply, and there will be extreme collateral damage, with every possibility of any conflict going over the nuclear threshold. [v]

[iv]Read,”The Restart of History and the Russia Question”, Nov 10, 2016, Quillette Magazine (http://quillette.com/2016/11/10/the-restart-of-history-and-the-russia-question/); ‘Was Putin Ever Friendly to the West?’: An Expository Study of the First Two Terms of President Vladimir Putin, In Light of the Theories of Realism (March 15, 2016). Journal of International Relations, Faculty of International Relations, University of Economics in Bratislava 2016,  Available at SSRN: (https://ssrn.com/abstract=2747764).

One thought on “Assessment: Russian Military Strategy, Operational Tactics and Objective in Syria”