The challenges faced were many, acute and diverse. Never before had submarine design, even of a conventional type or a specialized nuclear reactor capable of operating in the ocean environment, been seriously attempted in India. The submarine hull and system design was taken on by the Navy’s in-house Design Bureau. This task was entrusted to Rear Admiral Raj Chaudhry, who had a competent team, theoretically trained in USSR, UK and Germany. This being their first practical assignment, was the main handicap. Being from such diverse design backgrounds, the first task was to bring them all on to the same grid. Reconciling the differences in design concepts was itself a herculean task. The USSR believed in double hull for their submarines. The western countries, on the other hand, believed in single hull designs. The design codes/coefficients/softwares, etc were exclusive and specific to each. Since design was being validated by the special consultants, the single hull design choice had, perforce, to be put on the back burner, for the moment. 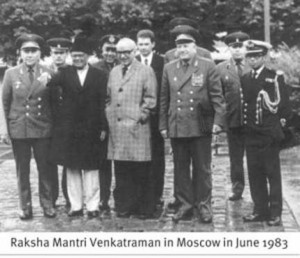 The primary system design for the propulsion unit was equally challenging. The only saving grace was that the scientists and engineers with the Department of Atomic Energy (DAE) had acquired considerable expertise in the field of indigenous design and development of nuclear power plants ashore. In this case, the criteria of compactness to fit into a submarine hull, and the need to safely function from a mobile platform, which is rolling, pitching, operating under steep trim conditions, along with crash diving and emergency surfacing, etc, were all conditions necessarily to be met. The DAE was confident that their scientists would be able to cope with all these stringent conditions without any external assistance. Hence, initially, no design assistance was envisaged even for the unique reactor fuel core. Test and full endurance trial were planned at Prototype Test Centre (PTC) at Kalpakkam.

Primary system, up to the steam generator, design and development became the exclusive responsibility of BARC, with Naval Nuclear Engineers over-seeing the work. The down stream secondary system was entrusted to Defence Marine Engineering Design & Development Establishment (DMDE) at Hyderabad. The prototype Pressure Water Reactor (PWR) for the submarine became critical inside the submarine pressure hull capsule at Kalpakkum on 11 November 2003 and was declared operational on 22 September 2006.8, 9, 10,11

Since the indigenous industry did not have suitable test facilities, a dedicated Machinery Test Centre (MTC) was set up at Vishapatnam. For submarine building activity, an exclusive Submarine Building Centre (SBC) was created, with all facilities inclusive of the means to load and replace reactor fuel core, with the submarine along-side.12

It would be observed that, in the initial phase, ending 1989-90, when the USSR disintegrated, the ATV’s achievements were considerable. A sound foundation had been laid, with a high powered, fast track, empowered management system in place. All the requisite institutions/infrastructure were conceptualized, sanctioned and launched from abi-ni-tio, in record time. Bharat Heavy Plates & Vessels at Vizag, Larson & Tubro at Hazira, Mazagon Dock Ship Building Yard, Bharat Heavy Electrical and Bharat Electronics at Bangalore were all roped in. Full cooperation was extended by all concerned, including the Navy, DRDO, DAE and the Public/Private sector undertakings concerned, particularly in making available their best talents for the task envisaged.

Since the indigenous industry did not have suitable test facilities, a dedicated Machinery Test Centre (MTC) was set up at Vishapatnam. For submarine building activity, an exclusive Submarine Building Centre (SBC) was created

The duration for execution in our case is often perceived to be very high. As would be seen from the two instances illustrated below, that the Indian performance is comparable to any global standards. These are particularly so, taking into account the severe technology denial regime that India was subjected to and its location, at the time, on the learning curve.

The time frame in which USA was able to induct its first operational nuclear submarine could be used as a yardstick for comparison, bearing in mind that at their starting point, they had a huge industrial base and considerable experience in design, development and construction of conventional submarines.

China took more than 16 years to commission even its second generation SSN, Type 093 – in spite of its massive conventional submarine programme and their head start on the first generation nuclear submarine and extensive technological and material support from Russia.13

At the same time, it must be admitted that in the case of India, considerable improvement in time frame could have been effected, had the establishment relaxed some of the crippling internal security restrictions. Even consultation with the Navy’s own professional Directors (designated watchdogs for the Navy) was prohibited. Also, independent professional/technical audit requirements were put aside on security grounds. One CNS, on advice from his Chief of Material (COM) and Assistant Chief of Material (ACOM), in the late 80s, is believed to have exercised his ‘Nelson’s eye’ option and some informal involvement of professional Directors were made possible. That was soon clamped down with the next incumbent. Even now, it is considered not too late to review this policy.14

It is also incorrect to believe that one of the major causes of time overrun was due to the Navy not sparing officers on long term basis for this project. On the contrary, records would show that key design personnel have been allowed to be retained in the project from a Lieutenant’s rank to Vice Admiral. In filling senior vacancies, however, there is a perception, that in recent times, sufficient weightage was not being given to aptitude and commitment to the project. The emphasis has been more on not leaving any senior billets vacant. This demoralizes the team. R&D is not every ones cup of tea. The choice of Admiral Ravi Ganesh was exceptional. A former Commanding Officer of Chakra, with his experience and caliber was an ideal choice at the helm of affairs. Mid-stream changing of QRs and the devastating effect on USSR, post perestroika, also took its toll.15

The most crucial phase has only just begun. Notwithstanding the fanfare that accompanied the launching, the path ahead is not a bed of roses. All machinery would have been bench tested at the manufacturers and MTC before installment. Now, after floatation of the boat in the basin, they would need to be systematically proven singly, as a sub-system and finally as a whole, before attempting harbour trials. The Primary Reactor system will also take some time to attain the state of criticality. Only after completing the full range of Basin trials would the boat proceed, in stages, for harbour and preliminary sea trials – initially on the surface. During this process, deperming, demagnetization and extensive noise and vibration trials, etc would also be undertaken, at the designated trial stations. Thereafter, full range of sea trials would be attempted. It will include deep diving in planned stages.

Emergency, surfacing/diving and reactor shut down drills including speedy maneuver response, etc would also be exercised. This being our first attempt, break-downs and re-work must be anticipated and accordingly provided for. The weapon and sensor trials would follow, some in parallel, others during dedicated trials accompanied by supporting ships, submarines and aircraft, as appropriate. Only after all these tasks are fully met and the shipyard’s harbour and sea acceptance trials satisfactorily completed, would the boat be ready for commissioning into the Navy. Thereafter, the submarine would be put through its paces by the crew and finally worked-up with the fleet under the watchful eyes of Flag Officer Submarine (FOSM) and the Fleet Commander.

In this context, a serious case study of the loss of USS Thresher and Scorpion during the trial phase would be a worth while exercise.16

One thought on “Arihant: The Annihilator”