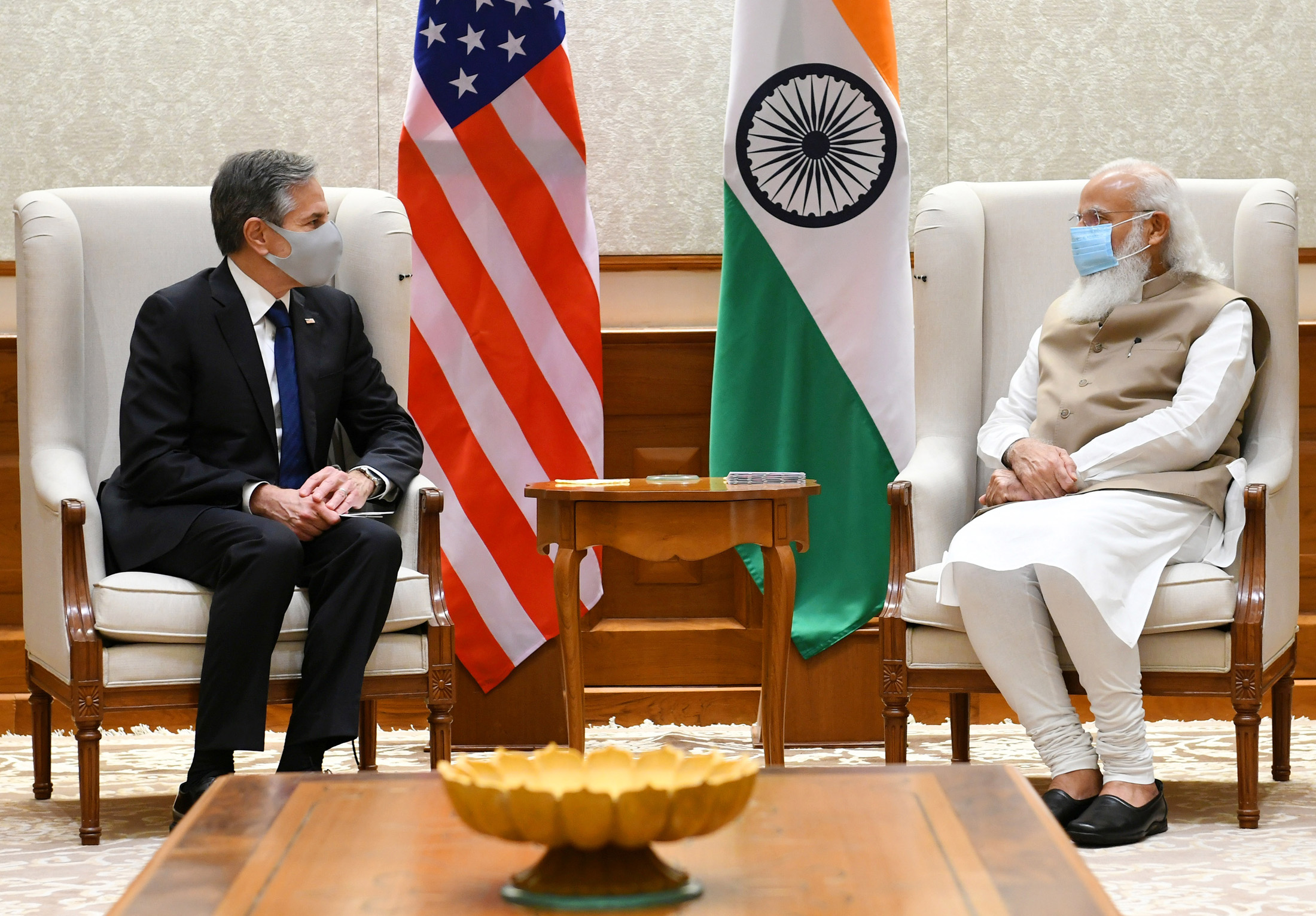 The US Secretary of State, Mr. Antony J. Blinken calling on the Prime Minister Narendra Modi, in New Delhi on July 28, 2021.

US Secretary of State Anthony J Blinken arrived on his maiden two-day visit to India on July 27. Concurrently, US State Department spokesperson Ned Price stated that: America is excited to expand the strong and growing India-US partnership, and; Blinken will be discussing bilateral relations, regional issues including Afghanistan, Pakistan sponsored terrorism, Indo-Pacific among other issues with Indian officials.

The Ministry of External Affairs (MEA) had issued a statement that both sides will review the robust and multifaceted India-US bilateral relations and potential for consolidating them further and that discussions will focus on regional and global issues of mutual interest including recovery from the COVID-19 pandemic, the Indo-Pacific region, Afghanistan and cooperation in the UN. America’s Acting Assistant Secretary for South and Central Asian Affairs Dean Thompson said that the discussions will focus on expanding ties in areas of security, defence, cyber, and counterterrorism cooperation

Blinken met civil society leaders including Dorji Damdul, Director of Tibet House in Delhi. Addressing them Blinken said, “The Indian people and the American people believe in human dignity and equality of opportunity, the rule of law, fundamental freedoms including freedom of religion and belief … these are the fundamental tenets of democracies like ours. And of course, both of our democracies are works in progress. As friends we talk about that.”  In his Meeting with Jaishankar, Blinken and Jaishankar held wide-ranging talks covering the situation in Afghanistan, Indo-Pacific engagements, COVID-19 response mechanism and ways to strengthen regional security.

At a joint media briefing, Blinken said there are few relationships in the world that are more vital than the one between the US and India, action by both countries shape the 21st century and beyond, and that strengthening partnership with India is one of the top foreign policy priorities of the US. He said there is no military solution to the conflict in Afghanistan; Taliban and the Afghan government must come to the negotiating table. He also said India has and will continue to make a vital contribution to Afghanistan’s stability and development.

Jaishankar said the talks were held at an important juncture when key global and regional challenges need to be effectively addressed and the bilateral partnership has enabled dealing collaboratively with larger issues. He confirmed challenges from the pandemic were discussed and that Afghanistan, Indo-Pacific and the Gulf region too were discussed. Jaishankar also said that the ability of India and the US to work more closely, bilaterally, in the Quad and elsewhere, benefits the international community as a whole. Blinken announced that the US will provide $25 million to support India’s vaccination program.

Blinken’s discussions with Ajit Doval were on a range of bilateral and regional issues, including the rapidly changing situation in Afghanistan, Indo-Pacific and global security. They also discussed strategic issues of importance in security, defence, economic and technology-related sectors. Both exchanged views on contemporary and futuristic issues related to regional and global security.

During the courtesy call on Prime Minister Modi, Blinken conveyed greetings from US President Joe Biden which Modi reciprocated. Blinken briefed the PM on his discussions with Jaishankar and Doval and expressed American commitment to deepen Indo-US strategic relations which includes defence, maritime security, trade and investment, climate change and science and technology. PM Modi appreciated the initiatives taken by President Biden including those related to the Quad, COVID-19 and climate change. Modi noted that the India-US Strategic Partnership will be of even greater global significance in the coming years, in the context of the challenges posed by COVID-19, global economic recovery and climate change.

Blinken also met with Ngodup Dongchung, Representative of Central Tibetan Administration (CTA) or the Tibetan government in exile. It may be recalled that in November 2020, Lobsang Sangay, the former head of the Tibetan government in exile, visited the White House and in December 2020, the US Congress passed the Tibet Policy and Support Act, which calls for the right of Tibetans to choose the successor to the Dalai Lama, and establishment of a US consulate in Tibet’s capital Lhasa.

As was expected, Beijing went hopping mad over the Blinken-Dongchung meeting. China’s foreign ministry spokesman Zhao Lijian said that Tibet affairs were purely China’s own affairs and should not be interfered with by any outside forces. Responding to a question Lijian said, “The 14th Dalai Lama is not a mere religious figure, but a political exile who has long engaged in anti-China separatist activities and is trying to separate Tibet from China.”

In an interview with an Indian daily on the US State Department website, Blinken expressed concern over India’s agreement with Russia to import Russian S-400 anti-aircraft missile systems. He said, “Well, we have – we have our laws.  We’ll – we apply our laws, but we shared our concerns with India about this.  But I’m not going to get ahead of myself.  We’ll see how things evolve in the coming months.” Russia has confirmed that the first batch of the S-400 will arrive in India by the end of 2021.

The periodic bullying of India by US officials under the ‘Countering America’s Adversaries ThroughSanctions Act’ (CATSA) for importing S-400 missile systems ex Russia is quite ridiculous and certainly not in the interest of growing India-US strategic partnership. Surely the US should not expect India to make all defence purchases from the US given that the US State Department statement that the US is selling over US$ 20 billion to India.

In exiting Afghanistan, the US included India in negotiations only last minute and is giving preference to Pakistan in other multilateral forms on connectivity related to Afghanistan and Central Asia. Western scholars opine that US troops are exiting Afghanistan and Iraq because the American focus has shifted to East Asia and the waters of Indo-Pacific.  At the same time, it is no secret that dim-witted policies of successive US administrations ‘permitted’ China to militarize the East and South China Seas. India is important to America for conflict with China on the high seas but India shares a 3,448 km unsettled border with China. How much is the US bothered about this beyond selling defence wares? What about Capitol Hill continuing to mollycoddle Pakistan – the crucible of terrorism responsible for most, of not all, American deaths in Afghanistan?

What should one conclude from the visit of Anthony Blinken and what can or should be the future trajectory of Indo-US strategic partnership.? Blinken’s visit apparently was more to ‘reassure’India from the adverse fallout of the accelerated exit of US troops from Afghanistan. But stating that Afghanistan will become a ‘pariah’ state under Taliban and that India has a major role to play in Afghanistan is glib talk which was known all along. The rapid gains made by Taliban’s offensives are no surprise either. What the US failed to do in 20 years in Afghanistan is to subjugate the Taliban enough to stitch a US-Afghan-Taliban peace deal, not the US-Taliban deal to protect own tail and run off. Moreover, nothing was done to plug the arms supply to Taliban in 20 years because that would have exposed the CIA and Pakistan-China as well.

As of now the US can do little to help protect Indian interests in Afghanistan especially because of adverse US-Russia and US-Iran relations. Besides, the US is demonstratively continuing its bonding with Pakistan because of which it will never support ‘One India’ and will use Kashmir as a pressure point against India. US would want India to: align with US national interests; open up all sectors for the US including defence, IT, communications and space; restrict defenceimports from other countries; go active in support of America’s new Tibet policy; join Joe Biden’s ‘Build Back Better’ (B3) Initiative; activecollaboration in the waters of Indo-Pacificincluding as part of the Quad, and; sign a defencepat with the US – which India will unlikely do.

Many analysts opine that if India is threatened across the Himalayas, the answer is to counter China at sea. While this is good in theory, what is the scale of conflict we are looking at and who will take the counter action at sea and at what would be its mechanics where vessels (naval, merchantand civil) from all nationalities are present or transiting in hundreds? Of the Quad members, the only one sharing land border with China is India and recapturing territories lost in mountains and high altitude requires many times more the effort? So, India should be very clear what foreign assistance, if at all, is likely in a limited conflict with China.

Finally, the future trajectory of the Indo-US strategic partnership must include the following: set benchmark for collaboratively (Quad and allies included) to outpace Beijing in the technological race to drive home that China will be the biggest loser in conflict; set the tone for balkanizing China and assist its implosion.

One thought on “Anthony Blinken’s Visit – and future Indo-US trajectory?”