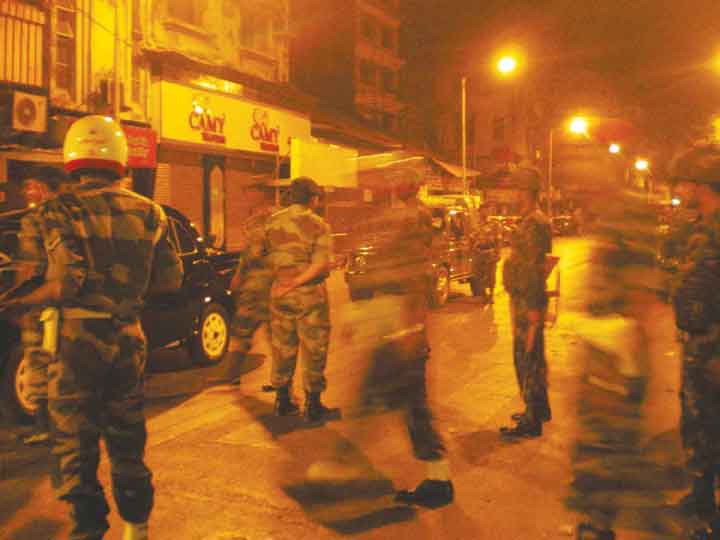 In endless, hushed stakeout in the deserted streets of Colaba by the police, paramilitary troopers, army soldiers and commandos outside Nariman House is broken by the arrival of Major General R K Hooda, General Officer Commanding, Maharashtra, Goa and Gujarat area, in the middle of the night, November 27. (Photograph: Vaihayasi Pande Daniel/rediff.com)

Ansari is presently under interrogation by the Indian authorities. It is likely that the interrogation is being carried out by a joint team headed by the Multi-Agency Centre (MAC) of the Intelligence Bureau and consisting of officers of the Federal Investigation Agency, and the Mumbai and Delhi Police.

Ansari is a much more important catch than Ajmal Kasab…Kasab was a foot jihadi who carried out orders. Ansari was part of the team of six main conspirators who helped Hafiz Mohammad Sayeed, the head of the LET, in the planning and execution of the attacks.

The interrogation will focus on two dimensions. The first and the most important dimension will be whether his going to Saudi Arabia from Pakistan presaged any fresh plans of the Lashkar-e-Toiba (LET) to mount a new mass casualty terrorist attack in Indian territory. In this connection, they will ask him questions such as: Was he really arrested by the Pakistani authorities and put in jail to face prosecution as claimed by Senator Rehman Malik, Pakistan’s Interior Minister, on February 12,2009, or was it a charade to hoodwink India? If he was arrested and jailed, how did he manage to get out and go to Saudi Arabia? Did he manage to escape to Saudi Arabia with the complicity of the Pakistani authorities and, if so, who were in the picture regarding this complicity? What was the purpose? Was it to organise a fresh terrorist strike in India? If so, what were the instructions to him by the ISI and the LET in this regard? When did he arrive in Saudi Arabia? How? Under what travel document? Issued before 26/11 or after? When was he arrested by the Saudi authorities? Under what circumstances? What did he tell the Saudi authorities during the interrogation by them? Was the Pakistani Embassy in Saudi Arabia aware of his arrest and of the plans of the Saudi authorities to hand him over to India? If so, did the Pakistani authorities try to stop it? What happened in the LET and ISI headquarters after 26/11 to organise the cover-up? What are the details of the cover-up plans? What are the present intentions and plans of the ISI and the LET? Were they talking in terms of resuming terrorist strikes in India? If so, what kind of infrastructure like sleeper cells they have in India? Who are the members of these cells? What are likely to be their targets?

The second dimension will be to complete the gaps in the reconstruction of the 26/11 terrorist strikes. The gaps are: Were there any more Indian Muslims involved in assisting the LET and the ISI in planning and carrying out the strikes? Who are the others? Where are they? Why the targets attacked in Mumbai were chosen? Who did the target selection? Why foreigners, particularly the Americans and other Westerners, were attacked? Who took the decision to attack them? When was the decision to mount the attack taken? By whom? Was it an idea initially suggested by the LET and subsequently backed by the ISI or was it an original idea of the ISI given to the LET for execution? What was the role of Headley of the Chicago cell of the LET in the entire operation? Who were his contacts and accomplices in India?

Ansari is a much more important catch than Ajmal Kasab. Kasab was uneducated. Ansari is educated having reportedly studied in a technology institute of Maharashtra. Kasab was a foot jihadi who carried out orders. Ansari was part of the team of six main conspirators who helped Hafiz Mohammad Sayeed, the head of the LET, in the planning and execution of the attacks. Ansari was in Pakistan before, during and after the strikes liaising with the LET leadership and was thus having knowledge of what happened during that period. His evidence will, therefore, have greater credibility and importance than that of Kasab in the eyes of the courts and the international community.

If his disclosures indicate that his escape to Saudi Arabia was part of a diabolical plan of the ISI and the LET to organise a fresh strike in India, it could have a negative impact on Indo-Pakistan relations and affect the peace process .Otherwise, not. There is unlikely to be any pressure on the Government of India for a retaliatory strike on Pakistan.

The US will be closely monitoring the interrogation to find out what he says about the attack on US nationals. If he says that the US nationals were attacked and killed with the prior knowledge and on the instructions of the ISI it could cause a further set-back to Pakistan’s relations with the US and make India hesitate to go forward on the peace process.