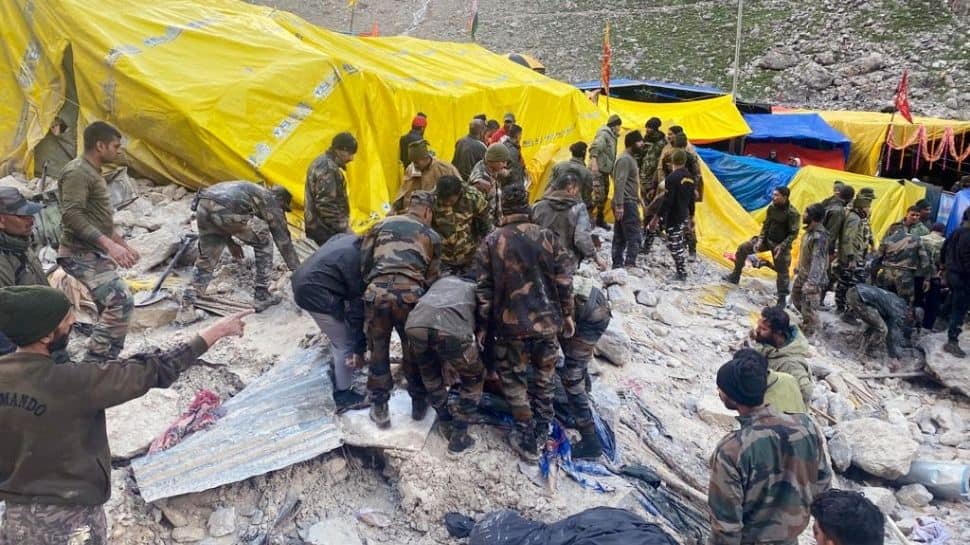 Last Friday’s flash flood of unprecedented magnitude on the route from Baltal to the Amarnath shrine in J&K that completely obliterated a base camp site of devotees was so sudden and substantial that it gave the hapless pilgrims virtually no chance to escape. Consequently, several injured devotees were trapped under a mound of rocks, boulders and earth that covered the campsite, while many more were buried underneath.

Rescue operations to extricate the unfortunate devotees presented a colossal challenge due to several reasons. One, the area affected by the flash flood was very large with soil and rock debris spread all over, identifying the precise location of the tents housing pilgrims buried underneath, was extremely difficult. Two, since the flash flood hit the pilgrim camp late in the evening, darkness fell soon thereafter, which made search for survivors extremely difficult.

While those who were injured or trapped but conscious could be located by their cries for help, to find those unable to call for help in the vast sea of rubble was a herculean task as it entailed a physical search for survivors in complete darkness. Lastly, though the civil administration had  prepositioned route clearing detachments along the pilgrimage tracks, these do not have any heavy earth moving equipment as the track has not been made into a motorable road under directions of SC (2012) also since the area near the shrine had a past history of only  minor land slips and rock slides, which could be cleared manually. But this area where the disaster struck was the base camp near Baltal it was accessible by road.

Notwithstanding these fearful odds, rescue efforts commenced immediately and the army, which was deployed for security duties, quickly became one of the first responders. While the civil administration took prompt action to augment rescue efforts, the army also pitched-in with full vigour. While soldiers at the incident site meticulously scoured the area searching for survivors, the army rushed in heavy earth moving and specialised equipment like ground penetrating radars to expedite rescue efforts, which given the poor state of surface communication due to incessant rains, in itself was a herculean task.

In addition to round the clock rescue and relief work, and despite adverse climatic conditions, the army also undertook the construction of an alternate route towards the Amarnath cave that bypasses the water channel created by the July 8 flash floods so that the pilgrimage could continue. With the death of 16 pilgrims and another 40 devotees were reportedly still missing, this incident is undoubtedly a big national tragedy, but as stated earlier, nothing could have been done to save these lives since the flash flood was so swift, sudden and enormous.

However, while mourning the loss of so many human lives, all those involved in rescue operations deserve due appreciation for their consummate dedication that helped save many lives. While the army has been keeping us abreast with its rescue related activities through its spokesperson, this is being done with the army’s characteristic modesty and hence hasn’t received the attention that it rightly deserves. So, a few words about the army’s stellar role in rescue operations.

What’s most important that army resources in J&K are totally committed on manpower intensive tasks- from being deployed along Line of Control [LC] to defend India’s territorial integrity as well as prevent infiltration of terrorists from Pakistan occupied Kashmir [PoK] to conducting anti-terrorist operations in the hinterland. Nevertheless, whenever required to provide assistance during manmade or natural calamities, the army leaves no stone unturned to save lives and assist the needy. Memories of the 2014 Kashmir floods are still ingrained in public memories when the army set a record of sorts by rescuing   2,98,514 civilians and setting up relief centers.

One is also reminded of the pivotal role played by the army during the massive Uttarakhand deluge of 2013 that wiped out entire habitations and washed away roads that left thousands of pilgrims stranded as well.  However, providing assistance during calamities isn’t the only field in which the Indian army has proved its mettle. Readers would recall that just before commencement of the 2010 Commonwealth Games in New Delhi, when an under construction overhanging footbridge outside the main venue came crashing down, it were the Indian army engineers who by constructing a bridge in a record time of four days helped prevent a national disaster.

Eight years later, the army was called-in to use its unmatched expertise in speedy and sturdy construction to provide three footbridges in Mumbai’s busy Elphinstone Road-Parel, Currey Road and Ambivli stations. After demonetisation in 2016, not only did the Indian army assist the central government in printing and transporting new currency notes but even provided assistance in the subsequent disposal of old currency. The Indian army has thus proved that it has unparalleled determination to efficiently undertake even those tasks for which it has no previous training whatsoever and produce the desired results.

For the Indian army, offering a helping hand to their countrymen in distress is considered a sacred duty and as such executed with utmost dedication and determination. This remarkable ethos and outlook  of the Indian army has earned implicit public faith and that’s why it’s truly a ‘People’s Army’!