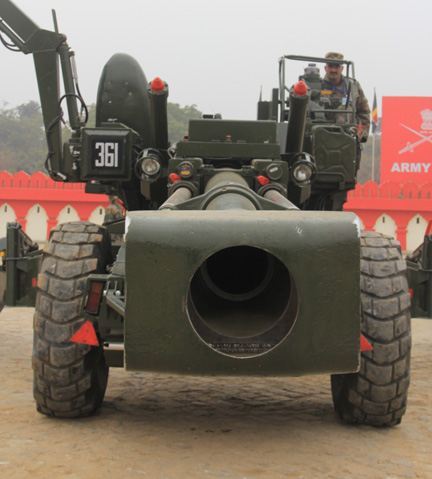 “At a time when major powers are reducing their forces and rely more on technology, we are still constantly seeking to expand the size of our forces. Modernisation and expansion of forces at the same time is a difficult and unnecessary goal. We need forces that are agile, mobile and driven by technology, not just human valour.” – Prime Minister Narendra Modi, Combined Commanders Conference, December 15, 2015

Finance Minister Arun Jaitley while presenting the Union Budget 2016-17 to the Parliament on February 29, 2016 set aside Rs. 3,40,921.98 crore (US$ 52.2 billion) for the Ministry of Defence (MoD). Mr. Jaitley made a key change in the long-established format of resource allocation among the three defence forces (army, navy and air force) and other establishments under the MoD. The change in format has, however, not changed the skewed nature of growth of MoD’s allocation. Since the implementation of the Sixth Central Pay Commission (CPC) recommendations in 2008-09, these allocations have been dominated by the increases in manpower cost. The new budget has gone a step further in accommodating the increases in pay and pension at the cost of capital expenditure, most of which is spent on procurement for capability enhancement of the defence forces. The implementation of the defence One Rank One Pension (OROP) and Seventh CPC recommendations set to take effect from next fiscal year brings into stark focus the desirability of manpower-led increases in the defence budget and the long-term sustainability of modernisation expenditure.

The long-used format for defence resource allocation has undergone a change in the budget of 2016-17. As per the new format, MoD’s total allocation is distributed into four Demands, in comparison to eight in the earlier format (Table 1). It seems that the intent is to rationalise the budget-making process and show the allocations provided to the three armed forces separately from the allocations made to other organisations under the MoD. As a result, some of the organisations – such as the Ordnance Factories (OFs), Defence Research and Development Organisation (DRDO), Director General Quality Assurance (DGQA), Rashtriya Rifles (RR), National Cadet Corps (NCC), Military Firms (MF) and Ex-Servicemen Contributory Health Scheme (ECHS) – which earlier shared their budget with the armed forces’ budget, are now made part of the Demand no. 20 of the new format.

The change in budget format has brought in an element of incompatibility for the purpose of comparing the new budget with the previous budget. An attempt is made here to reconcile the new budgetary figures with the format used earlier. The reconciled figures are presented in Tables 2 and 3. As can be seen from Table 2, compared to the preceding year, in 2016-17, the defence budget has witnessed a negligible growth of less than one per cent. However, as compared to the revised estimate (RE) of 2015-16, the growth in the new budget amounts to 11 per cent. The higher growth on the base of the RE indicates a downward revision of the original allocations made in 2015-16. Unlike in many past years in which the downward revision was largely restricted to capital expenditure, in 2015-16, the downward revision is undertaken on both revenue and capital expenditure.

This is surprising, given that unlike in some other years, 2015-16 was year of tax buoyancy. In fact, as stated by the Union Revenue Secretary Hasmukh Adhia, it is the “first time after a gap of five years that the tax collections in 2015-16 would be as per the expected line”. In such a scenario, by not fully spending the allotted budget, the MoD has lost a big opportunity with a clear implication on its latest allocation. This is because underspending in any given year limits the extent to which the budget can be increased in the subsequent year. The marginal increase in the 2016-17 defence budget is a clear testimony to this effect.

As indicated in Table 3, all the key growth indicators of 2016-17 are in the negative zone or have improved marginally. The only exception is the MoD’s overall budget which has grown by Rs. 30,842 crore (9.95 per cent). However, such growth has not resulted in any increase in the capital expenditure, which has, in fact, been reduced by a whopping Rs. 8,248 crore (8.7 per cent). On the other hand, the defence pension and the salary component of the armed forces have been increased by 52 per cent and 14 per cent, respectively. These two heads of expenditure have not only cornered the entire growth of the MoD’s overall budget but also eaten into the other heads of expenditure including the all-important capital expenditure. Given this hard reality, it would not be wrong to say that the MoD’s latest allocation is all about pay and perks!

The Figure 1 shows the distribution among various stakeholders of MoD’s total allocation minus defence pension. As can be seen, the Indian army has the biggest share in defence resources, followed by the air force, the navy and the DRDO. The biggest share of the Army is primarily because of its numerical superiority over others. Accounting for over 85 per cent of the uniformed personnel, bulk of its budget goes into revenue expenditure. In 2016-17, only 21 per cent of its total allocation is earmarked for capital expenditure. In comparison, both the navy and air force have around 44 per cent of their respective allocations earmarked for capital expenditure.

Tables 4 to 6 show the budgetary provisions for capital acquisition for the three forces. As can be seen, all the three services have witnessed a decline not only at the 2015-16 RE stage but also in their 2016-17 allocations. The back to back decline comes at a time when all the three services have several mega procurement contracts (including the one for the long-delayed Rafale fighters) to be finalised. The cut in the latest allocation therefore means that all the pending procurement projects would not go through unless the government decides to step up the allocation during the course of the forthcoming budgetary period.

While not discounting the government’s power to provide extra-budgetary resources anytime in a year, it would be worthwhile to examine the ability of the government to step up modernisation expenditure in a midst of a financial year. A close examination of the past defence budget would reveal that the government’s ability to do so has come under repeated pressure. In fact, in the past four years, the MoD has surrendered over Rs. 35,000 crore from its capital allocations (Table 7) to accommodate primarily the increases in salary and pension arising out of implementation of the Sixth CPC. Figure 2 shows the impact of the Sixth CPC on the defence budget with particular emphasis on pay and allowances. As can be seen, there has almost been a 12 percentage point increase in the share of armed forces’ pay in the defence expenditure, and such increase has come at the cost of other expenses including that of modernisation. 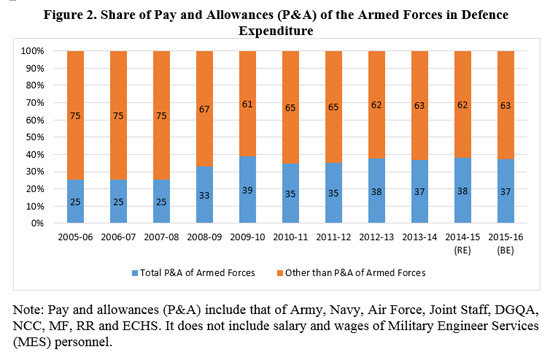 It is to be noted that defence forces are not the only ones which have witnessed the ballooning of their pay and allowances pursuant to the implementation of Pay Commission. What is however unique to the defence forces is that the increase in pay and allowances is also due to the continuous expansion of forces. An indication to this effect is clearly discernible from the Figure 3, showing the steady increase in the held strength of armed forces officer over the past 57 years. Significantly, such continuous expansion of strength has gone largely unnoticed in the public debate until Prime Minister Modi made a bold statement to this effect in his speech at the Combined Commanders Conference in December 2015. One can only hope that the PM’s statement is taken to the logical conclusion by way of making a comprehensive review of the security forces in the light of technological advancement and budgetary constraints. 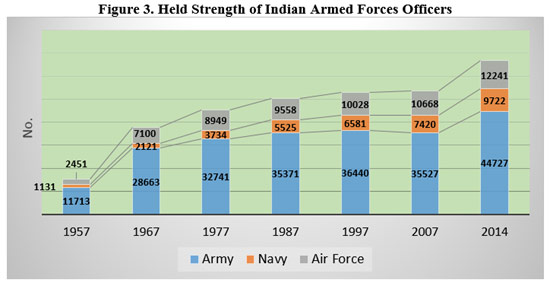 Mr. Jaitley’s budget has a mixed impact on the ‘Make in India’ initiative in defence sector. On the positive side, there are a slew of tax-related measures to incentivize the domestic industry (Table 8). The withdrawal of tax benefits extended to direct imports by the MoD would provide a much needed level-playing field to the domestic industry as a whole vis-à-vis the foreign companies. Similarly, the withdrawal of tax benefits enjoyed by the contractors of the government-owned entities would provide the level-playing field to the Indian private sector vis-à-vis the Defence Public Sector Undertakings (DPSUs) and OFs. On the flip side, there have been two clear disappointments. Firstly, the allocation for the DRDO, which is supposed to be at the heart of the design and developmental efforts under the ‘Make in India’ initiative, has been curtailed by 5.3 per cent. Secondly, the new budget does not provide any allocation for ‘Make’ projects, whereas the paltry sum of Rs. 144.41 crore provided under this head in previous budget has been taken out at the revised stage.

The fiscal year 2016-17 marks yet another year in which defence allocation has been overshadowed by the increases in the manpower cost. More disturbingly, the manpower-centric growth in the defence budget has begun eating into the capital expenditure which is key for modernisation of the armed forces. This skewed nature of the growth, which originates from the implementation of the Sixth CPC, is likely to intensify further in the coming years because of the implementation of OROP and the recommendations of the Seventh CPC.

The only options left to reverse the current imbalance are either to make substantial hike to the defence budget or find a scope for controlling the manpower cost so as to free more resources for modernisation. The first option is easier said than done due to the already stretched budgetary position of the central government after the acceptance of the 14th Finance Commission (that has resulted in greater devolution of central taxes to the states) and the greater focus of socio-economic development of the country. This therefore leaves the second option as the only viable alternative to explore.

As indicated by the PM himself, continuous expansion of forces is not only unnecessary (given the changing nature of war) but also difficult to sustain because of the fiscal pressure. Continuing with the business-as-usual approach is not an option any more as that would mean erosion of the existing military capability. The government must therefore act and act fast. The government may like to review the current force structure of the three defence services, along with the colour service, terms of engagement and the teeth-to-tail ratio. This can only be possible by setting up a Force Structure Commission to look into all the issues holistically.

In fact, review of force structure and other issue pertaining to the defence forces should be standard practice of every new government that comes to power, as it is being done in major advanced democracies such as the United Kingdom and the United States. India can least afford to have a defence budget that is all about pay and pension. Finally, the government may like to include all the MoD’s budget including that of pension for the purpose of estimating the defence expenditure. This will not only portray the true picture of defence burden, but may go a long way of saving the government from some of ill-informed criticisms that the government spends little on the defence efforts.