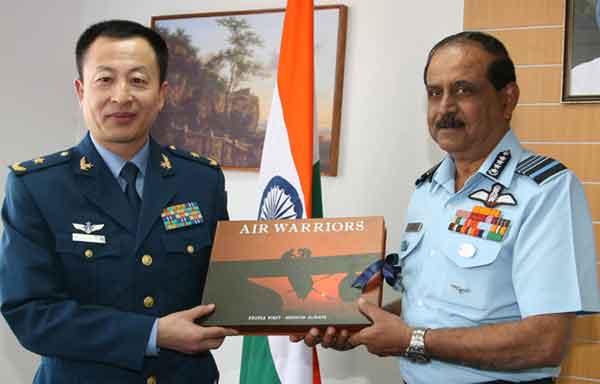 The press conference by the CAS, Air Chief Marshal NAK Browne, on 07 Feb 2013 was a question & answer session. Highlights is short are given below.

The planned procurements are as follows:-

In Next two plan periods.

The Iron dome/ David’s Sling SAM systems are optimized for Israel with small area & short borders. Our challenges are bigger areas & population centres to defend, long borders,& a denser AD threat. We can take technological inputs from them but their systems are not the ideal solution to our needs.

Planned for 22 Feb 2013 to showcase some of our capabilities, the exercise will start in the evening & continue into the night.

This is scheduled in phases in Mar & Apr 2013, will integrate & test component capabilities.

There is no change in the development process with the Russians. The R& D phase is on. The 1st development a/c should arrive in 2017 & the 2nd a year later. Performance parameters will be checked to find out what we need. First production will start in 2022 or so.

The IOC is expected at the end of this year with the 1st Sqn becoming operational by 2015. The aircraft will take part in the armament exercise in Feb 2013. The QRs do not get changed but certain compromises take place since designers cannot meet QRs at times. A limited quantity of the Mk 1 variant will be produced & then production will shift to Mk2. Changes in engine & integrated EW suites are contemplated in the latter variant.

IAF is capital intensive & so the revenue expenditure has to be controlled at 40% as otherwise money for capital expenses like induction will fall short. A lean, mean & thin force is needed.

Our Combat Capabilities. These remain superior to our potential adversaries mainly due to the quality of our manpower which will give us an edge over China after 10 years. However this has to be backed by modern equipment, training, back up support education  levels and experience.

Support To Agencies. Partners like ADA & HAL have to be supported by the IAF. A good functional relationship exists. However times are hard & cost cutting,control of cost escalation, sticking to time frames, proper budgeting, etc are essential.

Basic Trainer. The PC 7 is a proven trainer. The HAL project will incur higher costs & R&D costs will fall on the IAF. One type of this basic trainer is enough.

The IJT. This has been a disappointment with engine issues and lack of progress in a project started in 2004-05.

Space Command. Integrated Space, Cyber & Special Operations Commands with the lead service as the IAF for the 1st, Navy for the 2nd & Army for the 3rd is the proposal to the COSC by the 3 services.The final proposal will be put up to the Govt after it is received by the COSC in end Feb 2013.

Combat Role For Women. The status quo remains. The IAF has the highest number of women officers & women aircrew serve in all aircraft except fighters.

The Chattisgarh Incident During Anti-Insurgency Ops. Some distorted facts were reported. There are people who want to create rifts between govt agencies and who spread reports to do so to weaken the power of the State. This has to be guarded against.