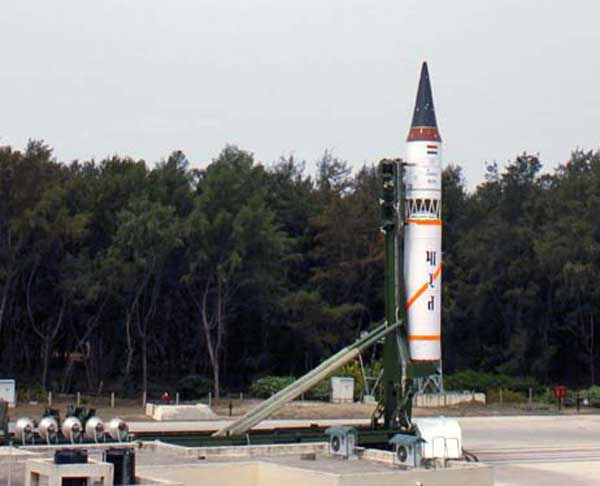 Is China feeling threatened by India’s Inter-Continental Ballistic Missile (ICBM) capabilities? The way it has reacted to India’s recent back-to-back successful testing of Agni-IV and V, it is clear that China is rattled and upset with India’s growing missile capabilities. Though India had been testing these missiles for the last five to six years, China had by and large refrained from commenting over India’s missile programme. The last time China had reacted was in April 2012, when Agni-V was first test-fired successfully. China did not react when Agni-V was test-fired for the second time in September 2013 and for the third time in January 2015. India’s Strategic Forces Command (SFC) is expected to conduct two more tests before inducting Agni-V missile into its weapons arsenal. Similarly, there was no reaction from China when Agni-IV was first test-fired earlier in November 2011, and thereafter in September 2012 and January 2014, before being inducted into the armed forces in December 2014, though user trials are still on.

However, after India conducted the fourth test of Agni-V on December 26, 2016, Chinese foreign ministry spokesperson stated the very next day that “The UN Security Council has explicit regulations on whether India can develop ballistic missiles capable of carrying nuclear weapons.” The spokesperson added, “China always maintains that preserving the strategic balance and stability in South Asia is conducive to peace and prosperity of regional countries and beyond.” Interestingly, similar to the statement issued by China in April 2012, after Agni-V was first tested, the latest statement too reiterated that India and China “are not rivals for competition but partners for cooperation.”1

The Chinese spokesperson was probably referring to the United Nations Security Council (UNSC) Resolution 1172 of June 1998, which was passed in the aftermath of the nuclear tests conducted by both India and Pakistan in May 1998. The resolution had urged India and Pakistan not to develop nuclear weapons delivery platforms like ballistic missiles and also to cap their nuclear weapons programmes and cease all fissile materials production. This resolution was approved under Chapter VI of the UN Charter and is non-binding. There are no constraints therefore on India pertaining to its weapons and missile programmes.

In response to the Chinese reaction, the spokesperson of the Indian Ministry of External Affairs immediately affirmed that “India’s strategic capabilities are not targeted against any particular country and India abides by all the applicable international obligations. India’s strategic autonomy and growing engagement contributes to strategic stability.”2 The Indian print and electronic media, however, stated the obvious; claiming that, now with 5000 km-plus range, Indian missiles could reach any part of China. The way media went about commenting on India’s growing missile capabilities, which received wide international coverage as well, could have to an extent spurred China to react.

The Chinese spokesperson in her statement had alluded to speculations in the media reports about India developing Agni-V to counter China. This came out in a more upfront manner in an editorial published in the Global Times, country’s leading English-daily affiliated to the Communist Party of China, two days after India successfully conducted the user trial of Agni-IV on January 02, 2017. The editorial accused India of breaking “the UN’s limits on its development of nuclear weapons and long-range ballistic missile” as “New Delhi is no longer satisfied with its nuclear capability and is seeking intercontinental ballistic missiles that can target anywhere in the world.” The editorial warned that China “will not sit still if India goes too far…If the UN Security Council has no objection over this, let it be. The range of Pakistan’s nuclear missiles will also see an increase.”3

Interestingly, three weeks later, Global Times carried an editorial emphasising the strategic significance of Dongfeng-41, China’s own ICBM, and how it could bring more respect to China. The editorial argued that, “It is logical that Beijing attaches particular importance to the Dongfeng-41 as a strategic deterrence tool. With China’s rise, China’s strategic risks are growing. China bears the heavy task of safeguarding national security. Nuclear deterrence is the foundation of China’s national security, which must be consolidated with the rising strategic risks.” Taking the argument further, the editorial stated that, “China must procure a level of strategic military strength that will force the US to respect it.”4

However, media coverage of the successful test-firing of the two long-range missiles by India cannot be considered as the only reason why China reacted so brashly. Some of the recent developments too could have added to China’s growing discomfort over India gaining prominence in the strategic arena. Beijing is probably finding it difficult to accept the fact that India, despite not being a signatory to the Nuclear Non-proliferation Treaty (NPT), is getting preferential treatment from the rest of the world (read the US, Russia and the European Union). India had recently joined the Missile Technology Control Regime (MTCR), whereas China’s credentials to be in the grouping were found lacking. Meanwhile, China has been trying to ensure that India does not gain entry into the Nuclear Suppliers Group (NSG). Instead, it wants Pakistan to gain entry into the NSG, fully aware of its highly questionable non-proliferation record.

While China appears concerned about India’s growing ballistic missile capabilities, it fully understands that the concept of so-called strategic stability in South Asia is actually a misnomer. The People’s Liberation Army (PLA) had established a special missile arm in their defence establishment, called Rocket Force, on December 31, 2015. Further, China itself had tested various missiles during 2016. These tests included Intermediate-Range Ballistic Missiles (IRBMs) like DF-21, ICBMs like DF-41 (a multiple warhead missile), a hypersonic missile test-fired from Chinese J-16 strike fighter, anti-ship missiles like YJ-12 and YJ-18, and missile defence interceptor test for missile DN-3, which is also known to have the capability to destroy satellites in the low earth orbit. In fact, very recently, there were reports about PLA’s Rocket Force conducting an exercise with DF-16 medium range ballistic missile, which, with a range of 1,000 km, can easily target several countries in China’s neighbourhood including the US military assets in Japan.

China fully understands that having arsenal in thousands is of little consequence. What counts is the potency and accuracy of the weapons/missiles and the nature of military tactics employed. It is but obvious that China must be keenly monitoring India’s progress in the submarine-launched ballistic missile (SLBM) arena. India has already successfully tested the K-4 SLBM and its efforts to marry this missile with the submarine are progressing well. China probably worries that India’s growing military profile is no longer South Asia-specific.

Apart from raising objections to India’s missile testing and stalling India’s entry into the NSG, China has also been acting against Indian interests on the issue of terrorism emanating from the Pakistani soil. India, however, does not appear to be giving a strong response to such Chinese actions. India could have launched a ‘different form of surgical strike’ by exhibiting its missile potential during the Republic Day parade in January this year. For all these years, the parade has been used by India to display its achievements and progress in social, scientific and military sectors.

Globally, it has been observed that countries use such ceremonial parades to display their military capabilities to the world. On September 03, 2015, China had held a grand military parade to mark the 70th anniversary of the victory of ‘Chinese People’s War of Resistance against Japanese Aggression and the World Anti-Fascist War’. The occasion was used by China to display a host of new armaments, ranging from ICBMs to medium-long range bomber aircraft, highlighting the nation’s inherent military strategy of “active defense.”5 Russia is also known to use the occasion of Victory Day parade held every year on May 09 (to commemorate the victory of the Soviet Union over Nazi Germany) to demonstrate their military capabilities. States like North Korea, South Korea, Iran, etc. are also known to use such ceremonial parades to demonstrate their military strength including missiles.

During the 2013 Republic Day parade, India had displayed Agni-V and at that point of time too Chinese media had taken note of it. During the subsequent years, 2014 and 2015, Japanese Prime Minister Shinzo Abe and the US President Barack Obama were the chief guests for this parade. It appears that India avoided displaying its nuclear might after 2013 for obvious geopolitical reasons. But, January 2017 parade was different. During the last one year, China has repeatedly rubbed India the wrong way and for no reason. Hence, it was important to fully display India’s strategic capabilities.

A display of ICBM in a ceremonial parade may have a very limited strategic relevance but, what was important is the timing. In view of China’s adverse reaction to India’s missile testing, this year’s Republic Day parade could have been used for strategic signalling. Nuclear deterrence is also about demonstration and display of capabilities. If you have it, then flaunt it! Suchstrategic signalling is often necessary to send a strong message to arrogant entities questioning India’s ‘strategic autonomy’.