The obsession with Hafiz Saeed displayed by politicians and media during President Zardari’s recent visit was amusing. Hafiz Saeed is not the issue. He is the symptom of the issue. That issue is not terrorism. The issue is ideological. Hafiz Saeed does not appear to be a terrorist. The hypocrisy of the Indian establishment which hit the roof after America placed a bounty on his head is nauseating. The same America, along with the United Nations, accused Lashkar-e-Toiba of perpetrating the Samjhauta Express bomb blasts by providing detailed information of five culprits who carried out the act. 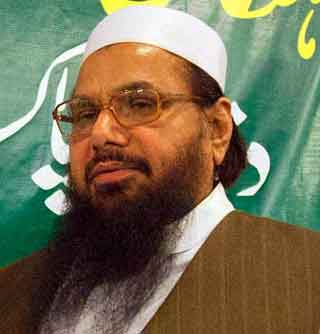 Yet Indian politicians and the media feigned blissful ignorance of this while the UPA government accused Hindu terrorists of committing the same act of terror. How hypocritical can we get? If America and UN were wrong about the Lashkar committing the Samjhauta terror, why believe that America is right about Hafiz Saeed being a terrorist? Does it need America to tell us what Hafiz Saeed is? How subservient can we get?

Hafiz Saeed should know that this is our cause for which we will fight our war.

After all, what does Hafiz Saeed represent? Pakistan asks India to provide sufficient evidence that might stand up in a court of law to nail Saeed as a terrorist. Our government says a full dossier has been provided to Islamabad. That dossier should be shared with the public. Is Hafiz Saeed a terrorist or, much worse, is he the ideological mastermind guiding terrorists in pursuit of an agenda he has never hidden? One is doubtful if legally he has incriminated himself by actually participating in terrorism. More likely he provides ideas and ideological leadership to the terrorist networks. He seems similar to the late Jagjit Singh Chauhan who propounded the idea of Khalistan, justified and extolled violence by others, but never bloodied his own hands with terror. Saeed’s agenda is publicized. His justification of terror is open. His admiration and support for the late Osama bin Laden was never hidden. What is terrorism to us is war to him. Whether or not he is a terrorist, his agenda must be fought at the ideological level.

Recently Hafiz Saeed spoke about his life to a Karachi newspaper. Excerpts were reproduced in the Indian media. He was born of Gujjar parents residing in what is now Haryana. His family was a victim of terror. He was born in a caravan during the journey escaping to Pakistan. His parents must have recounted to him the horrifying tales of communal terror they had encountered. Within four months after Independence over half a million innocents had been slaughtered. The number of Muslim casualties was the highest in Punjab. These are official figures. Not surprisingly Saeed’s attitude was conditioned by his upbringing in a Pakistan that became increasingly more fundamentalist.

Hafiz Saeed: “…If the superpower of its time, the Soviet Union could not occupy Afghanistan and the present superpower, US, is preparing to leave Afghanistan defeated, India also cannot stay in Kashmir.”

This is in sharp contrast to people belonging to this writer’s generation. I was thirteen years old when Partition occurred and had witnessed the communally integrated region before it became Pakistan. I had seen the political discrepancies of that period during boyhood, and decoded them in adulthood to conclude that the tragedy was engineered by our colonial masters. They manipulated the tallest Congress and Muslim League leaders to make them act like pawns to further Britain’s global strategic interests. The mindset of my generation therefore is conditioned by a different experience. And that brings us to the ideological divide between the likes of Hafiz Saeed and this writer.

Hafiz Saeed told the media: “I am emotionally attached to the issue of freedom for Kashmir. I strongly believe that India will have to eventually leave Kashmir. If the superpower of its time, the Soviet Union could not occupy Afghanistan and the present superpower, US, is preparing to leave Afghanistan defeated, India also cannot stay in Kashmir.”

I will not dwell upon the cockeyed view of history revealed by Hafiz Saeed who compares the situation in Afghanistan with the one in Kashmir. Nor will I reiterate the chequered history of the Partition, of Kashmir, and of the blunders made by the Indian leadership resulting in the present crisis. That has been written about in books and newspaper articles. To counter Hafiz Saeed one must go to the heart of the problem and discuss the basic ideological dispute.

The Muslim League was committed to the two-nation theory and sought Partition. The Congress opposed the two-nation theory and was committed to India’s unity. But India was partitioned according to the two-nation theory to create theocratic Muslim Pakistan. The Congress had betrayed the public and its own pledge to prevent Partition. However it kept up the pretence that although Partition was accepted the Congress party’s commitment to secularism and Indian unity remained intact. This brazen chicanery did not work. Pakistanis said that the Partition remained incomplete until Muslim majority Kashmir also became part of Pakistan. Hardcore Hindu elements claimed that since the two-nation theory had been accepted and Muslim Pakistan had been carved out, residual territory had to be Hindu India. Therefore all Muslims must be expelled from India. Or, as Mr Subramaniam Swamy demands, they should be disenfranchised and debarred from voting.

To counter Hafiz Saeed one must go to the heart of the problem and discuss the basic ideological dispute.

However, there is a third option supported by this writer and many others. The Partition was wrong and therefore in substance it must be undone. It can be undone in two ways. Either a South Asian Union may be created diplomatically allowing India, Pakistan and Bangladesh to retain their sovereign identities but joined together through common defence, common market and free movement without visas as it obtains in the European Union. That would establish the cultural nationalism of the subcontinent. Otherwise Pakistan would implode of its own accord and disintegrate. Its dismembered parts would join with India to recreate undivided Hindustan. There are more Muslims in India than in Pakistan. The Tamil Muslims are Tamilian, the Bihar Muslims are Bihari and the Punjab Muslims are Punjabi. The Muslims of the subcontinent are Hindustani. They have been so for centuries.

Hafiz Saeed should know that this is our cause for which we will fight our war. If he persists with his war he will have to reckon with our war. If he does not accept the decent and humane option of creating a South Asian Union, he and all those who think like him in Pakistan should be prepared for the eventual disintegration of their nation. Let him rest assured that the latter option would be achieved without firing a single shot. Pakistan would implode through isolation. To isolate a rigid Pakistan would require a government in New Delhi with will and vision. Let him also rest assured that India’s present government will not last forever. A future government with the requisite will and vision will surely govern India sooner rather than later. Hafiz Saeed is welcome to his view of history. I believe that my view represents the tide of history. History will decide who is right.

Read Next: Wanted Dead or Alive – Well, Not Quite

is a veteran columnist, cartoonist and political activist.

One thought on “Addressing Hafiz Saeed”