As far as submarine design expertise is concerned – India is at present at the initiation point of the learning curve. The submarine design capability curves of others like USA, Russia, UK and France have more or less peaked to a plateau. After the Cold War ended – the design effort in that direction tapered off and accordingly the availability of skill levels have also deteriorated. A serious debate is raging among the major maritime powers as to how to sustain the submarine design capabilities built up painfully over the years. The USA is re-orienting its build strategy to a process involving a seamless design exercise termed Integrated Product and Process Development (IIPD)

The Indian Navy (IN) has had a long standing aspiration for building a credible submarine arm. The government on the other hand, initially opposed the idea on ideological/ethical grounds. It considered the submarine as an offensive weapons platform. The policy went to the extent of blocking the acquisition of submarines even for purposes of preparing the IN for anti-submarine warfare. In the late 1950s and 1960s, the IN had to make do with British Royal Naval (RN) submarines once a year, during the Commonwealth Joint Exercises off Trincomalee (JETEX). The Navy’s weakness in this domain was manifest in the loss of INS Khukri during a submarine active search operation against Pakistan Navy’s Daphne class submarine in 1971.

It was only in the early 1960s that the government relented on its stand and for the first time agreed to depute a group of officers for submarine training to the UK. However, by then, the UK government had changed its mind about selling a modern submarine to the IN. Fortunately, around the same time – the erstwhile USSR expressed its willingness to make available a contemporary submarine to the IN. The induction of I641 class (F class) submarine commenced in December 1967. Since then, the IN has steadily built up its submarine arm. Further induction of submarines of Project 877EKM from the USSR and HDW/IKL type 1500 SSK submarines from Germany, was initiated in the 1980s. In the intervening period, the tactical, operational and strategic skills of the IN on submarines were honed to perfection. Maintenance and repair skills up to Medium Repairs of I641 class submarines were also developed.

In anticipation of building indigenous capability for design and development of submarines – academic training on design was initiated at the RN College at Greenwich and the Grechko Naval Academy at Leningrad in the USSR. This was included as part of the Post Graduate courses for Naval Architects abroad. In the 1980s, the IN took another baby step forward by including design know-how and know-why transfer as a part of Transfer of Technology (ToT) in the HDW contract. Under that clause, a multi-disciplinary design team was deputed to Professor Aben Gobbler’s unit at Kiel/Lubek. This team has been the backbone of the Submarine Design Group (SDG) with the IN.

The design group had the confidence of undertaking any modification that could come up during the service life of the Howaldtswerke Deutsche Werft (HDW) boat. They also considered themselves capable of taking on a single hull submarine’s design ab initio. Since this would have been the first such attempt in India, validation of design and linked hydro-dynamic model tests would perforce have had to be undertaken by a reputed design agency with an established track record.

Australia has never designed a submarine before…

Another handicap was the non-availability of basic information including technical specifications and vendor details of machinery, equipment and components that form part of a submarine, in generic and specific terms. This would have been essential for taking on any fresh systems design. Progress on such a strategic objective got derailed due to the political/contractual fallout linked to the alleged Bofors/HDW scam.1 Regrettably, the first casualty was the production process itself and Mazagon Docks Ltd (MDL) was left high and dry. In course of time, all the production skills acquired were dissipated through retirement/migration of personnel with the appropriate technical knowledge and skills to other industries.

At the time of kick off of the follow on Direction des Construction Navale (DCN) Scorpene submarine programme – MDL had to start from scratch and train/acquire the basic skills and infrastructure all over again. Providentially, the design competence imbibed by the individuals trained in Kiel and Lubeck was meticulously preserved in the Submarine Design Group (SDG) archives at NHQ. Additionally, the timing coincided with the launch of the indigenous nuclear submarine programme. The core element of HDW trained design team could be conveniently, redeployed for this strategic programme. Considerable reorientation had to be undertaken in view of the conflicting design route chosen (i.e. single hull vs. double hull configuration). This collaborative engagement with the design consultant has now fructified into INS Arihant going critical and is scheduled to commence sea trials by end of the year2.

In 2002, an in-principle approval of the Cabinet Committee was accorded to the IN’s thirty year submarine building programme. In the first ten years, it was envisaged that there would be licensed production of submarines followed by indigenous design, development and production.3,4 The Scorpene contract concluded in 2005 with DCN of France was to form Phase I of the long-term programme. To build up the fast depleting force level – a parallel submarine building programme was also conceived for the East coast.

Due to circumstances beyond anyone’s imagination – the Scorpene project has slipped drastically and totally put out of gear the approved long-term, force building programme for which Acceptance of Necessity (AON) was accorded in November 20075. This has put severe pressure on the need for accelerating the induction of the Project 75I programme. Assuming that we are already nearing the half-way mark of the long-term programme initiated in 2002 – legitimate questions being seriously asked now are:

i. Submarine design know-how and know-why having been transferred as part of the HDW contract by mid-1980s.

ii. The TOT in respect of the ongoing Scorpene project.

The strategic need for expeditiously building up of the submarine force level and establishing full indigenous design and development capability are two sides of the same coin. In this paper, the thrust is on identifying ways and means of accelerating the creation of indigenous design capability.

Study of submarine programmes of the US clearly show that in spite of their long experience in submarine design and development and a well established industrial base – the estimated duration for their next generation of nuclear powered submarine is estimated to be as follows6: 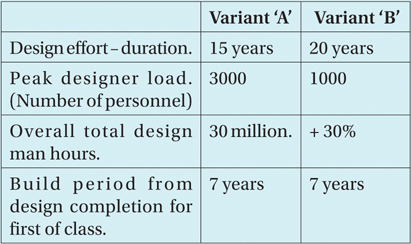 The traditional distinct design phases involved in the US practice are as follows. These are very similar to that followed by India too – except that the nomenclatures used may be slightly different:

As far as submarine design expertise is concerned – India is at present at the initiation point of the learning curve. The submarine design capability curves of others like USA, Russia, UK and France have more or less peaked to a plateau. After the Cold War ended – the design effort in that direction tapered off and accordingly the availability of skill levels have also deteriorated. A serious debate is raging among the major maritime powers as to how to sustain the submarine design capabilities built up painfully over the years. The USA is re-orienting its build strategy to a process involving a seamless design exercise termed Integrated Product and Process Development (IIPD)7.

Australia is going through a similar predicament. Its oldest Collin Class submarine will reach the end of its thirty-year service life in mid-2020 and the remainder five of the Class would follow suit sequentially. Australia has never designed a submarine before. The Australians engaged RAND to evaluate their capability and capacity to design conventional submarine. The study estimated that the design task would call for an estimated twelve million man-hours over a period of fifteen years and followed by a period of seven years for construction. At its peak, this would mean a pool of approximately 900 submarine-proficient draftsman and engineers in the industry and 170 oversight personnel in government departments.8,9 India needs to seriously consider all these developments while deciding on its strategy.

At this stage, it is interesting to take note of the comparative indigenisation particulars in respect of the leading Indian aircraft manufacturer Hindustan Aircraft Ltd (HAL) and ship builder MDL. For the year 2010–2011, the import content in respect of HAL and MDL is reported to have been of the order of 69.65 per cent and 37.38 per cent respectively. In the case of HAL, the level of consumption in respect of import raw material, components and spare parts works out to almost 87 per cent of the above figures.10,11

Comparing the above data with those achieved by the Advanced Technology Vessel (ATV) programme in respect of Arihant and the indicative figures for the follow-on submarine would be very revealing. It is expected that by the end of the present series production, the project would achieve an across-the-board indigenisation level of over 95 per cent on cost basis. That model needs to be emulated in other ship and submarine building and other indigenisation projects as well.