A Road For a Road- Blocking Chinese Unilateralism 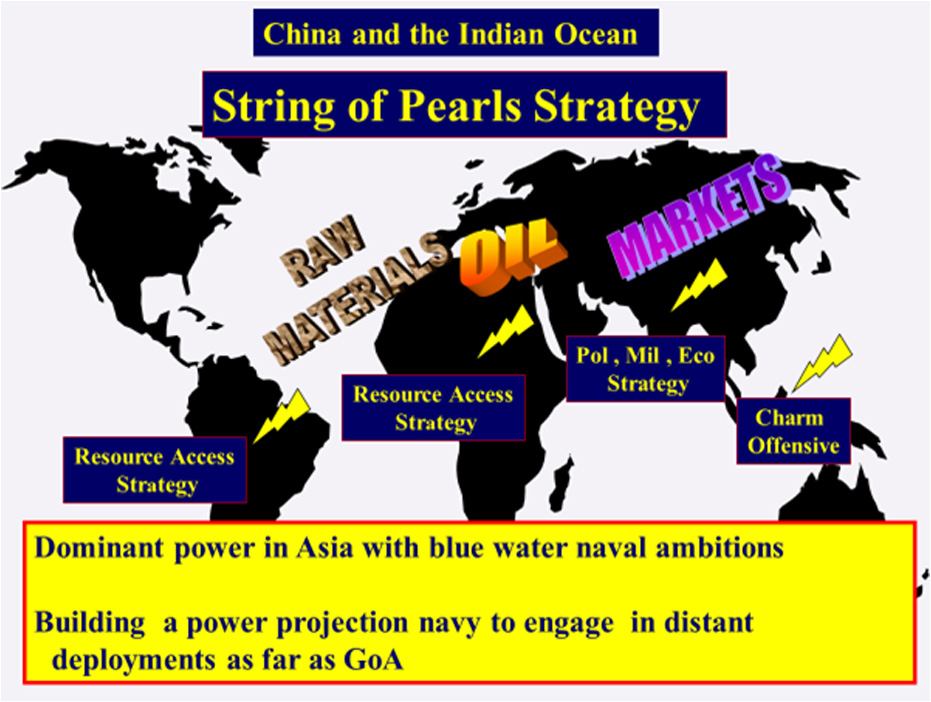 The Indo-Pacific region is becoming a playground of great Geopolitical powerplay and thus attracting many a scholar to analyze the power equations at play. The Indian Ocean is becoming increasingly important to China’s economic and security interests. To protect its economic and security interests and to balance a “rising India,” China appears to be pursuing a simultaneous approach of cultivating relations with many states in the Indian Ocean littoral, as well as developing a “String of pearls” of bases and access rights to key facilities in the region through it’s MSR strategy. China’s encirclement of India comes full circle by its increased presence not only at sea but on land borders with its increased military bases at TAR and Aksai Chin coupled with infrastructure development by its military engineers in PoK.

With the advent of Chinese ambitions in the Indo-Pacific it is but natural that the four major players in the Indo-Pacific, focus their energies together as an alliance, if not to directly threaten the Chinese overtures, but certainly to re-balance the power equation in the region in order to give more breathing space to smaller countries who are likely to get sucked into the Chinese whirlpool. Although this alliance has loosely been formed already, nothing concrete has been done till date to counter the Chinese Juggernaut. Whereas China is strategizing in both the Heartland and the Rim-land realms, the Alliance is still literally at sea, taking stock of the Rim-land and offshore of it. Its first official meet in the shadows of the ASEAN summit has raised many Chinese eyebrows.

During a recent interaction with Strobe Talbott and John Allen in the Brookings Foundation at New Delhi, when asked about the Chinese Predicament, the answer was a cautious geopolitically correct statement that US is following a policy of four C’s in the region against China, namely Cooperate wherever possible, Compete for limited resources, settle for Conflict Resolution whenever possible and be prepared for Confrontation. The big question is if this is enough.

In India, the Alliance sees a fiercely independent strong-willed partner who has shown its resolve by not participating in the Belt Road Initiative and gone to the extent of blocking Chinese unilateral expansionism in a third country namely Bhutan during the Doklam crisis.

Opportunities for the QUAD 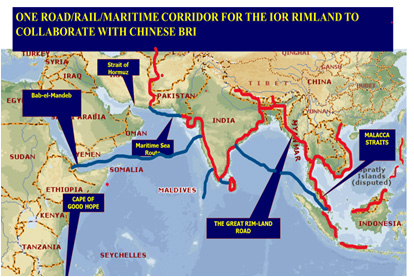 Threats for the QUAD

Russia has gone through tumultuous times and is coming in its own under the leadership of President Putin. When on 26 December 1991 Gorbachev announced the world that the USSR ceased to exist and that it would be hither to fore divided into 15 independent republics, the world was shocked and hurriedly President Bush came on air in USA and declared that the US had won the cold war. Having relegated the Russian Federation to a back seat, no one their wildest dreams could have imagined that it would become as relevant as it is today, albeit still a shadow of its strong past.

Working relentlessly towards its core natural interests it was only a matter of time that the Crimean Peninsula came in the lap of the Russians which had been traditionally housing their only warm water fleet ie, in the Black sea. Having been restricted by the Bosphorus Straits and the Dardenneles for centuries, the Russians had to maintain their interest in Syria where they have enjoyed a Military port facility at Latakia. Aligning with Iran to fight the ISIS was a geostrategic necessity.

It is also but natural that some of the weak electron states which had broken away from Russia and have a sizeable Ethnic Russian population, get pulled by the strong gravitational pull of the Russian core.

Geopolitically a lot will continue to happen in Heartland Europe which will have long term strategic implications due to the involvement of NATO and the Cold war baggage being carried even today. The question is whether the world should keep them from fighting the scourge of Terrorism as a combined lot and say, get semblance in the Economic and Strategic power equation with China which is tilting steadily in its favour.

Russia in the meantime has also entered with China in an unequal partnership where China is playing the dominant role. China has through a geostrategic masterstroke (which can be compared to Hitler’s treaty with Stalin before the start of the second world war) resolved all border disputes with Russia.

It is very evident from the above analysis that Chinese forays into the Eurasian heartland are primarily for Economic reasons and towards the rim-land of the Indo-Pacific(including towards Eastern Russia) for Strategic reasons. Presently it is cruising at great speed as it has forayed into areas wherever it felt there was a decisive void. The world is being dealt with by the Chinese in a piece meal manner, bilaterally, as it suites China. Make no mistake that it is following a planned path, for what is long term for many in the world (say 30 years-time horizon) may be short term for China.

As it progresses patiently, the Juggernaut grows and will shortly have clear cut global ambitions like Hitler’s Germany before the second great war.

It becomes the duty of all powers mentioned in the analys is above to join hands and do concrete actions in the ‘Opportunities dimension’ ASAP otherwise we may see many a war and strife in the future. A road for a road today may degrade Chinese unilateralism and thereby prevent the loss of millions of lives in the future.

By no means do I propose to the world to choke the ambitions of a developing China, but only make conditions for it to become collaborative. If concrete steps are not taken immediately there is only one country winning twice in a win-win relationship being proposed by the Chinese in their BRI and there are no prizes for guessing who.

One thought on “A Road For a Road- Blocking Chinese Unilateralism”