During the Kargil conflict of 1999, the Pakistani Army shot down a plane of the Indian Air Force. The Hizbul Mujahideen (HM), an Indian terrorist organization whose leader Syed Salahuddin is based in Pakistan, claimed responsibility for the shooting. Subsequently, the R&AW intercepted a telephone conversation between Lt.Gen. Mohammad Aziz, the then Chief of the General Staff (CGS), and Musharraf, who was then in Beijing. In that tape, which was released by the Government to the media, Aziz clearly said that the Army shot down the Indian aircraft and asked the HM to claim responsibility. Musharraf replied: “Very good.”

It is very difficult to carry out an operation of this nature by a group of Pakistanis without at least the logistic support of some Indian Muslims. India’s home-grown jihadis fall into two groups.

The first group consists of those who have joined the LeT and the HUJI and have been helping them. These are the fifth columnists in the Indian Muslim community. The second group consists of those calling themselves the Indian Mujahideen (IM), who maintain they have no links with the ISI or the Pakistani jihadi organizations. The IM was responsible for the serial explosions in many cities since November 2007. It also claimed responsibility for the Mumbai suburban train blasts of July, 2006. There was no evidence to show that the IM might have been involved in the 26/11 terrorist strike. The involvement of the group of fifth columnists is a strong likelihood.

The Mumbai Police’s conclusion was that only two Indian Muslims — Faheem Mohammad Ansari and Sabauddin Ahmed — were involved in collecting topographical information long before the terrorist strike. Vital information such as the stay of some Jewish people in the Narriman House and about the fact that the Taj Mahal Hotel had little security at the back entrance through which the terrorists reportedly entered did not appear to have come from these two Indian Muslims. This information could not have been collected through the Internet. How did the LeT get such operationally vital information? It could have got it only from some local accomplices or by a previous visit to Mumbai for local enquiries.

In a telephonic message to the British Broadcasting Corporation (BBC) in the second week of February, 2009, Mustafa Abu-al Yazid, who has been projected since 2007 as in charge of Al Qaeda operations in Afghanistan in liaison with the Neo Taliban of Mulla Mohammad Omar, warned India in the following words: “We send a short and succinct message to the Indian Government.

The Mujahideen will never allow you to invade the Muslims and their lands in Pakistan. If you beguile yourselves into doing this, know well that you will pay a very heavy price, which you will regret much. We will call upon our whole Muslim nation, its Mujahideen and its martyrdom squads against you. We will strike your interests and your economic lifelines wherever they may be until you are demolished and bankrupt as America is being demolished and going bankrupt today.

The Islamic nation which produced the audacious and heroic martyrs of Bombay, who struck you in the midst of your homes and humiliated you, is able to produce thousands more like them. You cannot be more powerful or have more ability than the Soviet Union which was destroyed on the rocks of the Afghanistan mountains nor Americans whose nose we rubbed in the dirt of Afghanistan, Iraq and Somalia.” The authenticity of the message could not be established.

In one’s anxiety to get as much information as possible from the captured terrorist, one did not seem to have paid attention to the important aspect of debriefing all the foreign survivors in the two hotels attacked as to what exactly happened. All of them, after their release, immediately went back to their respective countries .We do not have their version of what happened inside the hotels. 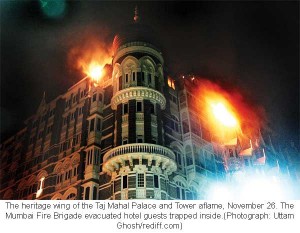 The inadequacies of our intelligence and investigating agencies and of the legal infrastructure against terrorism were known earlier. The startling new revelation was the inadequacies in our physical security apparatus, which made the terrorist strike possible and in our rapid response mechanism, which was brought out by the long time taken to terminate the terrorism situation.

Mumbai is our economic capital. The corporate headquarters of many leading — Indian and foreign — companies are located there. Many of our sensitive establishments, such as the Bombay High off-shore oil installations and some nuclear establishments are also located there. One would have, therefore, expected that our physical security infrastructure in Mumbai would have been the strongest. Instead it was found to have been very weak and was unable to deny success to the terrorists despite the availability of advance intelligence about the LeT’s plans for a sea-borne act of terrorism. If it was so weak in Mumbai, one had reasons to be worried regarding the shape of the physical security infrastructure in other cities.

The terrorist strike and its sequel brought out the totally disjointed manner in which our entire counter-terrorism machinery — the intelligence agencies, the Armed Forces, particularly the Navy, the Police, the National Security Guards, the National Security Council Secretariat (NSG) and the Joint Intelligence Committee — were functioning without any synergy in thinking or action. While the poor reflexes of the Police in dealing with terrorism were known earlier and had been crying for attention for many years, the poor reflexes of the Navy — particularly on the West Coast, which is the most vulnerable to terrorist attacks by sea — were a matter of concern. After 9/11, we have been holding joint counter-terrorism exercises with many countries, including China. No such exercise seemed to have been held among the various agencies of our counter-terrorism community in order to test periodically their ability to act jointly in specific situations. 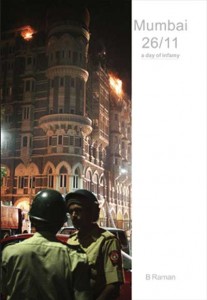 Our counter-terrorism strategy is a fits and starts strategy. In our preoccupation with handling the sequel to the Mumbai strike, we should not lose sight of the investigation into the serial blasts in Uttar Pradesh, Jaipur, Bangalore, Ahmedabad and Delhi, which involved home-grown jihadis. There is very little progress in identifying the command and control of the so-called Indian Mujahideen (IM) and in taking action to neutralize it. The threat posed by the home-grown jihadis has not diminished. On the contrary, it could increase further due to copy-cat effects of Mumbai.