The head of Israel’s counter-terrorism department, Colonel Nitzan Nurieli, said: “We have to acknowledge that in the Mumbai case our intelligence services did not have adequate advance knowledge; nor did the Indian security services.” He urged Israeli tourists to avoid travel to northern India.

Ms Tzipi Livni, the Israeli Foreign Minister said: “There is no doubt, we know, that the targets the terrorists singled out were Jewish, Israeli targets and targets identified with the West, Americans and Britons. Our world is under attack, it doesn’t matter whether it happens in India or somewhere else. There are Islamic extremists who don’t accept our existence or Western values.”

Israeli counter-terrorism experts compared the Mumbai strike to an attempted sea-borne terrorist strike in Tel Aviv in April 2003, when two British Muslims of Pakistani origin, were allegedly recruited by Al Qaeda, to land by sea in Tel Aviv, seize a large beachside hotel and the nearby US embassy, take hostages and shoot as many as possible. Recruited at London’s radical Finsbury Park mosque (like Shoe-bomber Richard Reid) Asif Muhammed Hanif and Omar Khan Sharif were trained in Syria and the Gaza Strip.

Aziz clearly said that the Army shot down the Indian aircraft and asked the HM to claim responsibility. Musharraf replied: “Very good.”

After the Mombasa attack on Israeli tourists by Al Qaeda in November, 2002, in which 13 Israelis were killed, this was the second most devastating attack on Jewish people outside Israel since 9/11. Some Israeli analysts compared the deliberate attack on Jewish people in Mumbai to the attack on the Israeli athletes at the time of the Munich Olympics in 1972. It was even alleged that the terrorist attack on the Jewish people in Mumbai was handled as incompetently by the Indian counter-terrorism machinery as the attack on the Israelis in Munich was handled by the then West German counter-terrorism machinery. There were allegations of Indian arrogance — which was compared to the alleged West German arrogance — in reportedly declining to accept Israeli offers of assistance in terminating the terrorism situation in the Narriman House.

Foreign, including Israeli analysts, seemed to have difficulty in accepting the Indian version that only 10 terrorists were involved and that there was no local involvement. Their view was that an operation of this type could not have been carried out by just 10 terrorists and that too without local help. A widespread impression was that in their anxiety to focus on the LeT involvement, Indian investigators might be missing vital clues about an Al Qaeda hand which would be necessary to prevent a repeat of November 26.

While the modus operandi of terrorists coming stealthily by sea and taking the security forces by surprise had been seen in the past in Sri Lanka and Israel, a new MO seen for the first time in Mumbai was what some Israeli experts described as the human cluster bomb tactics. In a cluster bomb, a number of bombets separate from a mother bomb and spread in different directions killing or maiming people in their path. 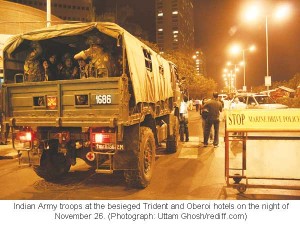 Ten terrorists reached Mumbai, split into four groups and spread in different directions. Two terrorists went round the areas close to the sea front and killed people indiscriminately through hand-held weapons. One of them was killed and another captured — but not before they had killed at least about 70 innocent civilians.

A task of this group apparently was to keep the police preoccupied in hunting for them and to prevent it from going to the main scenes of attack, which had a strategic significance. These were the Taj Mahal Hotel, the Oberoi and Trident hotels, belonging to the same management and located side by side, and the Narriman House.

The delayed response of the NSG and the failure of the local authorities to keep the media out of the scenes of confrontation by imposing a curfew, if necessary, or, at least, by switching off all TV transmissions till the operation was over resulted in three consequences.

Firstly, despite the outstanding bravery of the Police and NSG officers, the credibility of India’s rapid response mechanism was damaged in the eyes of the Indian public and international opinion. Secondly, the TV transmissions even as the confrontation was going on enabled the terrorists to find out what was going on outside without the intervention forces being able to find out what was going on inside. The TV channels unwittingly provided an asymmetric operational advantage to the terrorists. Thirdly, the terrorists received a colossal supply of oxygen in the form of publicity, which could increase the flow of volunteers for more terrorist strikes in future. 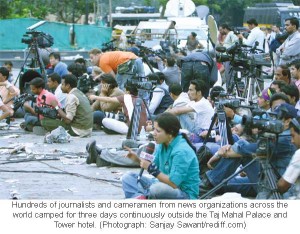 It was evident the terrorist strike had three strategic objectives: firstly, to discredit the Indian political leadership and counter-terrorism apparatus. Secondly, to damage our tourist economy and to create nervousness in the minds of foreign investors about the security of life and property in India. Thirdly, to disrupt the strategic co-operation between India and Israel.

The investigation by the Mumbai Police, assisted by the Intelligence Bureau (IB) and the Research & Analysis Wing (R&AW), had a three-point focus: the role of the LeT and any others involved; the role of the ISI; and a reconstruction of the entire strike.

One got the impression that while the first two received adequate attention, the third did not receive the immediate attention it deserved. Without a satisfactory reconstruction, our ability to prevent a repetition of Mumbai — November 26 in other cities would be weak.

The Mumbai Police and the Maharashtra Government continue to assert, on the basis of the interrogation of the arrested perpetrator that only 10 terrorists were involved. The operation involved detailed intelligence collection, reconnoitering the places to be attacked and the final planning and execution. It is difficult to accept that the same 10 persons performed all these tasks. There definitely must have been more people involved in the conspiracy on the ground in India, in addition to the Pakistan-based conspirators mentioned in the final investigation report of the police — at least performing peripheral roles such as intelligence collection and reconnoitering.

It is very difficult to carry out an operation of this nature by a group of Pakistanis without at least the logistic support of some Indian Muslims.

An organization called the Deccan Mujahideen (DM) was reported to have claimed responsibility in a message sent to the Indian media. Some reports said this message had originated from a computer in Pakistan. The word Deccan refers to South India and was widely used during the British rule. It is now rarely used in India, but in Pakistan it continues to be used widely. Many Pakistanis refer to the Indian Hyderabad as Hyderabad, Deccan, to distinguish it from Hyderabad in Sindh.

After independence in 1947, the ruler of the state of Hyderabad, who was known as the Nizam of Hyderabad, and the ruler of the State of Junagadh in Gujarat, who was known as the Nawab of Junagadh, hesitated to join the Indian Union. Jawaharlal Nehru, the then Prime Minister, sent the Army into Hyderabad to merge it with India. Junagadh also joined India without the need for using the Army there. Many pro-Pakistan Muslims from Hyderabad fled to Karachi and settled down there. 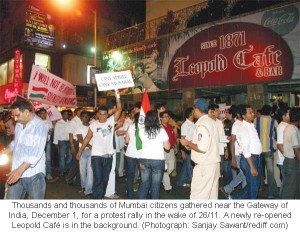 The LeT has long enjoyed some support from the descendents of some Muslims who migrated to Karachi from Hyderabad and Junagadh. It describes Hyderabad and Junagadh as Pakistani territory illegally occupied by India. One of its objectives is to liberate J&K, Hyderabad and Junagadh from what it describes as Hindu rule. It is possible that some of these Muslims originating from Hyderabad were constituted by the LeT into an organization called the Deccan Mujahideen and told to claim responsibility for the Mumbai terrorist strike. The ISI and the LeT are known to adopt this MO of asking someone else to claim responsibility in order to conceal their own involvement.