According to the Hindustan Times ( December 2, 2008), the LeT’s name as the main plotter of a sea-borne terrorist strike in Mumbai directed against some sea front hotels figured in three technical intelligence reports of the Research & Analysis Wing (R&AW) based on intercepts reportedly of September 18, September 24 and November 19, 2008. These reports were more specific than the earlier interrogation reports about terrorist strikes planned in Goa.

However, whereas the reports relating to Goa spoke specifically of Israeli and Western tourists as the targets, the R&AW reports, while indicating that the sea-side hotels in Mumbai preferred by foreign tourists would be the targets, did not speak specifically of Israeli and Western tourists. Nor was there any reference to a planned terrorist strike in Narriman House. Among the hotels reportedly mentioned by the R&AW was the Taj Mahal Hotel.

The terrorists did not appear to have been interested in taking the Jewish people as hostages and using them to achieve any demand. They just wanted to torture and kill all those found in the premises.

The presence of the Jewish centre in the Narriman House was not very well known in Mumbai outside Jewish circles. The fact that the terrorists had come to know about it and had included it as one of their principal targets spoke of their extensive local knowledge and of the enquiries that must have been made by them about Israeli/Jewish offices and places of stay near the sea front. They must have made detailed local enquiries either during an advance visit or through accomplices in the local Muslim community. The knowledge, which they seem to have had about the Narriman House, definitely spoke of some local involvement at least in intelligence collection.

Mark Sofer, the Israeli Ambassador to India, was quoted as saying: “Out of the thousands of buildings in Mumbai, it was hard to believe that the terrorists had stumbled by chance upon the Jewish center.” They did not target the local Israeli Consulate. 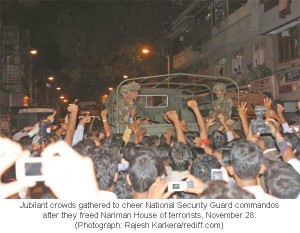 They wanted to kill as many Jewish people as possible and this might not have been possible in the five-star hotels because most Israeli tourists come on a shoe-string budget and stay in cheap hotels away from the sea front. The Narriman House provided a point where many Jewish people — locals, Israelis and Jewish visitors from other countries — congregate. However, since they attacked the place around 10 pm, not many Israelis and other Jewish people were present there. They were able to get only six Jewish people living or temporarily staying in the premises.

The terrorists did not appear to have been interested in taking the Jewish people as hostages and using them to achieve any demand. They just wanted to torture and kill all those found in the premises. A rapid reaction raid into the House might have saved at least some lives, if not all the lives. Shortly after getting information about the forcible entry of two terrorists into the Narriman House, a small police party reportedly reached the scene, but it did not apparently have either the numbers or the capability for immediate intervention. One had to wait for the arrival of the specially-trained National Security Guards (NSGs), which is a special intervention force. It arrived the next morning and took nearly 40 hours to enter the premises. By the time it could force its entry into the building it was late. All the six Jewish people had been killed by the terrorists after torturing them. Only an Indian maid managed to escape with a two-year-old Jewish child. While the Israeli authorities have praised the role of the Indian security forces in dealing with the situation and the co-operation extended by the Government of India, a note of regret over the delayed intervention was evident in some of their remarks.

While acknowledging the complexity of ending the attacks across sprawling Mumbai, Ehud Barak, the Israeli Defence Minister, told an Israeli TV channel on November 28: “I’m not sure it had to last three days, but that’s what happened.” Barak told Channel 1 Television that the bodies of two women and three men had been found at the religious-cum-cultural centre. The body of a third woman was found later in the building. Barak added that some of the bodies had been tied up, and that two women had been killed many hours before. “All in all, it was a difficult spectacle,” he said. 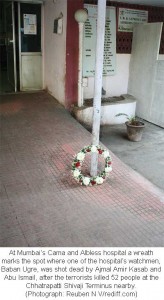 One could discern notes of criticism in the comments of retired security experts and other private experts too. A former head of Israel’s Mossad external intelligence agency, Danny Yatom, said the attacks revealed major failings in Indian intelligence as they “involved dozens of terrorists enjoying the support of numerous sympathizers.” “It is vital that the Indian security services draw the necessary lessons,” Yatom told a local radio station.